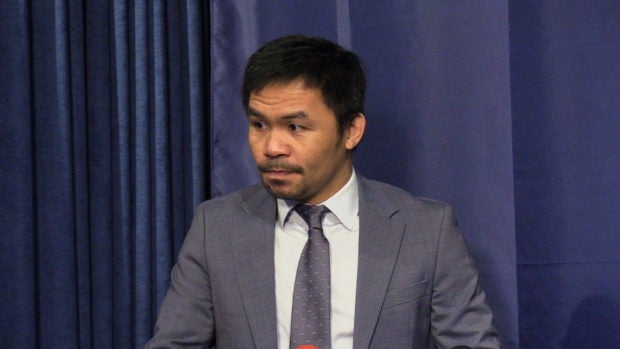 Sen. Manny Pacquiao is chided by  President Rodrigo Duterte for his criticism of the administration’s stand on the West Philippine Sea. INQUIRER.NET PHOTO/CATHY MIRANDA

MANILA, Philippines — President Rodrigo Duterte chided Senator Manny Pacquiao and advised him to “study” after the latter criticized the chief executive’s stance on the West Philippine Sea issue as lacking in substance.

“It’s about foreign policy. I would not want to degrade him but next time he should, mag-aral ka muna nang husto bago ka pumasok,” Duterte said in an interview with Pastor Apollo Quiboloy when sought to comment on Pacquiao’s remarks.

(It’s about foreign policy. I would not want to degrade him but next time he should study diligently.)

“Apparently this guy has a very shallow knowledge,” he added.

Pacquiao said earlier that Duterte’s stance on the disputed waters had softened compared to when he was running for the presidency.

The senator recalled that prior to his election as president, Duterte had promised to go to the West Philippine Sea and plant the Philippine flag.

(We heard what he said before the elections as he was campaigning that he was going to ride a jet ski carrying the Philippine flag to the Spratlys, so of course, I felt it in my heart to vote for him because that’s the kind of president that we need; someone who will fight for our country.)