Robredo: DQ case against Bongbong doesn’t matter to me 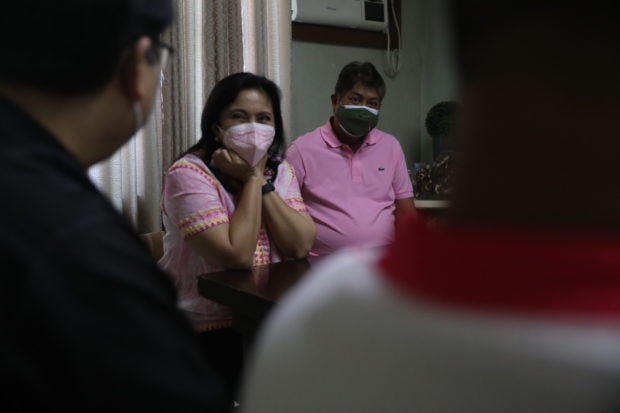 MANILA, Philippines — Vice President Leni Robredo is puzzled by insinuations that the opposition is behind Bongbong Marcos’ disqualification case, saying they should have filed that way back in 2016 when they competed for the vice presidency.

Robredo said she doesn’t need to file a disqualification case against Marcos for their upcoming presidential campaign in 2022, since she beat him in 2016 without such measures.

(For me, it doesn’t make sense.  If we wanted to have Marcos disqualified, we should have done that during our VP race in 2016.)

(And also, if the purpose of the disqualification case is to remove him from this contest, I think that’s unnecessary.  We fought in the 2016 polls, and we won without a disqualification petition.)

Robredo declined to comment on the disqualification case against the son of the late dictator and former president Ferdinand Marcos as she prefers to focus on pressing concerns like the COVID-19 response.

Last Tuesday, a petition was filed before the Commission on Elections (Comelec) urging the poll body to cancel Marcos’ certificate of candidacy (COC) for president, citing his conviction in 1995 by the Quezon City Regional Trial Court for failure to file income tax returns.

According to former Supreme Court spokesperson and lawyer Theodore Te, who helped the petitioners file the case, Marcos’ COC has “multiple false material representations” as he did not state that he got a final conviction for a tax evasion case.

“Specifically, Marcos falsified his Certificate of Candidacy when he claimed that he was eligible to be a candidate for president of the Philippines in the 2022 national elections when in fact he is disqualified from doing so,” they said.

“Marcos is not eligible to run for any public office as he is, plainly, a convicted criminal. Marcos was convicted by the Regional Trial Court of Quezon City in a July 27, 1995, Decision for his multiple failures to file income tax returns,” the petitioners added.

However, Marcos’ camp dismissed the disqualification case as nothing but propaganda.  In an interview with Teleradyo, Marcos’ lawyer Vic Rodriguez said that the so-called propaganda was launched by people he labeled as “yellow wannabe political assassins.”

In political discussions in the country, the color yellow has long been associated with the Liberal Party (LP), which uses the color for its motif.

Although Robredo is running for president in 2022 as an independent candidate — and while she appears to use the color pink for her campaign — she is still being associated with LP as she remains the party’s chairperson, while her slate is composed of longtime LP members.

Robredo and Marcos, bitter rivals of the past elections, were toe-to-toe in the 2016 vice presidential race, with the incumbent Vice President edging Marcos by just a little over 260,000 votes.

Marcos launched a poll protest against Robredo, but the Supreme Court, sitting as the Presidential Electoral Tribunal, unanimously dismissed Marcos’ complaint for lack of merit as recounts revealed Robredo’s votes increased, widening the gap between them even more.