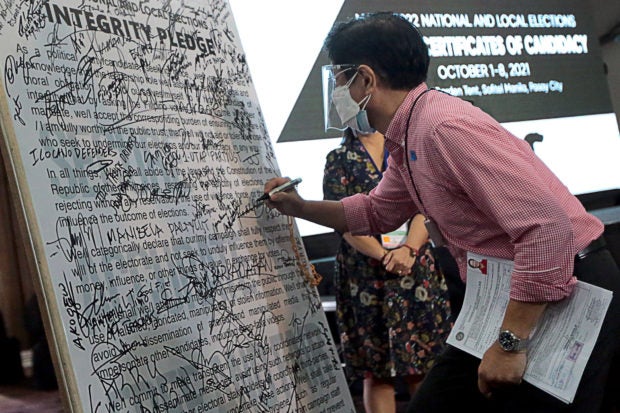 Also filing his COC for president is former Sen. Ferdinand “Bongbong” Marcos Jr., who has yet to name his running mate. (File photoPHOTO BY GRIG C.MONTEGRANDE  (FILE PHOTO)

MANILA, Philippines — Several groups on Tuesday asked the Commission on Elections (Comelec) to disqualify former Sen. Ferdinand Marcos, a defeated vice presidential candidate in 2016, from running for president in next year’s elections due to his criminal conviction in a tax case 26 years ago.

In their petition, the groups representing political detainees, and human rights and health rights advocates that opposed the Marcos dictatorship said the son and namesake of the late dictator falsely claimed in his certificate of candidacy (COC) that he was eligible to run for president “as he is plainly a convicted criminal.”

Comelec spokesperson James Jimenez said that under the law, a person must be convicted of a crime involving “moral turpitude,” or for an offense where the penalty is at least 18 months in jail to be disqualified.

“He doesn’t meet this criteria. Right now there is no clear case for disqualification,” he told One News television.

Marcos was convicted by the Quezon City Regional Trial Court Branch 105 on July 27, 1995, for failure to file income tax returns and pay income taxes from 1982 to 1985. He was sentenced to serve a total of seven years in prison and ordered to pay a fine for several counts of violation of the National Internal Revenue Code (NIRC).

Marcos appealed to the Court of Appeals (CA), which ruled on Oct. 31, 1997, to uphold the conviction but modified the penalty by deleting the prison term and merely imposing a fine.

“While it was improper for the Court of Appeals to disregard the penalty of imprisonment in the conviction of Marcos Jr., the absence of any appeal only affirms the incontestable fact that Marcos Jr. is a convicted criminal,” the petitioners told the Comelec.

Since he withdrew his appeal to the Supreme Court of the appellate court’s decision, his conviction became final.

“Having been convicted by final judgment of a violation of the National Internal Revenue Code, Marcos is perpetually disqualified from holding any public office, to vote and to participate in any election as mandated under the NIRC,” the petitioners said.

They said the crimes for which Marcos was convicted by a final judgment are considered crimes involving moral turpitude, another ground to disqualify him from being a candidate for any office under Section 12 of the Omnibus Election Code.

The petitioners said that the crime involved moral turpitude “since, among others, Marcos and his family refused and continues to refuse to pay to the Filipino people roughly P203.8 billion in estate taxes, inclusive of interests, surcharge and other penalties.”

This was the amount in unpaid taxes due on the estate of the dictator who died in exile on Sept. 29, 1989, three years after the Marcoses were driven out of Malacañang by the 1986 Edsa People Power Revolution, according to the petitioners.

They said that under Section 252 of the 1977 NIRC (now Section 253) “the mere fact that Marcos Jr. was convicted of violating the NIRC perpetually disqualifies him from holding any public office, to vote and to participate in any election.”

“The conviction of Marcos Jr. in the tax evasion cases carries the mandatory penalty of imprisonment of more than 18 months as imposed by law, disqualifying him under the Omnibus Election Code from running for any public office,” they added.

The petition was filed by Fr. Christian Buenafe, who is co-chair of the Task Force Detainees of the Philippines; Fides Lim, chair of Kapatid-Families and Friends of Political Prisoners; Ma. Edeliza Hernandez, executive director of Medical Action Group; Celia Sevilla, secretary-general of Families of Victims of Involuntary Disappearance; Roland Vibal, a member of the council of leaders of the Philippine Alliance of Human Rights Advocates; and Josephine Lascano, executive director of Balay Rehabilitation Center Inc.

Since the Marcos family’s return from exile in 1992, Marcos has run for and has been elected to various posts.

In 2010, he was elected senator. In 2016, he lost the vice presidential race to Leni Robredo, who is now running for President.

The Supreme Court granted his motion to withdraw his appeal in 2001 and since the solicitor general did not file his own appeal, the decision of the CA became final and executory.

In his Oct. 28 column in the Inquirer, retired Supreme Court Senior Associate Justice Antonio Carpio discussed the tax case and said that “Marcos Jr. cannot now be disqualified on the ground that he was sentenced to imprisonment for more than 18 months because there is no such sentence by the CA.”

“However, a case can be made out that the repeated failure to file income tax returns from 1982 to 1985 amounts to moral turpitude,” Carpio said.