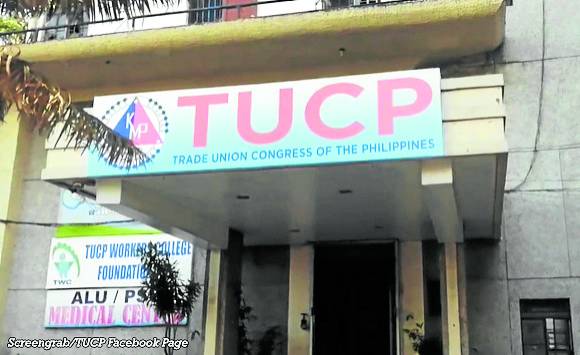 MANILA, Philippines — In a seeming “pattern,” another labor organization has reported experiencing police harassment similar to that reported by the Trade Union Congress of the Philippines (TUCP) on Nov. 2.

The Sentro ng mga Nagkakaisa at Progresibong Manggagawa (Sentro) on Thursday said persons claiming to be from the Quezon City Police District (QCPD) barged into its office also on Tuesday.

Sentro said the supposed police officers presented neither IDs nor a search warrant but repeatedly asked the staff for information on the organization’s office and member-unions and their activities.

On Wednesday, TUCP reported that six armed policemen, some in plainclothes, burst into its compound in Diliman, Quezon City, on Nov. 2 and demanded the whereabouts and home addresses of its officers.

It said a blue and white police vehicle of the Philippine National Police Criminal Investigation and Detection Group (PNP-CIDG) with the marker QC-76 and plate No. SKM 714 entered its compound without a search warrant and without seeking permission.

TUCP party list Rep. Raymond Mendoza, also the organization’s president, denounced the police intrusion into the compound, saying it was the fifth such incident there.

The PNP chief, Gen. Guillermo Eleazar, on Thursday said he had ordered an inquiry into the incident reported by TUCP.

Sentro and TUCP both condemned the police actions on their respective offices.

The labor coalition Nagkaisa wrote to Labor Secretary Silvestre Bello III on Nov. 3, calling on him to put an end to all “acts of intimidating or harassing trade unionists.”

“We urge you to meet with union leaders and engage in a meaningful dialogue on how the PNP can truly help uphold the constitutional right to freedom of association,” wrote Nagkaisa chair and senatorial candidate Sonny Matula.

Mendoza said similar police intrusions had occurred in the offices of TUCP affiliate organizations in Mindanao.

“This is a clear act of harassment intended to send a chilling message to the trade union movement, and specifically to cow TUCP in its advocacy and union organizing work in both the private and public sectors,” he said in a statement.

Mendoza said the cops “arrogantly” went around the premises, took photos of the attendance logs, and interrogated the TUCP staff.

“We feel that the pattern to scare off legitimate labor groups is patently clear. What they are doing to TUCP is deeply alarming in this time of profiling and ideology tagging of labor groups,” he said.

Eleazar said he had directed the CIDG and the QCPD “to look into the allegation against our personnel.”

“We need to identify who these personnel are, and they need to explain what was the reason for their unintended visit,” he said, adding that the investigation would determine if the policemen had followed PNP protocols.

According to Eleazar, the policemen’s action may be “their own initiative” because the PNP leadership did not issue orders for such an operation.

“The PNP has taken note of TUCP’s complaint and we will seriously look into this. We will take the necessary action against the concerned policemen once it is proven that they have erred in their conduct,” he said.

Eleazar also said he would personally monitor the updates on the investigation of the incident involving TUCP.

Mendoza said the police intrusion was “a direct assault on the constitutional rights of workers” and a violation of the International Labor Organization (ILO) Conventions 87 and 98, which the Philippines had ratified.

Last September, another major labor group, the Kilusang Mayo Uno (KMU), filed a complaint at the ILO regarding attacks on labor leaders and unionists.

KMU said 53 workers had been killed by suspected government agents under the Duterte administration. —With a report from Dexter Cabalza