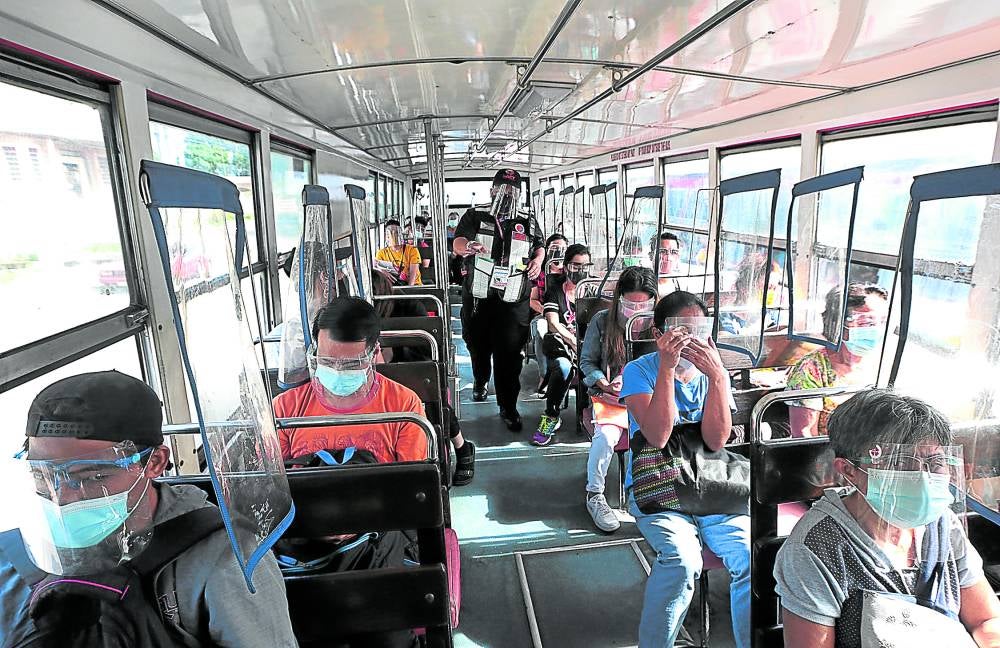 WHAT ‘70 PERCENT’ SHOULD LOOK LIKE A traffic officer boards a bus on Commonwealth Avenue in Quezon City to check if the limit on passenger capacity is
being observed on Thursday, the first time since last year that it is increased to 70 percent. —GRIG C. MONTEGRANDE

MANILA, Philippines — Metro Manila will be under the more relaxed alert level 2 for 17 days starting today, according to Malacañang.

Presidential spokesperson Harry Roque announced on Thursday night that the Inter-Agency Task Force for the Management of Emerging Infectious Diseases (IATF) had approved the lowering of alert level 3 in Metro Manila to alert level 2 from Nov. 5 to Nov. 21.

Restaurants, personal care establishments and fitness studios would now be allowed to operate at 50 percent of indoor capacity for fully vaccinated individuals.

These will be the rules for limited in-person classes for higher education and for technical-vocational training; licensure examinations administered by government agencies; film, music and television production; contact sports approved by the local government where the games would be held; funfairs or kid amusement industries; venues with live voice or wind-instrument performers, such as karaoke bars and concert halls; and gatherings with individuals not belonging to the same household.

The announcement followed a report earlier on Thursday by the independent pandemic monitor OCTA Research group that the country had reversed the surge in COVID-19 cases caused by the Delta variant of the coronavirus.OCTA said Metro Manila and other major urban areas were now considered to be at low risk for the virus.

“If we look at NCR (National Capital Region), as of Nov. 3, it’s actually as low as before the surge started in July. Essentially, we have reversed the Delta surge already in the NCR. We’re back to where we were before the surge in July,” David said at the weekly Pandesal Forum.

Among the major areas where the “virus is weakening” were Metro Manila; the provinces of Rizal, Bulacan, Cavite, Laguna, Batangas; and Davao City. Cebu City is the only area at a “very low” risk status with an average growth rate of only 15 infections per day, which David described as the “best case we can see right now.”

All these areas have safe levels of infection and utilization of health-care systems and intensive care units (ICUs) and a negative one-week growth rate.

Zamboanga, Dumaguete However, the average daily attack rate (Adar), or the number of infected individuals per 100,000 population, remained at the moderate level for all areas mentioned, except for Pampanga and Cebu City,

Zamboanga and Dumaguete still have “a significant number of cases” but most of them are already on a downward trend, David said. He cited continuing vaccinations and adherence to health protocols, especially the wearing of masks, as reasons for the decreasing numbers.

The implementation of granular lockdowns at the local level is also a factor, according to David. “I think the local governments are doing a good job with the granular lockdown … That’s helping us prevent outbreaks and superspreader events,” he said.

OCTA on Monday said that with all cities and lone municipality of Metro Manila declared at low risk of experiencing a surge in infections, NCR was ready to shift to alert level 2.The IATF also decided that starting Dec. 1, alert level assignments would be determined every 15th and 30th of the month, but escalations, or the raising of the alert level, may be done at any time as warranted, Roque said. Deescalations, however, can only be done at the end of the two-week assessment period, he said.Under 2K cases again

The positivity rate slightly rose to 6.6 percent after 2,257 individuals were found positive for the coronavirus out of the total 34,190 tested.

The IATF also directed the National Task Force Against COVID-19 (NTF), together with the Regional Task Forces and Regional IATFs, to provide weekly feedback to the IATF on the progress and implementation on all areas identified for alert level system rollout.

It also said that to measure the success of the implementation of the Phase IV of the National Action Plan Against COVID-19, the recovery indices to be used for infection management are the number of severe and critical cases per month, time gap from detection to isolation, and tests per case.

For socioeconomic recovery, the indices are the Purchasing Managers’ Index by information services company IHS Markit, Google Mobility to retail and recreation, and number of commercial airline passengers.

A health expert expressed concern that only a little over half of seniors nationwide have been fully vaccinated.