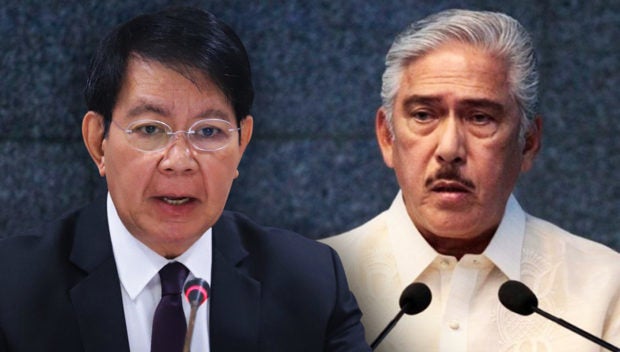 MANILA, Philippines — The tandem of Senator Panfilo Lacson and Senate President Vicente Sotto III are mulling changes in their communications strategy for the 2022 national elections, saying that their messages — their platform — need to be understood by Filipinos.

During a forum with reporters on Thursday, both Lacson and Sotto admitted that messaging plays a vital role in the campaign, adding that they may need to improve their strategies to ensure that people would get what they are saying.

Lacson noted that their approach to the campaign, which is to take things seriously and always respond to issues, might seem boring to some compared to their opponents’ banters and social media tactics.

(Communication is crucial in a campaign, about how you can communicate so that your platform for the country would resonate among the people.  If we lack something in communications, maybe we can adjust our messaging and communications strategy.)

The problem, according to Lacson, is that they speak about issues that might not be heard as much since some people just want to see something funny on TikTok, but some politicians discuss issues on a superficial level.

Likewise, Sotto said that local elected officials had praised their platform and emphasized that it should successfully reach the people.

(What we are seeing, the feedback, it would be a game of messaging.  Our campaign, that of Senator Lacson and our other colleagues, it would rely heavily on the messaging, as messages should reach the people.)

Sotto said they talked to several mayors and governors who said their platform and program need to be understood and shared with the public so they can see that these are the most practical, effective and necessary solutions.

Lacson said that this may be borne out of a serious approach to the issues — that before speaking out on their platform they would first study and seek an expert opinion.

Since these are trying times in history, he said they cannot simply convey messages with lip service or so-so pledges, and if they say something, they will seek expert advice first.

Lacson and Sotto have been upfront with their platform to provide local government units (LGUs) more leeway and power in managing their localities — from development projects and even COVID-19 response.

According to Lacson, the tandem believes that decentralizing the national government — which has become too top-heavy — would usher in development for depressed sectors and rural areas.  On Wednesday, Lacson said that the over-centralization of the national government has also caused problems in the slow-paced COVID-19 vaccination program.

While the team’s message may appeal to many voters, Lacson has lagged in numerous presidential surveys: in Pulse Asia’s study released on September 29, Lacson only had six percent of the votes if elections were held during the survey dates.

On the other hand, Sotto leads the race in the same survey, getting approval from 25 percent of the respondents.

READ: Lacson on Sotto’s high survey rankings: Seems he can already be declared as VP

But Lacson says he is unfazed by the low survey rankings, as he thinks the elections are still a close race with the campaign season not starting yet.