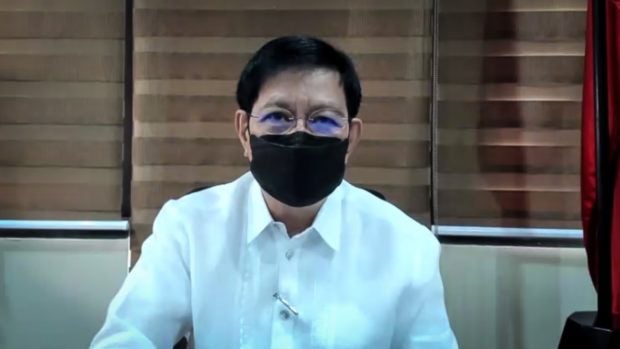 MANILA, Philippines — Senator Panfilo Lacson has assured the public that his advocacy to decentralize the national government and empower local government units instead is hinged on a realistic and concrete formula, contrary to unfulfilled promises of decongesting major cities.

Lacson was asked in a radio interview on Wednesday on how his proposal for the devolution of the national government would differ from past suggestions that were not implemented.

According to Lacson, it would start with the distribution of unused funds to LGUs, to ensure that progress reaches the countryside — things indicated in the Budget Reform Advocacy for Village Empowerment (BRAVE) bill that he filed in 2019.

(We have a formula for that and our proposals are concrete and realistic.  I don’t know how it works for others also advocating devolution, empowerment, but our proposal has been clear.)

According to Lacson, the centralized nature of the current government also causes problems to the COVID-19 response, as there is too much control in the decision-making, instead of being just a supervisor who would check if LGUs are working properly.

As an example, he said that the national government could allow the private sector and rich LGUs to procure their own COVID-19 vaccines.

(Second, we have rich and capable LGUs who are willing to buy vaccines, but what happens is that they control — not just supervise — procurement through the tripartite agreement.  That is okay too, but why don’t we widen the scope, let’s open it for those who will voluntarily buy vaccines, let us give them leeway.)

The national government is expected to cede some of its functions to LGUs after the Supreme Court’s Mandanas ruling starts taking effect in 2022.  Under the decision, the LGUs’ Internal Revenue Allotment (IRA) would come from 40 percent of all tax collections, and not just from the national internal revenue tax.

This would provide LGUs a higher IRA, at around P1.1 trillion for local governments across the country.

Still, Lacson said that there is much to do, and the national government should start releasing some of its control on LGUs.

(It’s about time na that we give LGUs the power to decide, we would just install safeguards like increasing accountability by requiring them to regularly report.)

“I think I started this in 2014 or 2015, the Budget Reform Advocacy for Village Empowerment where we would bring down funds to LGUs, we activate the local development councils, and let them decide on cohesive, inclusive local development plans, which they would implement.)

Lacson is trying to make a second run for the presidency in the 2022 polls, this time teaming up with Senate President Vicente Sotto III.  The tandem has vowed to address problems hounding government today, by restoring people’s trust and pushing widespread development.