Chinese firms profit off PH amid the pandemic | Inquirer News

Chinese firms profit off PH amid the pandemic 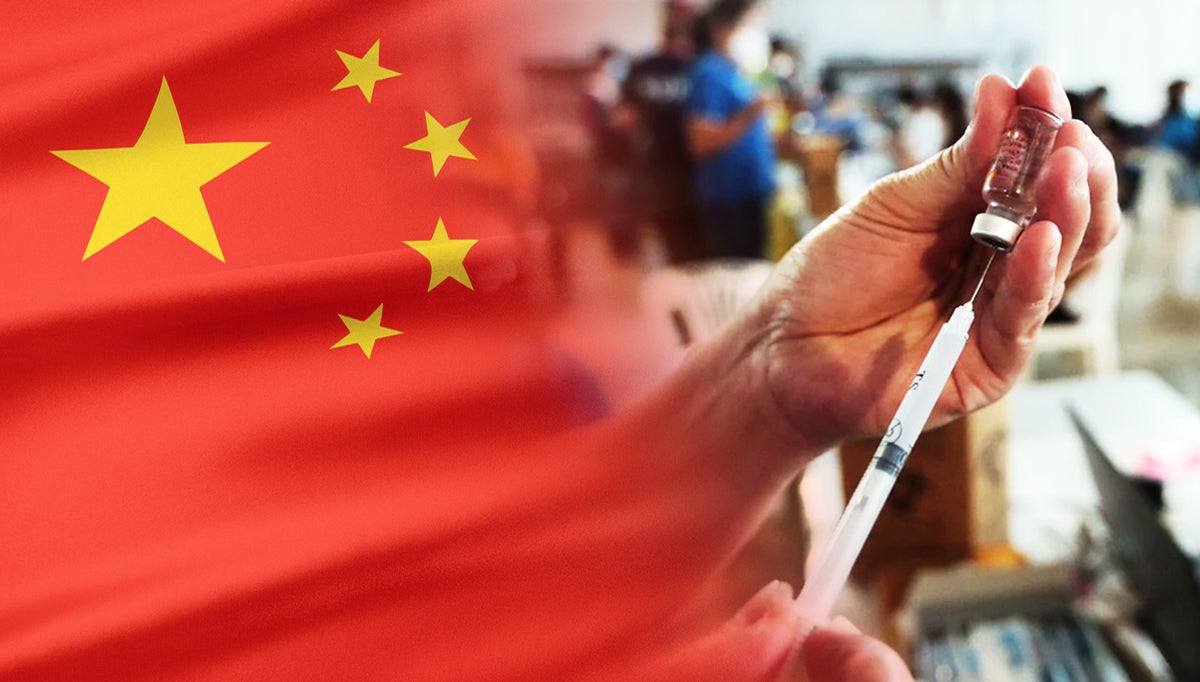 MANILA, Philippines—The ongoing Senate investigation into transactions between the Department of Health (DOH), Procurement Service-Department of Budget and Management (PS-DBM), and foreign firm Pharmally has slowly shed light on how the government seemed to prefer Chinese-owned firms for COVID-19 supplies.

How much have these Chinese firms earned from transactions with the Philippine government during the pandemic? How did this affect workers of Filipino companies?

The cost of vaccines

Data from the Department of Health (DOH) and the National Task Force Against COVID-19 showed that as of Oct. 28, a total of 99,551,290 doses of vaccines have already arrived in the country.

Seven brands of vaccines have been approved and are being administered to recipients. These were:

READ: Here’s what you need to know about Sinopharm’s COVID-19 vaccine

Among these seven vaccine brands, most doses delivered to the Philippines were manufactured by two Chinese-owned companies, one of them owned by the Chinese government. 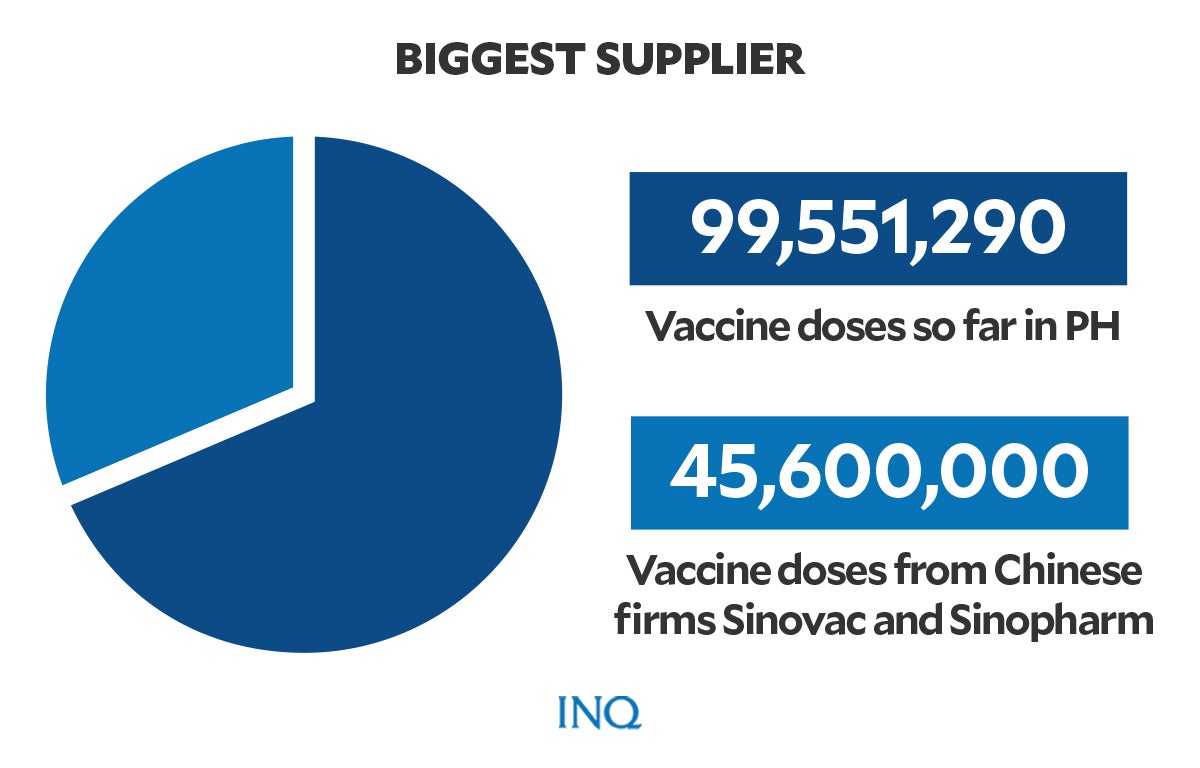 Combined, a total of 45,600,000 vaccine doses from Sinovac and Sinopharm—the Chinese government-owned firm—have arrived in the Philippines since it started its national vaccine rollout last March.

The figures correspond to 45.81 percent of the Philippines’ total vaccine supply.

On the other hand, around 1,100,000 doses of Sinopharm vaccine have been delivered.

You might ask, how much did we pay for those vaccines?

As of Oct. 28, there were a total of 44,500,000 doses of the Sinovac vaccine in the Philippines. Not all of those, however, were purchased by the Philippine government. 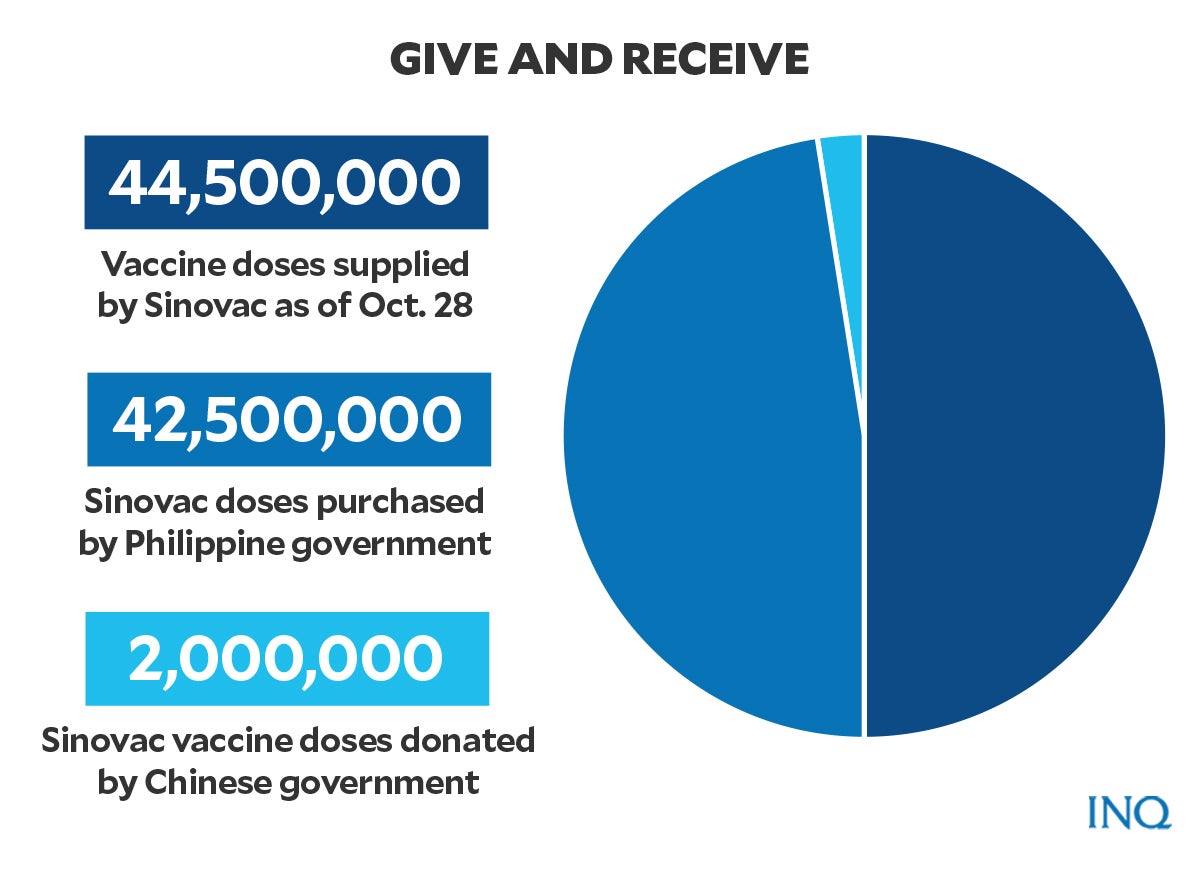 At least two million doses were donated by China, which means that the government paid for around 42,500,000 vaccine doses.

Meanwhile, all doses of the Sinopharm vaccine that were sent to the Philippines were donated.

It is not clear how much the different vaccine doses purchased by the Philippines cost, especially the vaccines produced by Sinovac.

Earlier this year, some senators expressed alarm at alarm at varying prices of Coronavac, the vaccine made by Sinovac.

Vaccine czar Carlito Galvez Jr. explained that the market price of Sinovac’s vaccine is only $26.5 per dose and that the Philippines was able to negotiate a lower price.

Galvez did not disclose the exact price of the vaccine, but he said that it would not be more than P700. 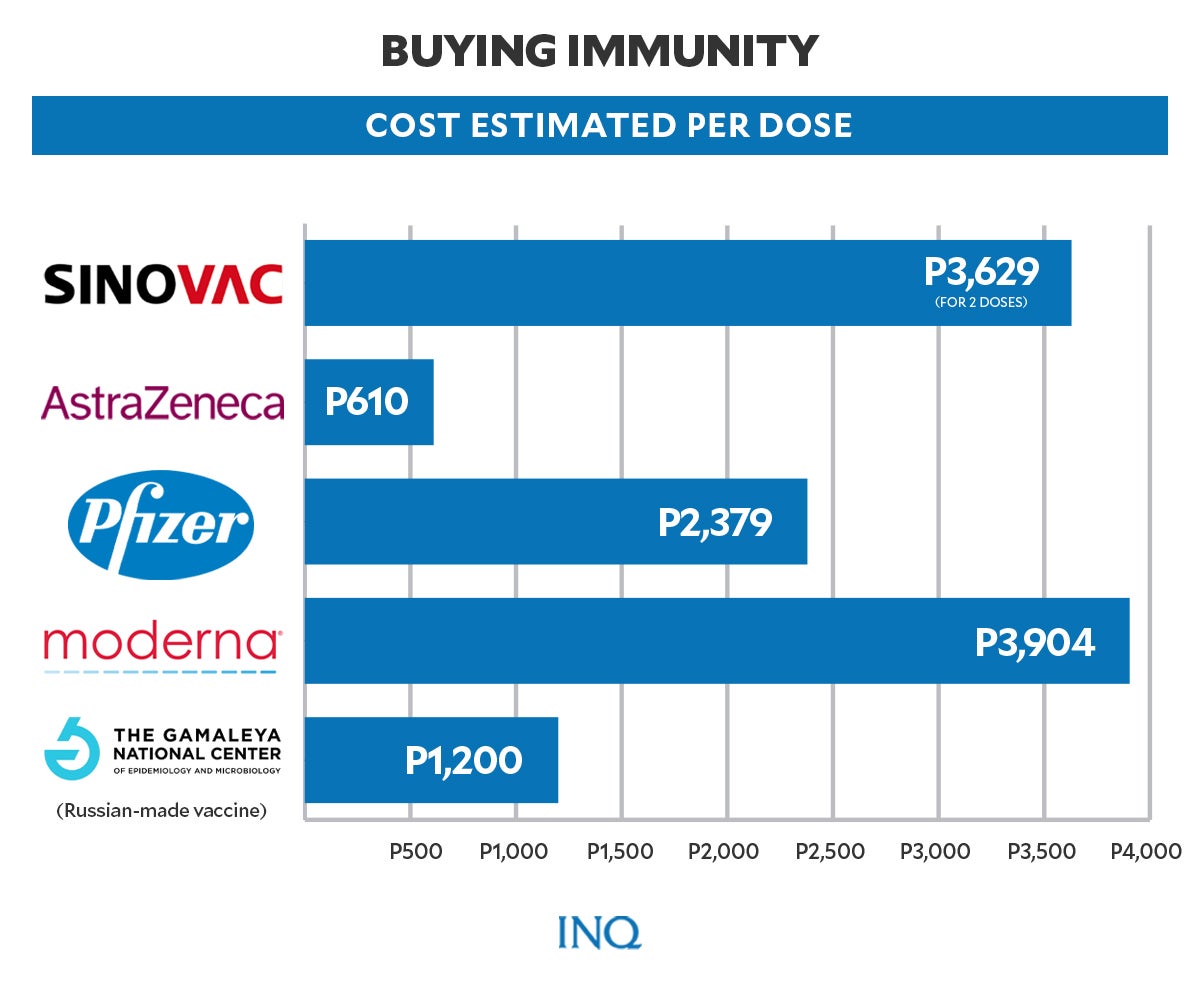 However, in December 2020, Senate committee on finance chair Sonny Angara released a list showing the estimated prices of different vaccine brands for two doses per person.

The price list showed that Sinovac’s CoronaVac costs around P3,629 for two doses. 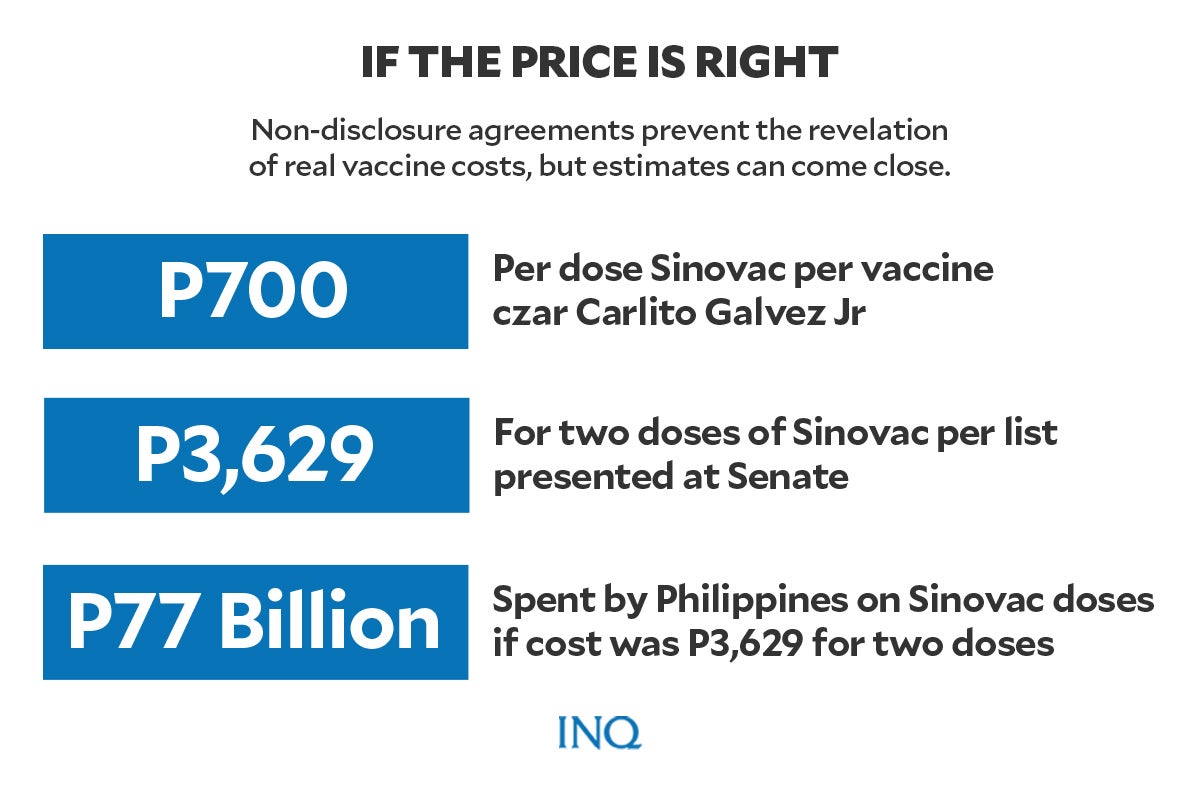 Before the controversy over overpriced personal protective equipment (PPEs), face masks, and COVID test kits from foreign-owned company Pharmally Pharmaceuticals Corp (Pharmally) surfaced, there were already traces of overpriced PPE sets procured by the Philippine government from China in 2020.

In September 2020, opposition Sen. Risa Hontiveros presented details of the hefty amounts of PPE sets from China bought by the Philippines which she described as “overpriced.” 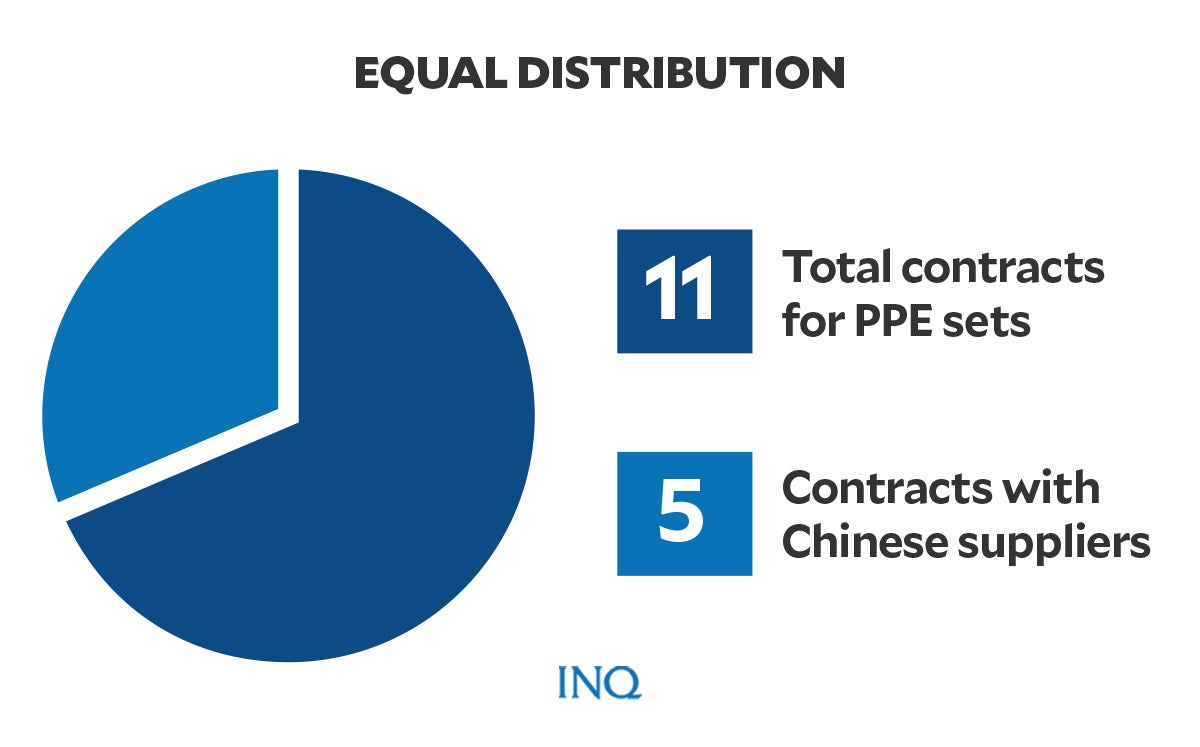 Hontiveros said of the 11 contracts that the Department of Budget and Management (DBM) entered into for PPE sets in April and May 2020, five were with Chinese companies. 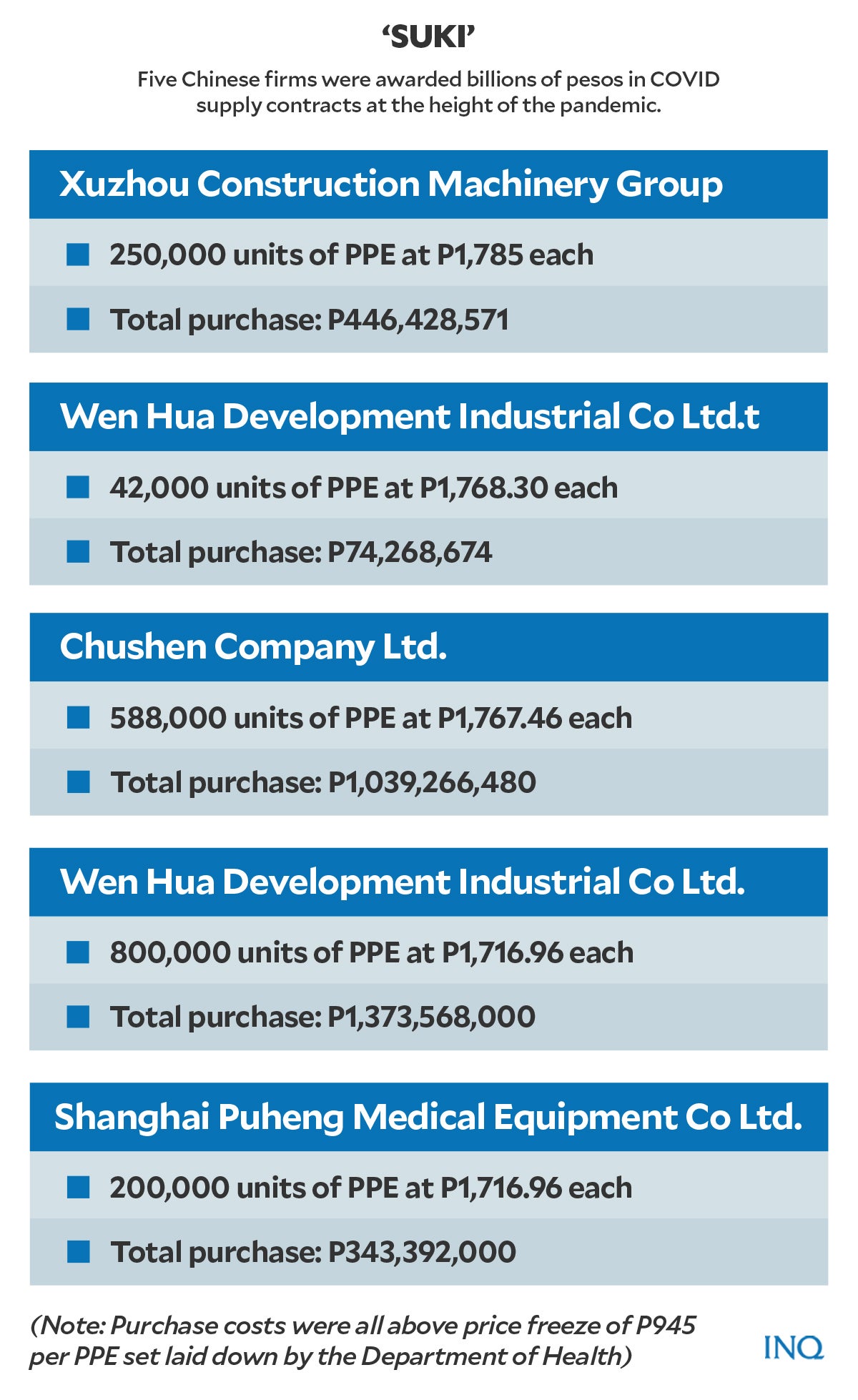 The senator said that from March 23 to April 13, the DOH set a price freeze for medical equipment and supplies needed for COVID-19 response.

Around that time, the price of PPE sets should have a maximum cost of only P945 per set.

According to Hontiveros, three out of the 11 contracts came in the same period as the price freeze in 2020, meaning the price of a PPE set should have cost a little less than P1,000 if procured from local companies.

However, the Procurement Service of DBM (PS-DBM) disputed Hontiveros’ claim and explained that the government saved P800 million in its multibillion-peso supply contracts with Chinese manufacturers at the height of the COVID-19 lockdown.

The then-head of the PS-DBM, Lloyd Christopher Lao, said that the government saved money “by dealing directly with manufacturers and accredited distributors.”

He added that the money saved can be used for additional PPE sets and other COVID-19 response items that the Department of Health (DOH) needed to bolster the government’s fight against the pandemic.

The Philippine government had separately purchased another 1 million PPE sets, worth P1.8 billion, from China to support health workers and those on the frontline of the battle against COVID-19.

During the same period, the Philippine government also bought P126 million worth of lab equipment for coronavirus testing which consists of 45,000 test kits from the Beijing Genomics Institute (BGI). 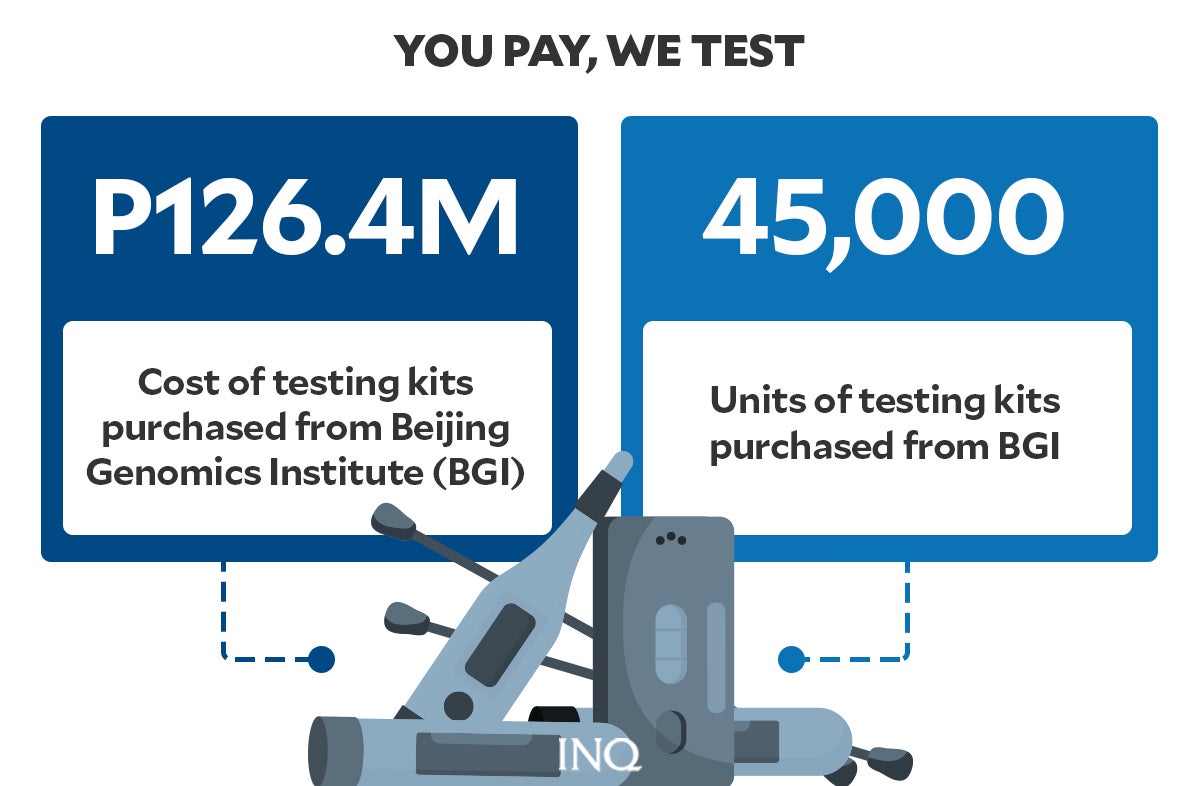 This year, the Senate blue ribbon committee, in a series of hearings the past few weeks, found that the government lost P5 million in its initial purchase deal with foreign-owned company Pharmally.

The little-known company, which was registered at the Securities and Exchange Commission (SEC) on Sept. 4, 2019 by Huang Tzu Yen, a Singaporean, bagged 13 contracts with the Philippine government worth a total of P11 billion—all involving supplies for COVID response—despite having a paid-up capital of only P625,000. 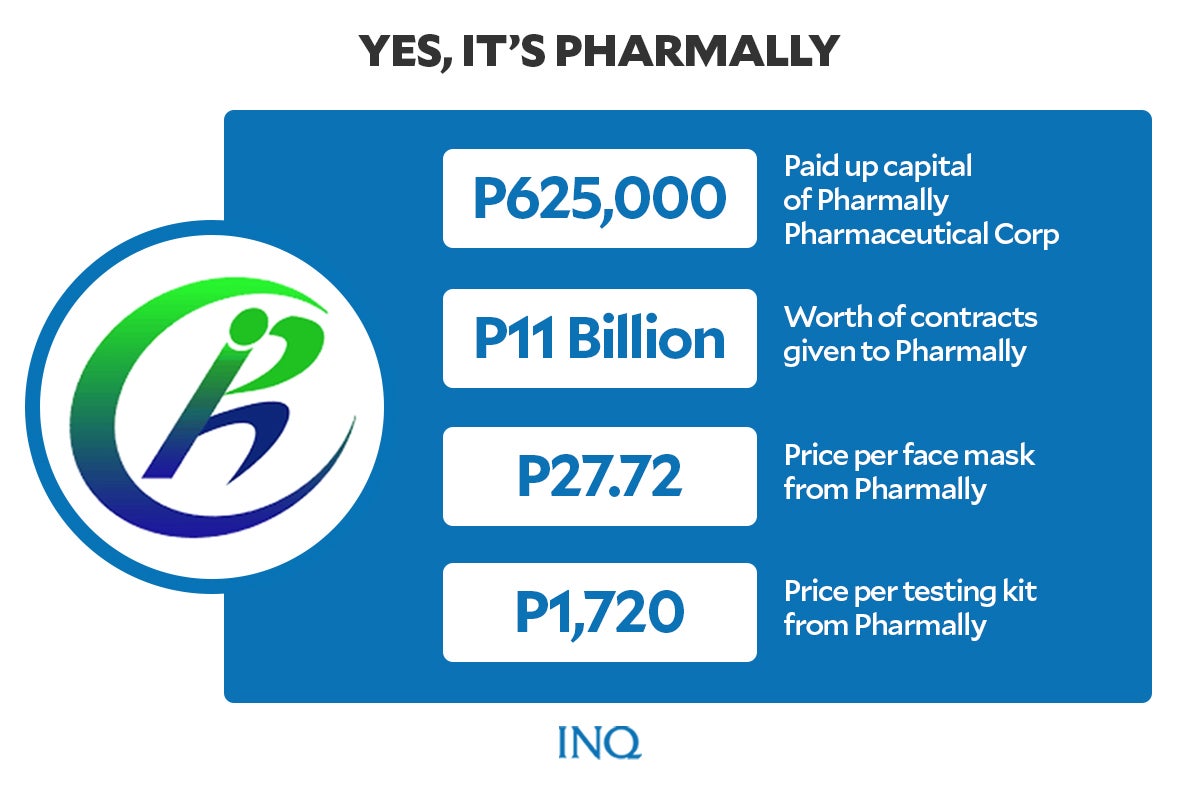 The deals given to Pharmally included supply of PPE sets with markup costs—from face masks that cost P27.72 a piece to COVID test kits that cost P1,720 each —which were more expensive than items from direct suppliers.

READ: Pharmally scandal: When middlemen profit even during a pandemic

In 2020, when the Senate investigated the overpriced PPE deals with Chinese companies, Hontiveros said a local company was found to have a capacity of producing at least 2 million face masks per month while its sister company could produce PPEs.

Still, bulk of contracts for these items was awarded to Chinese firms.

The same thing happened with the P8.7 billion deal between DOH, PS-DBM and Pharmally.

During a Senate hearing last Oct. 28, Confederation of Philippine Manufacturers of PPE (CPMP) executive director Rosette Carrillo belied claims that there has been a shortage of supply from local firms.

“In effect, it is not true that you are running out of masks. True, it’s urgent, but there’s a local source,” Carillo said. 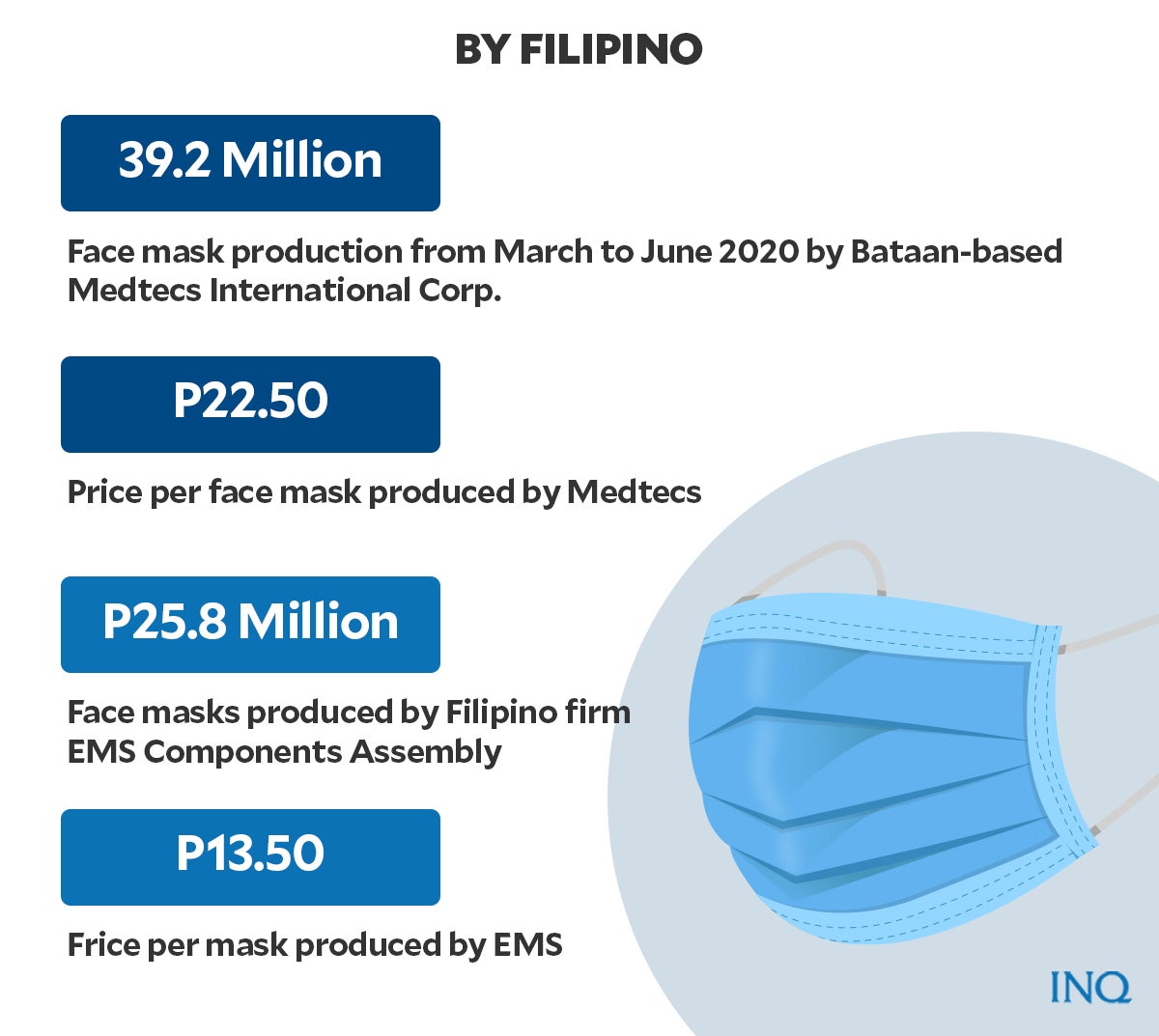 Moreover, the unit price of face masks sold by the local firm was P22.50 per piece.

Another Filipino-owned company, EMS Components Assembly Inc., sold face masks at a unit price of P13.50 per piece when supply started to stabilize.

In a separate statement, EMS chair Ferdinand Ferrer said the company received payments for 25.8 million pieces. Despite its commitment to deliver 8.5 million face masks monthly, its deliveries were often put on hold.

The local companies’ prices were much lower compared to Pharmally’s price of P27.72 per face mask.

Last April, local firms told the Senate that the government’s preference for imported PPEs, mostly from Chinese-owned firms, has cost jobs in the local manufacturing industry which had been told by the government to repurpose their factories for the expected increase in demand for PPEs during the pandemic.

“I think it’s unfair because although it would have saved jobs by telling factories to repurpose, and yet at the same time [the government] disappoints them by not buying their output, their produce,” Sen. Aquilino Pimentel III said.

According to Confederation of Wearable Exporters of the Philippines (Conwep) Executive Director Maria Teresita Jocson Agoncillo, around 25,400 of a total 120,000 workers in the local sector faced retrenchment from June to December 2020.

Out of the 25,4000 workers who were laid off, 3,500 were from three Filipino firms that repurposed their factories for PPE production.