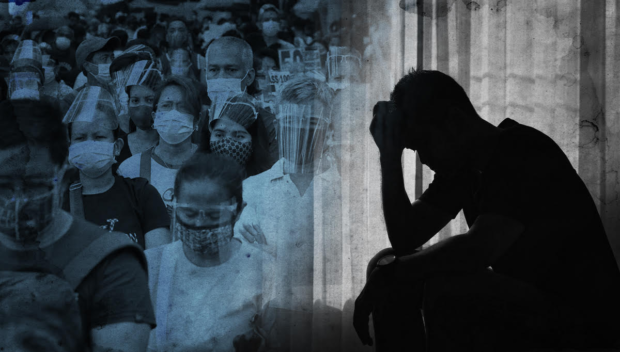 MANILA, Philippines—It was last year when a farmer in Roxas City, Capiz province took his own life after losing his livelihood to the COVID-19 pandemic.

It was not an isolated case, if data from the Philippine Statistics Authority (PSA) would be closely studied.

According to the PSA, deaths because of “intentional self-harm” rose by 57.3 percent in 2020 as the pandemic and resulting lockdowns threw millions of Filipinos out of jobs. 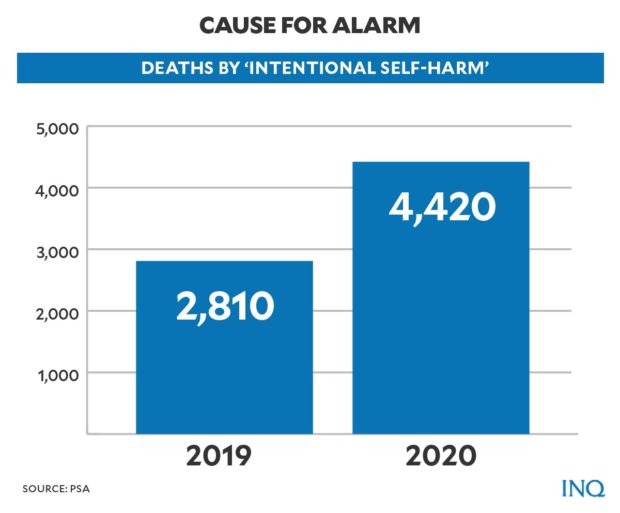 Health expert Lily Orticio (PhD) had written that the rise in cases of deaths by suicide has become a global concern, saying it was due to several reasons, among them loss of work and financial instability.

READ: Rising suicide rates in the time of COVID-19

In 2020, as the Philippines went through its worst recession after World War II, with a gross domestic product (GDP) decline of 9.5 percent, the unemployment rate soared to 10.4 percent, highest in 15 years. 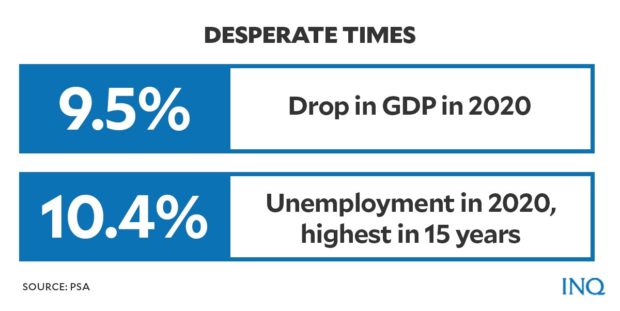 The World Economic Forum had discussed research work that examined the social costs of the 2008 pandemic-driven financial crisis and recession.

The World Bank said the COVID-19 crisis may have increased the poverty incidence in the Philippines from 16.7 percent in 2018 to 21 percent in 2020. 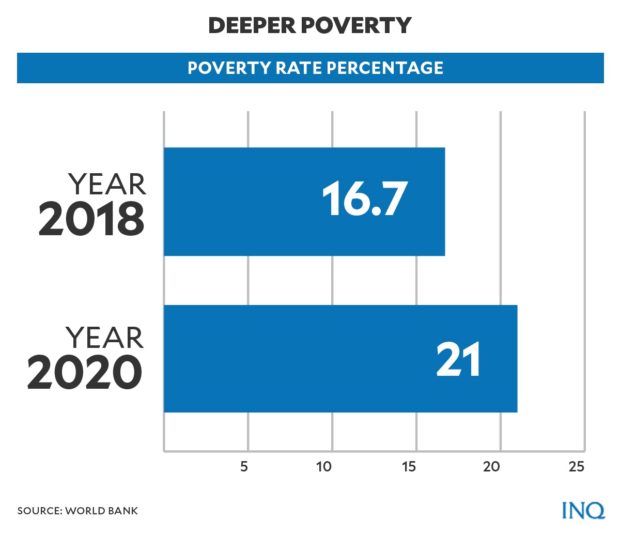 Worldwide, 703,000 individuals take their own lives every year. There have been 20 attempts for every death, the World Health Organization (WHO) said.

This has been the fourth leading cause of death among individuals aged 15 to 29 while 77 percent of the cases happened in low and middle-income nations in 2019.

Public health expert Jeff Corpuz (PhD), said in his work “COVID-19 and Suicide: When Crises Collide” that even in the midst of a crisis, “intentional self-harm” should still be a concern. 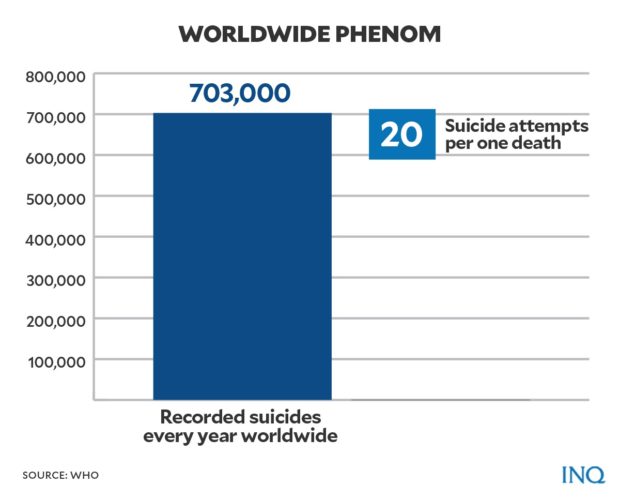 He said history offers a lot of lessons, explaining that there were deaths because of suicides in 1918 to 1919 as the Influenza epidemic ravaged the United States.

In Hong Kong, there were also elderly who committed suicide in the midst of the SARS crisis in 2003 which killed 55 percent of patients aged 60 and above.

The research work “Psychological Impact of the COVID-19 Pandemic in the Philippines” explained that the crisis “poses a threat to mental health.” 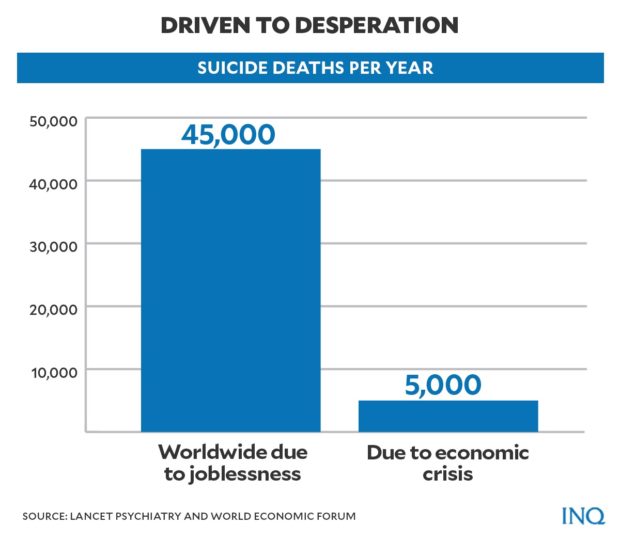 It revealed that out of the 1,879 completed responses made between March 28 and April 12 in 2020, 16.3 percent rated the psychological effect of the crisis as “moderate to severe.” 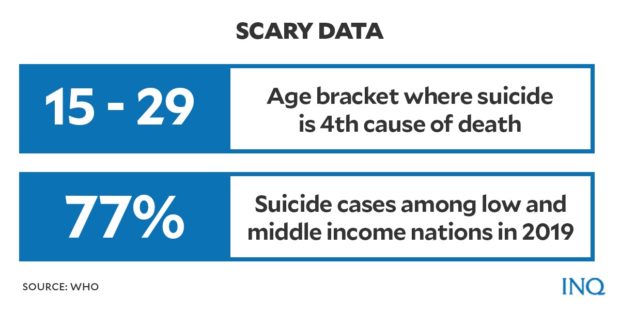 WHO explained that the link between suicides, mental illnesses—like depression—and excessive alcohol use was “well-established.” 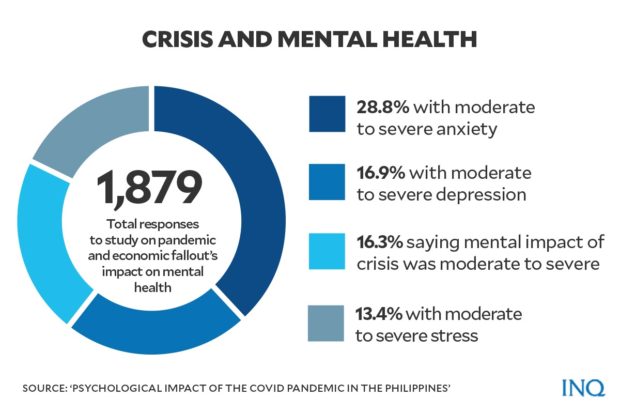 However, it said that cases of self-harm also emerge in times of crisis when people break down in dealing with crises in life—financial instability, end of relationships and illnesses.

Closer to home, the Philippines’ National Center for Mental Health (NCMH) reported an increase in what can be considered as SOS calls—from an average daily call volume of 400 in 2019 to 700 from March to August 2020.

READ: The other surge: Mental health hotlines getting busier

Signed in 2018, the law wanted to “develop and establish a comprehensive, integrated, effective, and efficient national mental health care system” in the Philippines.

Legarda said the COVID-19 crisis highlighted the need to “take care of our mental health to help us thrive despite the present challenges.”

She explained that as mental health has always been neglected, there should be a strict and effective implementation of the law to integrate measures to address mental health issues.

WHO said that only a few nations have made suicide prevention a health priority while only 38 nations have a national strategy to prevent intentional self-harm.

Raising community awareness and breaking down the stigma were important for countries to make progress in preventing suicides, WHO said.

The Cleveland Clinic, a leading institution on mental health, said that in many instances, intentional self-harm can be prevented, especially when one knows the “risk factors and warning signs.”

It explained that while people may not know why one would commit suicide, there are reasons that increase the risks of someone taking his own life, including losing hope.

The Foundation for Advancing Wellness, Instruction and Talents (AWIT) said these are the signs one may commit intentional self harm:

1. When one threatens to kill himself, saying that they wish to die.
2. When one behaves in ways that are life-threatening or dangerous.
3. When one attempts to set possessions in order and make contact with people they have not spoken with after a long time.

It said that if you have seen even one of these “warning signs” and you think the person may commit suicide, you should ask them directly. 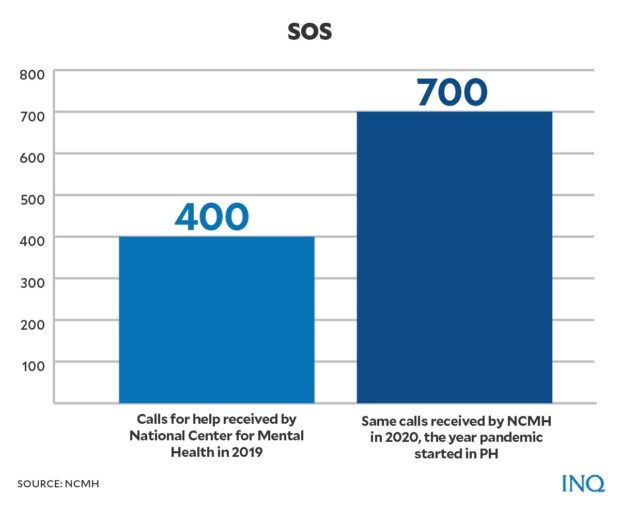 The Healthline.com listed these as possible help lines for those exhibiting signs of committing suicide:

1. Take them at their word: Dismissing their mention of suicide invalidates their distress and they may feel “reluctant” to share their thoughts and seek professional help.
2. Pay attention to their language and behavior: Listen and have a close look because they often talk about it in vague ways. Their actions also show some signs.
3. Ask them directly: You can have a better glimpse of one’s risk by asking about important things.
4. Encourage them to talk about it: It’s normal to feel scared and to think that you’re not certain of the best response to give, but shying away won’t help.
5. Offer compassion: When you’re talking to someone having intention to end his life, what you say matters.
6. Continue to offer support: When one feels better following distress, that doesn’t mean that they are completely fine. Stay in touch.
7. Encourage professional support: While you can’t force them to seek professional help, you can still encourage them.