Zambales fishermen still reluctant to go back to Scarborough Shoal 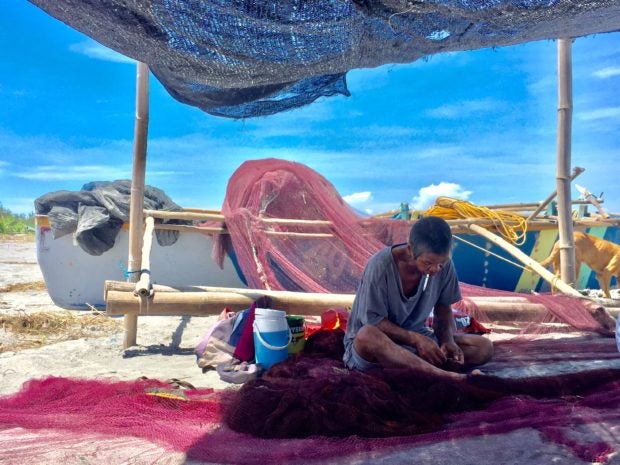 A fisherman in San Narciso town, Zambales province fixes his net as he prepares for a fishing trip within the municipal waters. Many local fishermen have stopped returning to Scarborough Shoal due to the continued presence of the Chinese Coast Guard. (Photo by Joanna Rose Aglibot)

SAN ANTONIO, Zambales — Despite the plan of the Armed Forces of the Philippines (AFP) to boost its presence in the West Philippine Sea, some fishermen in this province said they were still reluctant to go back to the contested Scarborough Shoal, their traditional fishing ground.

“The Filipino fishers can’t be blamed if they are hesitant about venturing into the West Philippine Sea. We are the ones experiencing harassment from the Chinese personnel operating in our traditional fishing grounds” Bobby Roldan, a fisherman from Masinloc town, told the Inquirer on Monday, October 25.

According to Roldan, who is also the vice chairman of the fishers’ group Pamalakaya in Luzon, the continued presence of Chinese vessels and militia in the Philippine waters still poses danger to them.

“They can’t expect us to just go out there and risk our lives and livelihood without assurance that we will not experience harassment and bullying from the Chinese aggressors,” he said

In a recent radio interview, Vice Admiral Ramil Roberto Enriquez, commander of the military’s Western Command, said units under his command were ready to secure new facilities in the West Philippines Sea, such as sheltered ports and cold storage facilities.

Locally known as Panatag or Bajo de Masinloc, the shoal serves as the traditional fishing ground of Filipino fishermen as it is situated inside the country’s 370-kilometer exclusive economic zone.

Almost all fishermen in this province have stopped fishing at the shoal since they experienced harassment from the Chinese coast guards and due to the depletion of the fish population.

China, which has sweeping claims in nearly all of the West Philippine Sea, seized control of the shoal in 2012, prompting the country to seek UN arbitration. In 2016, the arbitral tribunal invalidated China’s sweeping claims, but China continues to ignore the ruling. INQ