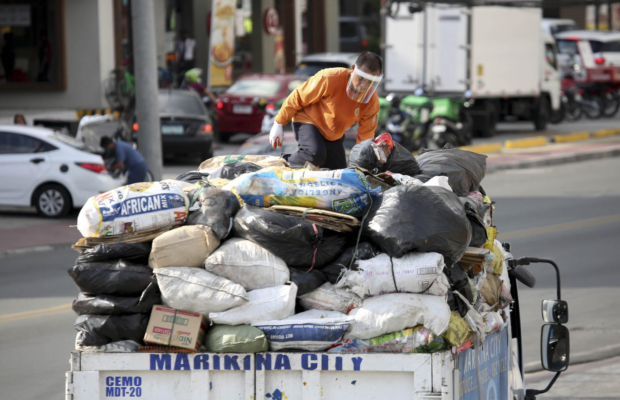 Materials for recycling are transported in Marikina City. FILE PHOTO

The report said while there are still Filipinos who find it difficult to reduce their carbon footprints because eco-friendly products are hard to find or expensive, there are those who witnessed a change in mindsets especially in becoming responsible consumers.

The Southeast Asia Trender Report of 2020 by online seller Zalora also made the same conclusions, saying that 61 percent of Filipinos were willing to buy products that had been made without destroying the environment.

The Philippines was next to Singapore with 63 percent of consumers preferring eco-friendly products. Malaysia had 56 percent and Indonesia had 55 percent. The Zalora report said that over the years, the threat of global warming paved the way for people to “live green”. 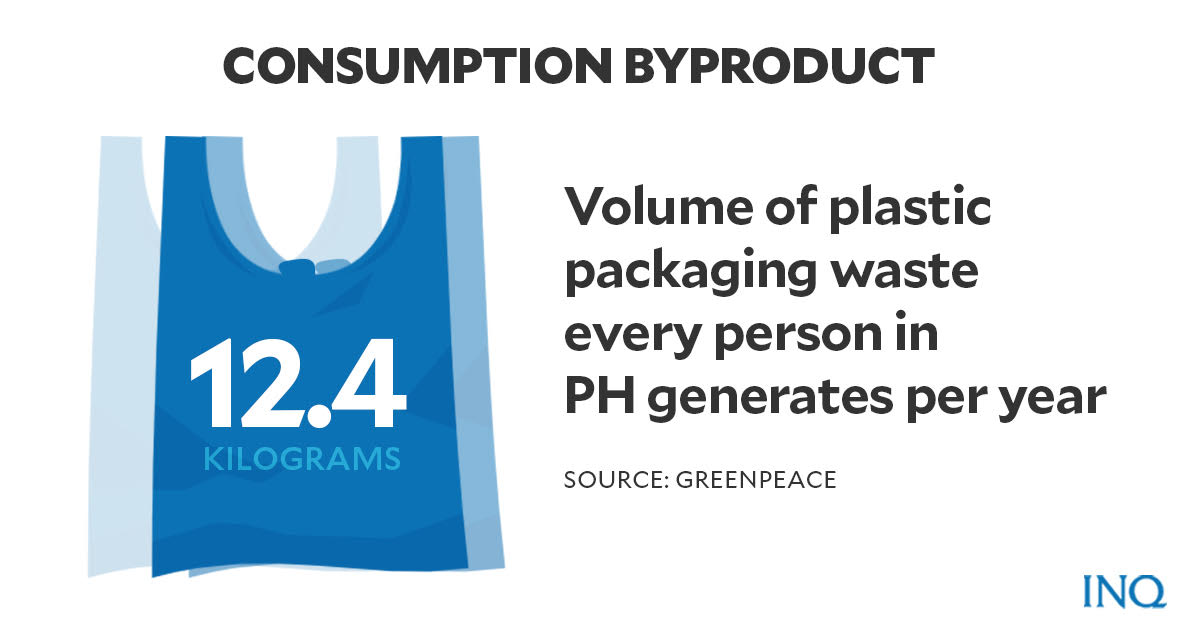 The World Business Council for Sustainable Development said that globally, 50 percent of consumers “tend to agree” to pay more for products that are ecologically-friendly while 25 percent said they “totally agree”.

However, as the e-commerce industry boomed, especially when COVID-19 lockdowns were imposed in 2020, products delivered on people’s doorsteps find themselves wrapped in plastic packaging.

Shopify Plus said globally, 72 percent of consumers wanted their orders “sustainably packed” because “today’s consumers want shipping to be not only fast and free, but also environmentally conscious”.

This was one of the reasons Youth Strike 4 Climate Philippines (YSCP), an environmental advocacy group led by young people, launched a petition to ask the two biggest online markets in the Philippines—Lazada and Shopee—to “integrate zero-waste systems into their businesses,” saying that there’s a need to initiate “sustainable practices”.

The campaign, which was backed by 14,625 Filipinos, asked Lazada and Shopee to reveal estimated data on their wastes, lessen the present waste production by introducing “reduction targets,” and redesign present systems.

Ecowaste Coalition told INQUIRER.net that the thousands who signed were proof of the popularity of the appeal to end the practice of needless plastic packaging waste, “especially now that more Filipinos become aware of the present plastic and climate crisis”.

“Global e-commerce sales are expected to double by 2022. If e-commerce giants continue to disregard calls to lessen their plastic packaging, this will only worsen the already alarming state of plastic crisis in the country,” the Ecowaste Coalition said.

The e-commerce industry in the Philippines is on a phenomenal rise. In 2020, it grew by as much as 55 percent, especially with the emergence of online shopping apps like Lazada and Shopee, said Greenpeace Philippines. 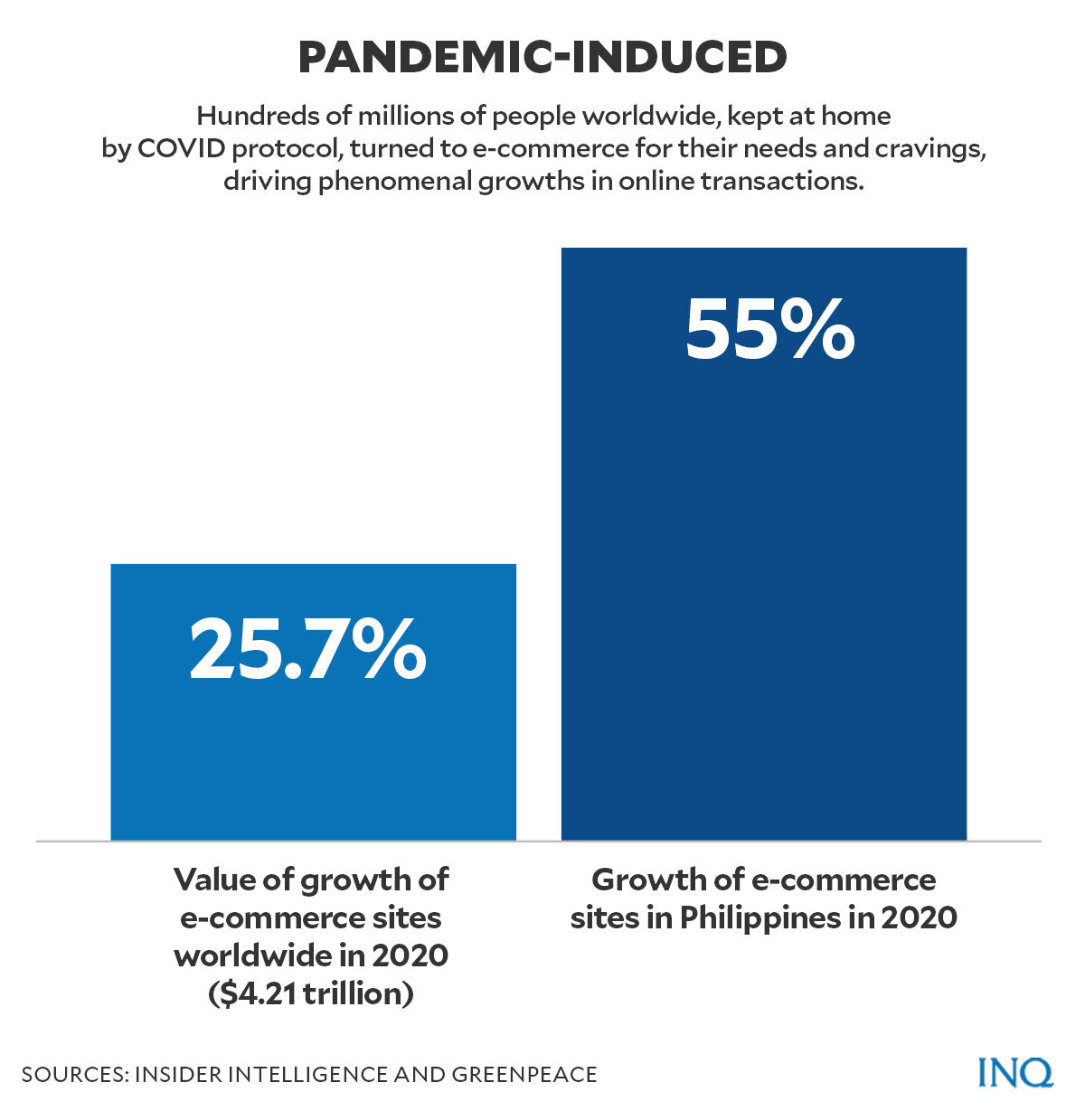 However, when packages reach their destinations, Greenpeace Philippines said problems with environmental impacts emerge because “it only takes 12 minutes for a plastic packaging to move from the hands to the bin.” 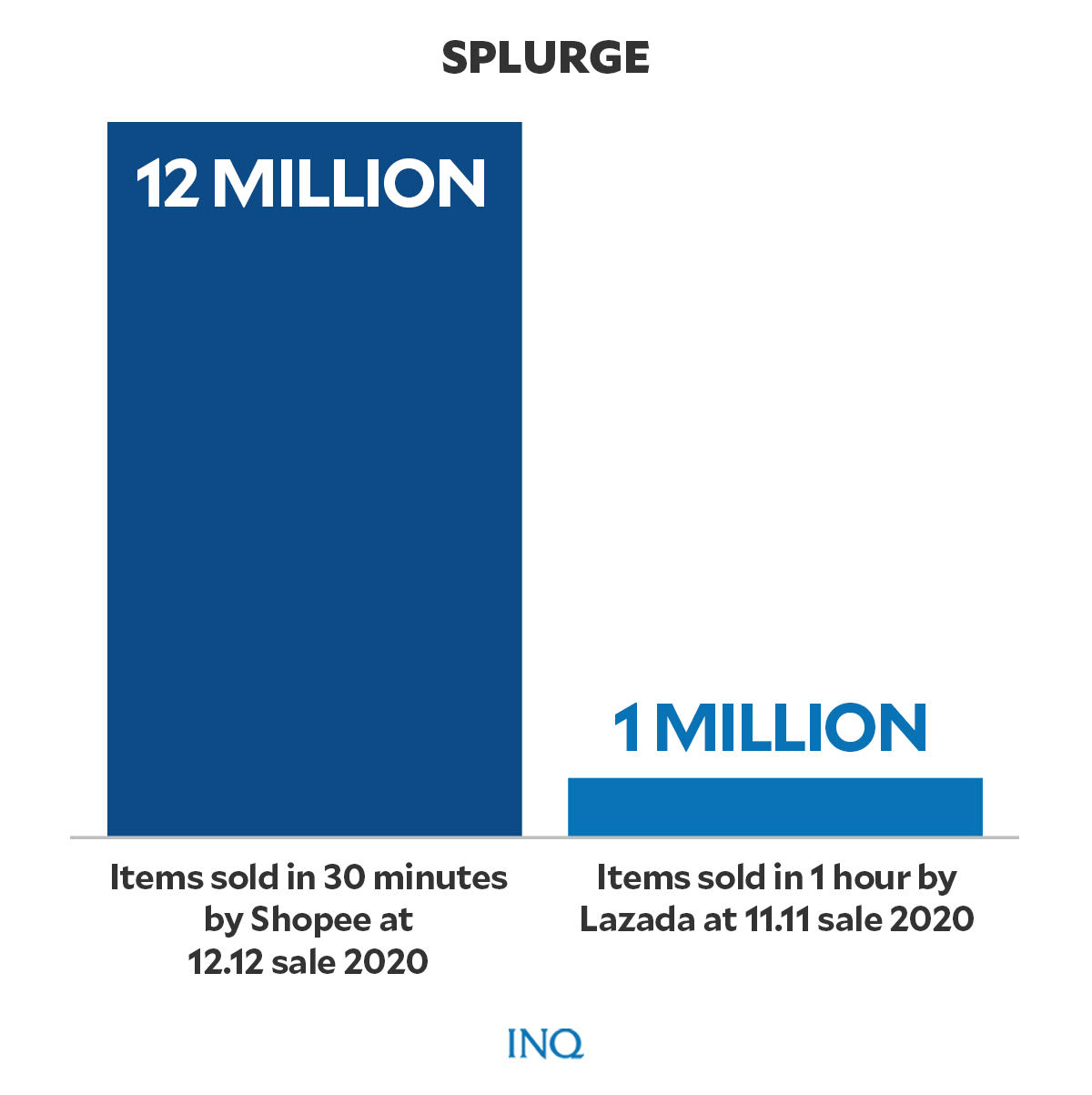 Jefferson Chua, the group’s campaign staffer, explained that the high sales “point to an astounding-and unsustainable–rise in plastic packaging,” saying that “yet, there’s no public data of exactly how much waste these companies produce.”

The YSCP and Greenpeace Philippines said that yearly, each Filipino contributes almost 12.4 kilos of packaging waste, most of which end up in landfills and left to decompose slowly.

The World Wide Fund for Nature (WWF) said plastic bags, which pose one of the greatest threats to wildlife, take 20 years to degrade, explaining that its pieces have devastating effects, especially on ocean wildlife.

Items often come with a bubble wrap which the Green Citizen said takes 10 to 1,000 years to decompose. “It is made up of low-density polyethylene film [and] 240,000 miles of bubble wrap are produced yearly,” it said.

The YSCP said that with COVID-19 lockdowns, the problem is “magnified,” saying that plastic packaging waste was estimated to increase by as high as 300 percent.

“Filipino taxpayers pay for the cost of managing e-commerce waste. These companies need to come clean, take responsibility, and do their part to ensure their businesses do not continue to create pollution,” Chua said.

In 2018, the World Bank revealed that in low-income nations, the costs of waste management comprise an average of 19 percent of a local government’s budget. 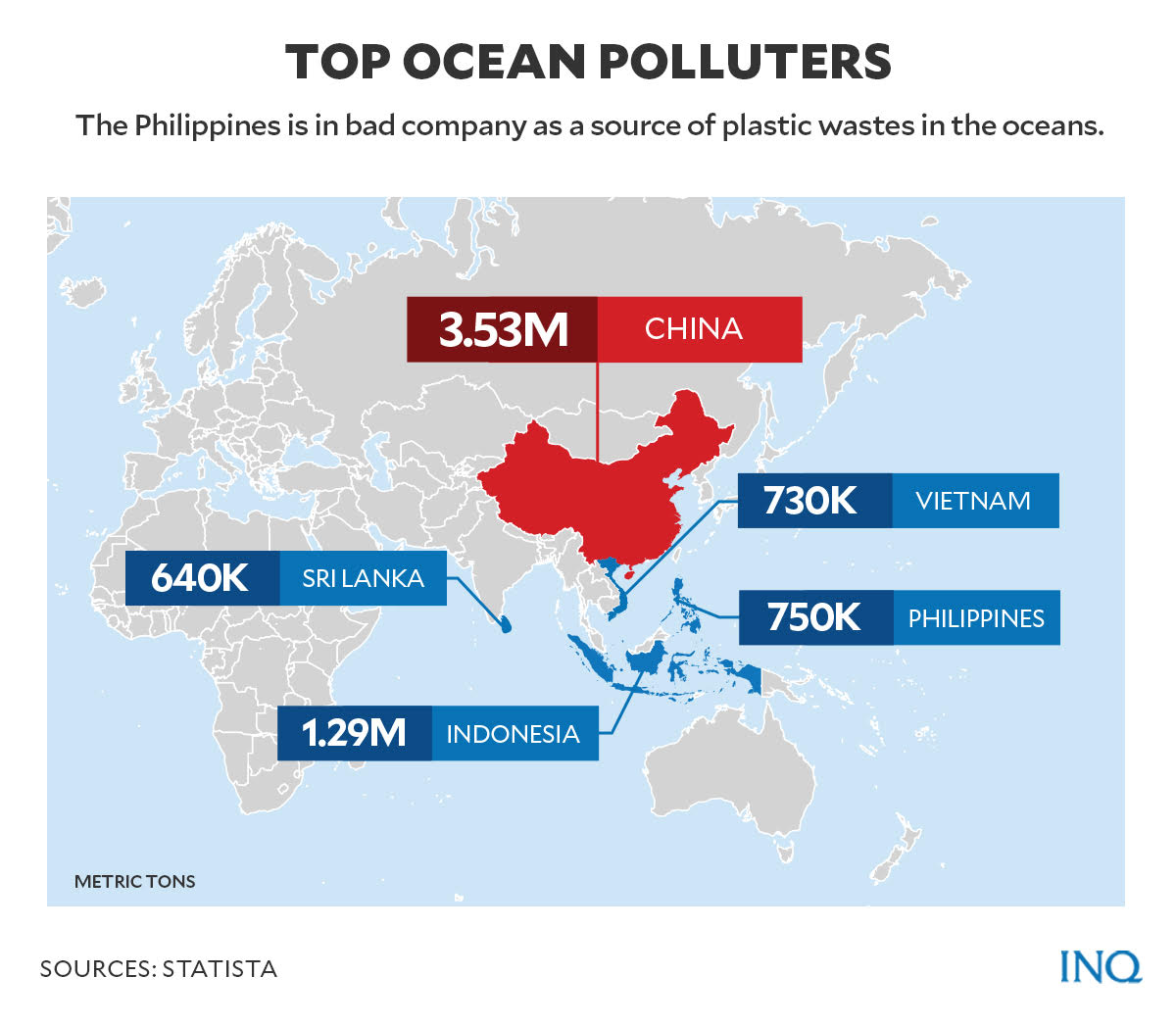 In the Philippines, 20 years since the Ecological Solid Waste Management Act was enacted into law, the Department of Environment and Natural Resources said there are only 108 landfills nationwide, or 10 percent of what was required – 1,700.

The Eco-Business previously cited Crispin Lao, head of the Philippine Alliance for Recycling and Materials Sustainability, as saying that 70 percent of Filipinos have no access to disposal facilities, including landfills. 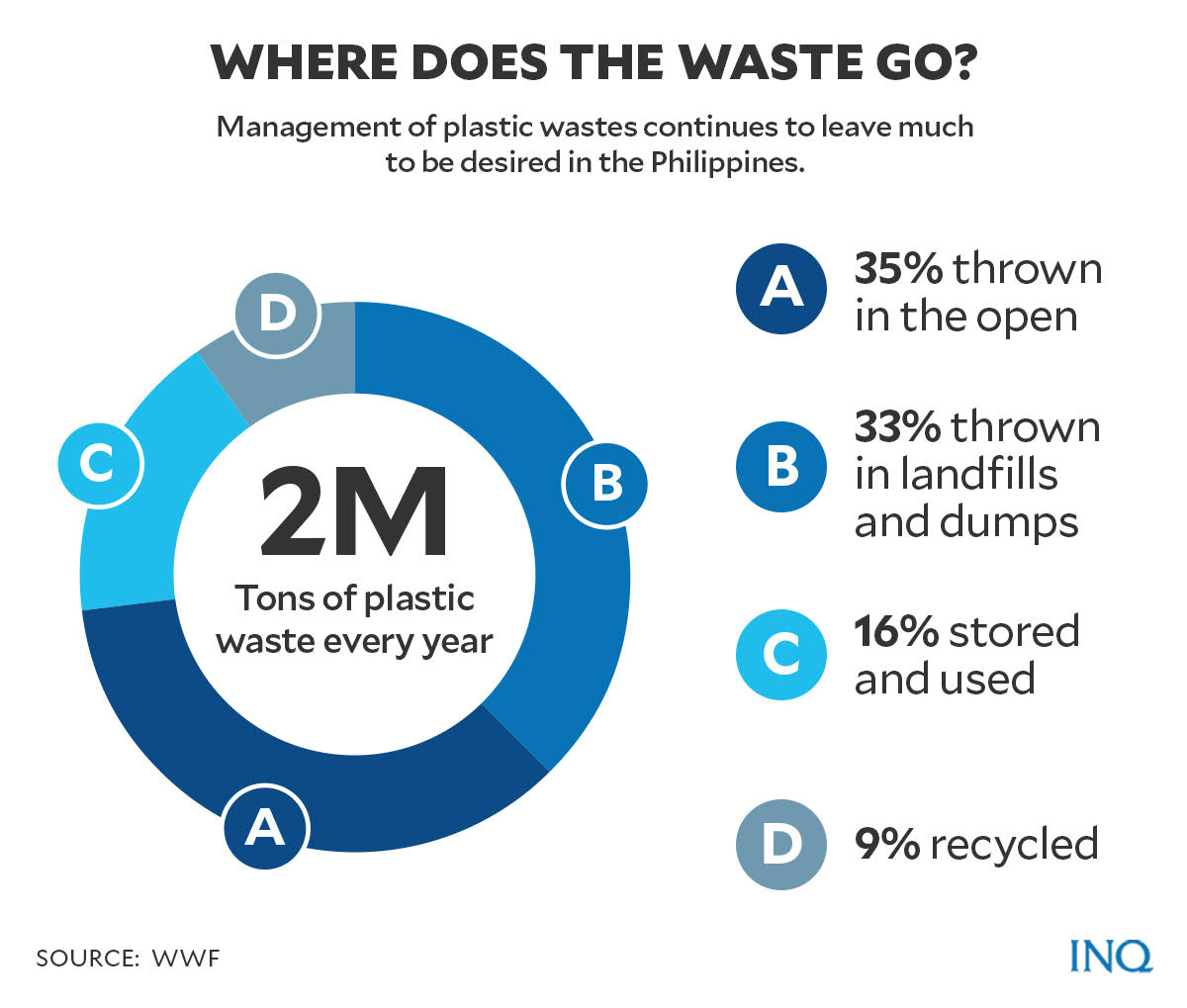 Chua explained, “As much as consumers are responsible for waste disposal, so too are corporations accountable for the plastic they end up producing, especially needless plastic packaging.”

“With every sale they hold, Lazada and Shopee rack up record profits while leaving Filipinos to shoulder cleanup for the tons of plastic packaging they caused,” he said.

Last Sept. 10, Greenpeace Philippines sent a letter to Lazada and Shopee to bring to them the appeal for “sustainable” business practices. This included a plea from a certain James, who signed the letter because “I care for my kids’ future.”

A month later, however, the group expressed dismay over the companies’ “continuous refusal” to start lessening their plastic packaging waste despite calls from Filipinos and small businesses.

It said neither of the two has so far responded to the issues raised – a public relations agency for Lazada only acknowledged the letter while Shopee “completely ignored”.

As the world marked Earth Day 2021, Lazada hosted a roundtable discussion and identified five tracks for sustainability, but the coalition said “we have yet to see these applied in the Philippines.”

Shopee, that time, likewise had a campaign backing eco-friendly brands, but “there haven’t been pronouncements on company-wide sustainability efforts.”

“All we are asking for is a commitment for these companies to start reducing the plastic they use by working with sellers to review their plastic usage and implementing a business policy to halt the use of inessential plastic packaging,” Chua said.

He asked, “How hard could that be?” saying that Lazada and Shopee should invest in sustainable solutions shown by several enterprises that cater to the needs of consumers, especially in the midst of lockdowns, without affecting the environment.

The Ecowaste Coalition said, “while we recognize the role e-commerce industries play during the pandemic, their lack of accountability and initiatives to be more sustainable is only worsening the plastic crisis.”

In an interview with INQUIRER.net, Chua said that while Greenpeace understands the need for Lazada and Shopee to deliver products “safely and damage-free,” the companies should listen to concerns on plastic packaging waste.

In its campaign, the YSCP listed the following things that businesses, including Lazada and Shopee, should do:

Greenpeace Philippines said it will continue to call for a dialogue with Shopee and Lazada to explore immediate actions to protect Filipinos from the rise of plastic pollution.