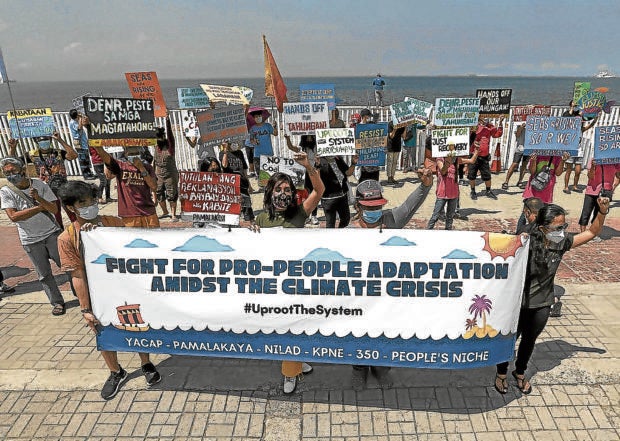 CLIMATE PROTEST Activists and fisherfolk stage a protest rally against the dolomite beach reclamation project in Manila. —RICHARD A. REYES

MANILA, Philippines — In a historic first, the United Nations (UN) Human Rights Council on Friday recognized that access to a safe and healthy environment is a fundamental human right and created the office of a special rapporteur on human rights in the context of climate change.

The 47-nation council passed Resolution 48/13 with no opposition, but China, India, Japan, and Russia abstained.

For Resolution 48/14 creating a new rapporteur, 42 states voted in favor, with only Russia opposing the resolution. China, Eritrea, India, and Japan abstained.

The Philippines voted yes to both resolutions, which are seen as monumental efforts to address and respond to the climate crisis, weeks ahead of the UN climate change conference in Glasgow, Scotland, in November.

UN High Commissioner for Human Rights Michelle Bachelet, who has long called for such a step, lauded the recognition of the Human Rights Council.

“Bold action is now required to ensure this resolution on the right to a healthy environment serves as a springboard to push for transformative economic, social, and environmental policies that will protect people and nature,” she said.

“This resolution brings hope in the context of widespread and increasing climate disasters, and is a milestone moment in the battle against environmental degradation,” said Ashfaq Khalfan, Amnesty International law and policy director.

Greenpeace Philippines said the recognition of a healthy environment as a fundamental right “vindicates” the struggles for environmental justice of Filipino communities and environmental defenders.

The group also said the creation of a special rapporteur comes at an opportune time, as the country awaits the resolution to the National Inquiry on Climate Change being undertaken by the Commission on Human Rights (CHR).

In September 2015, civil society organizations and private individuals filed a petition before the rights agency to investigate the responsibility of fossil fuel companies in producing greenhouse gases that cause climate change.

After a four-year investigation, the CHR said that the so-called “carbon majors” might be sued and held legally and morally responsible for human rights violations for causing climate change that devastated communities in the country. At present, however, its full decision has yet to be made public.

“We hope these resolutions serve as call to action not just for the Philippine government to protect the rights of its citizens, but also for other countries to act urgently on the climate crisis and ensure that businesses do not harm the environment and the rights of people,” Guerrero said. INQ

Read Next
Flood of support shocks Robredo
EDITORS' PICK
Smart offers wireless fiber-like speeds to Filipino homes with country’s first 5G Prepaid Home WiFi
Legarda: Ending Violence Against Women, a cause for all
This new condo in the South will make you want to turn a new leaf
National COVID-19 vaccination drive gets over 5.3 million people vaxxed so far
Pandemic prognosis: Where does it go from here?
Google won’t accept election ads for 2022 national polls
MOST READ
Bongbong Marcos to face another disqualification case
Christine Bersola, Julius Babao cleared of cancer after colonoscopy, endoscopy
A Merry Bongbong
Pandemic prognosis: Where does it go from here?
Don't miss out on the latest news and information.