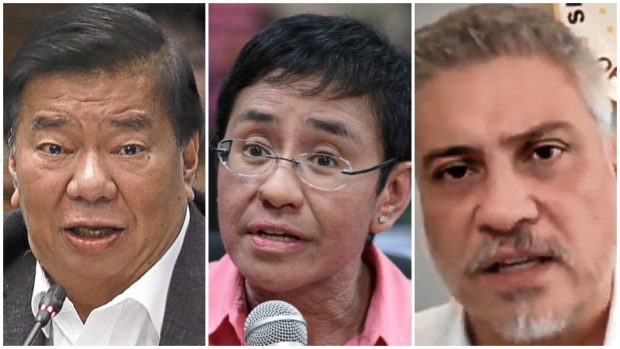 MANILA, Philippines — As Malacañang keeps silent on the country’s first Nobel Peace Laureate, the Senate, too, is divided on whether or not to give Rappler CEO Maria Ressa its highest honor—the Senate Medal of Excellence—the Inquirer learned on Sunday.

In messages to the Inquirer, Drilon insisted that Ressa, who was cited by the Norwegian Nobel Committee for her courage in standing up to the Duterte administration and its attacks on press freedom, should “automatically” be given the award once the Senate resumes its session on Nov. 8.

It’s “automatic per [the resolution]. Debates will also confirm my interpretation,” he said.

But Zubiri told the Inquirer that per Drilon’s own amendment to Senate Resolution No. 110, which created the Senate medal, the matter should be put to a vote and require unanimity among the members.

That could be a tall order considering the presence of President Duterte’s allies in the 24-member chamber.

Ressa is the Philippines’ first Nobel Prize winner but the recognition, far from bringing glory to the government, only shone a harsh light on its attacks on Filipino journalists and critical media organizations, including Rappler, which is facing multiple legal battles, and ABS-CBN, which was shut down for lack of a congressional franchise in May 2020.

“It does place the Duterte administration in a very awkward situation considering how it has repeatedly attacked Rappler and filed all sorts of bogus cases against her,” Sen. Francis Pangilinan said.

But the Senate apparently is also ambivalent about Ressa’s Nobel win.

While saying he believes any Filipino Nobel winner deserves the Senate’s recognition, Zubiri invoked the “approved rules” for the conferment of the award.

“We can take this up when we get back in November. [The conferment on Nobel winners] should have been automatic; however, there is a Drilon amendment that states it’s upon the unanimous vote of all members, so if nobody objects then it is automatic. That’s in the approved rules,” he said.

But Drilon cited the wording of the resolution, which clearly states that the Senate medal shall be “conferred upon Filipinos who are awarded the Nobel Prize, Pulitzer Prize, the A.M. Turing Award, the Ramon Magsaysay Award, or an Olympic medal.”

An Aug. 24 press release of the Senate also said the measure “automatically confers” the Senate medal on Filipino recipients of the Nobel, Pulitzer, Turing and Magsaysay award, or an Olympic medal.

Senate President Vicente Sotto III, who agreed with Zubiri’s interpretation, said a Senate medal for Ressa would not sail smoothly.

“Then it will have difficulty because based on our agreed rule, there must be unanimity before any conferment of the Senate medal of excellence,” he told the Inquirer in a Viber message.

In her weekly radio show, Robredo said Ressa’s “much deserved” win symbolized the importance of press freedom and freedom of expression, especially amid the deteriorating media landscape here. INQ