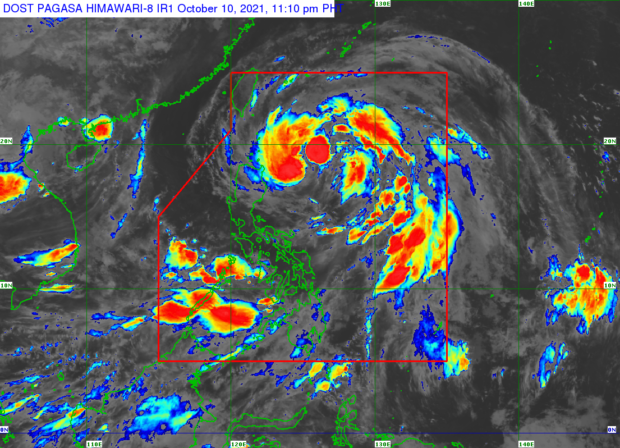 The cyclone, which merged with the remnants of Tropical Depression Nando on Sunday, is expected to further intensify into a severe tropical storm before making a close pass or possible landfall in the Babuyan Islands between Monday afternoon and early Tuesday, the Philippine Atmospheric, Geophysical and Astronomical Services Administration (Pagasa) said.

At a press briefing on Sunday afternoon, Pagasa weather specialist Ariel Rojas said that Maring had widespread clouds and wind circulation, but was expected to contract as it gains strength and moves over the Philippine Sea.

As of 4 p.m., its center was 645 kilometers east of Tuguegarao City in Cagayan province. It blew winds of up to 85 kilometers per hour near the center, and gusts of up to 105 kph.

Maring continued to move west-northwestward at a speed of 20 kph.

In the Visayas, the same cyclone warning is up in Eastern Samar and the eastern portions of Northern Samar and Samar.

Maring may also enhance the southwesterlies, bringing rain in the Visayas, Zamboanga Peninsula, and the provinces of Palawan and Occidental Mindoro at the start of the week.

Pagasa is still not ruling out the possibility of the storm hitting the northern tip of mainland Luzon.

Maring is expected to exit the Philippine territory on Tuesday. INQ