MANILA, Philippines — The past few months have been extra frustrating for Marko Yambao, who, under normal circumstances, consciously keeps his carbon footprint low and his activities environment-friendly.

With the community quarantine due to the coronavirus disease (COVID-19) compelling him and millions of other Filipinos to stay home, the 27-year-old content producer found himself relying on online shopping and deliveries for his needs. This, however, came with the deluge of single-use plastics which he had long sought to avoid.

“Online deliveries overdo their packaging all the time,” he lamented. “There’s just so many layers of plastic: three layers, at the very least. Even unboxing a package can get tiring.”

Yambao is not alone. As lockdown measures continue to limit movement and access to goods and services, consumers have turned to deliveries for both essential and nonessential purchases. And even as restrictions begin to ease, disposable plastics appear poised to dominate life under the shadow of the coronavirus.

To think that not too long ago, the Philippines was making some headway in the arduous shift from single-use plastics. The clamor for swift action was warranted: According to a 2015 report by the international group Ocean Conservancy, the country generates 2.7 million metric tons of plastic garbage yearly, and is the world’s third biggest marine plastic polluter.

Some policy actions to cut back on the use of plastics — from proposed legislation to actual ordinances — had been laid on the table. But COVID-19 effectively turned the tide, forcing the battle against plastic pollution off the front burner.

“The pandemic has definitely caused a lot of disruptions in our progress moving away from plastics,” said Marian Ledesma, Greenpeace Philippines zero waste and sustainable food campaigner. “The increase of deliveries for food and online shopping introduced another way for society to produce waste. Cities and provinces coming out with ordinances against plastic use had to backtrack.” 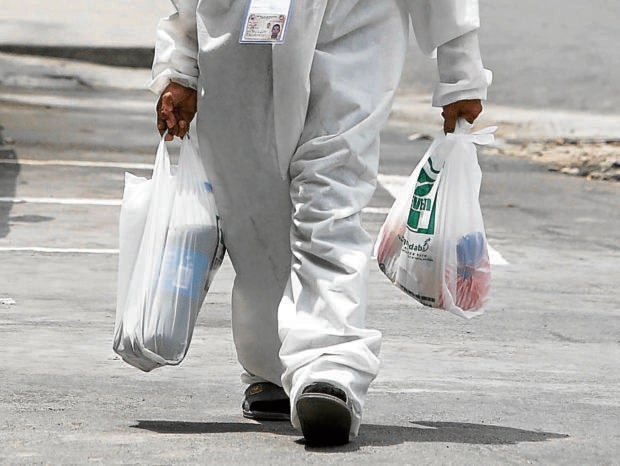 BAGGED The community quarantine prompted by the coronavirus pandemic has seen an increase in the use of plastic packaging for food items and other goods delivered via courier. Plastic materials are also used to make protective clothing for medical front-liners. —MARIANNE BERMUDEZ

Pre-pandemic, the Philippines had already been contending with overwhelming plastic waste. A five-year trash audit by the Global Alliance for Incinerator Alternatives revealed in 2019 that Filipinos were throwing away 48 million plastic shopping bags, 45 million thin-film bags and 163 million plastic sachets every day.

While numbers are still to be validated, overall waste generation during the lockdown is seen to have dropped because of the massive slowdown of economic activity, said Crispian Lao, vice chair of the National Solid Waste Management Commission.

Still, with the majority restricted to their homes, household waste is expected to balloon even if people are not ordering takeaways and deliveries daily, Lao said.

According to the commission’s solid waste status report in 2014, the biggest chunk of municipal solid wastes comes from households (56.7 percent), followed by commercial sources, such as general merchandise stores and restaurants.

Beyond takeouts and deliveries, plastic has surfaced as a go-to material for the safety of the general public.

In hospitals and healthcare facilities, front-line medical workers are clad in personal protective equipment often made of plastic. The use of disposable masks and gloves has exploded exponentially even among ordinary citizens, causing shortages.

As the economy reawakens, plastic has also become commonplace in certain vital areas. Separators made of plastic sheets are now installed in supermarkets, pharmacies and similar establishments. Some public utility vehicles have also been retrofitted to include these.

While the use of plastic in the context of public health cannot be avoided, the challenge lies in managing the discards and ensuring that these do not end up in the streets, waterways and oceans.

“The difficult thing is if it is infectious medical waste, it is very hard to say that we are going to replace them with reusables, because right now, there is no way we can compromise the health of the people in need of these tools,” said Anna Oposa, cofounder of the marine conservation group Save Philippine Seas.

“But there is also waste that we have more control over, such as e-commerce packaging,” Oposa said.

Another setback stemming from the pandemic is the freeze in measures geared to minimize plastic waste.

For example, Quezon City implemented its ordinance banning plastic bags in January but has since decided to step back.

“In the interest of health and safety, the use of plastic bags was temporarily allowed … to lessen the risk of virus transmission and protect both the front-liners and the buying public,” said Andrea Villaroman, head of Quezon City’s environmental protection and waste management department.

In a memorandum issued in May, the city government encouraged residents to reuse plastic bags as lining for their garbage bin instead of immediately disposing of them. It also encouraged food establishments to adopt a “by-request” protocol for single-use cutlery and condiment sachets for takeaway food and deliveries.

Due to the virus, the department is also mulling the deferment of the ban on single-use plastic/disposable material, which was scheduled for implementation in July.

“As gathered from businesses themselves, full compliance with the [ordinance] would require proper transition and adjustment through procurement of reusable dining materials and washing and disinfection equipment,” Villaroman said, adding:

“The city government recognizes that the pandemic caused significant financial loss for businesses and that requiring full compliance with the ordinance by July 2020 would be untimely.”

Even and especially as COVID-19 continues to rage, environmentalists urge the government, private businesses and ordinary consumers to still keep their eyes on the plastic waste problem.

“As we are transitioning to this new normal, governments and businesses should proceed according to science,” Ledesma said. “And what science tells us is good practices in hygiene and sanitation are still the key actions to protect public health.”

At the House of Representatives, the proposed “Better Normal for the Workplace, Communities and Public Spaces Act of 2020” seeks the strict monitoring of the implementation of Republic Act No. 9003, or the Ecological Solid Waste Management Act of 2000, in relation to the proper disposal and management of waste relating to the “new normal.”

House Bill No. 6864, recommended to substitute for the earlier “New Normal” bill, proposes that the government regulate the manufacture, importation, use and recycling of single-use plastics; conduct research on and develop alternatives to single-use plastic packaging; and provide incentives to plastic industries that will shift to other manufacturing activities.

“The use of plastics right now may be solving another [problem], but we need to really recognize that this will create a longer problem in the future,” said Dr. Deo Florence Onda, marine scientist at the University of the Philippines’ Marine Science Institute and founding member of Plastics Research Network Philippines.

Environmentalists say that with the Philippines still adjusting to the new reality, ordinary citizens should consciously reduce their plastic use, reusing what they consume and recycling what they can.

Reusables, such as cloth bags and personal water tumblers, should still be part of people’s lives moving forward.

“Bringing your own is better because you know where that came from,” Oposa said. “If you bring your own, you know that it was touched by your own hands.”

Ledesma said businesses should also rethink and offer alternative delivery systems and allow customers to have a say in their purchases.

“With online shopping and delivery now the norm, it’s made the excessive amount of plastic sort of an acceptable price to pay for our convenience,” she said. “Deliveries make purchases and ordering so easy that it sort of feeds into needless consumption. It can create bad habits that eventually become lifestyles.”

And Yambao? He has realized that getting back to his old practices won’t happen anytime soon.

But at the very least, he’ll reach out to the online shops to hold back on that added layer of plastic, he said.

Read Next
Lockdown blamed for cases of violence against women
EDITORS' PICK
New Year, New Rediscoveries
Is your company a growth champion? Stand up and be recognized!
Pope Francis to miss events due to new flare up of leg pain—Vatican
PNP’s Covid-19 cases jump to 9,809; 52 new infections logged
Acer Philippines welcomes you to its first flagship store
More than 150 National Guard in Washington for Biden inauguration test positive for coronavirus
MOST READ
WATCH: Alex Gonzaga joined by family in Amanpulo honeymoon
Wife stabs husband after seeing her younger self in old photos, thought he was cheating
Eyes on Bontoc town as more UK variant cases emerge
Lawyer wants AFP to apologize for including him in NPA list
Don't miss out on the latest news and information.