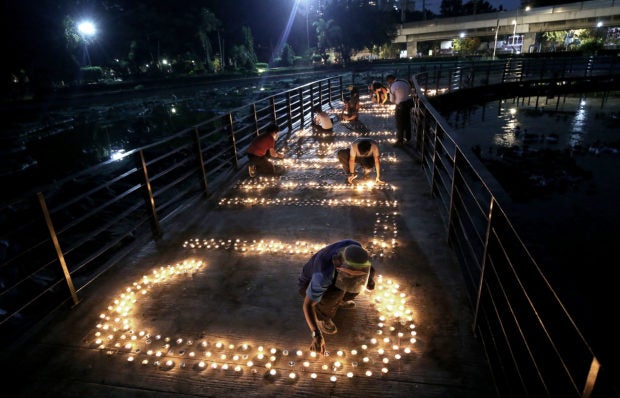 REMEMBER ‘ONDOY’ Greenpeace members light candles forming the words “climate justice” on the promenade over the relief map of the Philippines at Rizal Park in Manila to mark the 11th anniversary of Tropical Storm “Ondoy,’’ which left a swath of devastation across Metro Manila on Sept. 26,2009. —RICHARD A. REYES

MANILA, Philippines — Environmental group Greenpeace Philippines has urged President Rodrigo Duterte anew to declare a “climate emergency” as a policy instrument to help the Philippines achieve its goals under the Paris Agreement after his call on other countries in the United Nations General Assembly to honor their commitments to fight the climate crisis.

Greenpeace made the appeal after its Southeast Asia umbrella organization released a report last week that none of the eight countries in Southeast Asia were meeting the global targets set to help prevent the planet’s temperature from rising by more than 1.5 degrees Celsius “without significant market and regulatory changes.”

The report evaluated the Philippines, Vietnam, Malaysia, Thailand, Laos, Cambodia, Myanmar and Indonesia based on their commitments to energy transition, existence of renewable energy policies, and whether green energy is part of their COVID-19 recovery plan.

The countries are all signatories to the Paris Agreement, which acknowledges the imperative to keep global temperature from rising by 1.5 Celsius degrees.

“While some of the countries have stronger frameworks in place currently, each has a long way to go to obtain a ‘passing’ grade in this scorecard,” the report said. “Despite this, each country also has the opportunity to increase ambition to get on a 1.5 degrees pathway, most by 2030.”

In a statement, Greenpeace country director Lea Guerrero urged the President to issue an executive order “to put climate action at the center of all policy decision-making from local to national level.” She said this would ensure the Philippines’ “rapid and just transition to a low-carbon pathway through the phaseout of coal and fossil fuel investments.”

“Aside from calling in countries to enhance their commitments to the Paris Agreement, the declaration must also be a call for climate justice and hold big polluters—fossil fuel and cement companies—accountable for their role in driving climate change, which has placed millions of Filipinos in vulnerable situations with loss of lives, homes and livelihoods,” Guerrero said.

Declaring a climate emergency, she said, would “enable a recovery that will transform our economy and society to tackle the climate crisis and promote positive environmental and health outcomes. Doing so will help build resilience against future shocks, and ensure a society that puts the well-being of people and nature first.”

This was not the first time Greenpeace called on Duterte to declare such a status in the country. In 2019, at the height of the global climate strikes, the group wrote an open letter asking for the presidential action, especially as Filipinos are consistently identified among the “most impacted globally by this crisis.”

In their “Southeast Asia Power Sector Scorecard” report released last week, the environmental group said the Philippines, while being an early leader on renewable energy, still got a “D+ … due its strong inclination to coal power.”

Vietnam got the highest grade — a C — while the others got a D; Indonesia got an F for its “addiction to coal.”

Greenpeace was most optimistic that the Philippines, Thailand and Malaysia could follow Vietnam’s lead immediately.

It recommended that the Philippines immediately lay down exclusion policies for new coal and gas power starting from 2020, and to improve grid development for solar and wind.

“Solar and wind development has been abysmal for the amount of time since the introduction of the [2008 renewable energy law]. Coal remains dominant in the country’s power sector expansion. The increasing reliance on importation of fossil fuels has exposed vulnerabilities of the Philippines’ addiction to coal power generation, leaving the country locked into long-term import contracts for fossil fuels,” the report said.

The country’s poor renewable energy performance is partly due to the private sector, instead of the state, driving most of energy investments, it added.

Greenpeace noted that the Philippine government’s “new normal” COVID-19 framework likewise made no mention of solar or wind in its economic stimulus.

Should the Philippines continue, coal would go over 60 percent of its energy mix by 2030, with solar and wind comprising only a measly 5 percent.

Still, it was possible for the country to achieve 50 percent renewable energy by (mostly solar) 2030 so long as coal power remains flat in the 2020s, the report projects.

Malaysia, meanwhile, has the “highest technical capability of becoming the region’s renewable energy champion, given its position as a global solar manufacturing hub and adequate grid development.”

Greenpeace urged all the countries to revisit their targets, especially post-COVID-19, “to lead the region toward a green and just recovery so that each country can emerge with stronger, more distributed, and more resilient energy systems.”

“Our scorecard and modeling of 2030 show that while parts of the region could be a global leader in the next 10 years, many problems are evident, such as Indonesia’s addiction to coal power and the misconception and mislabeling of gas as a transition fuel in several countries,” the report said.