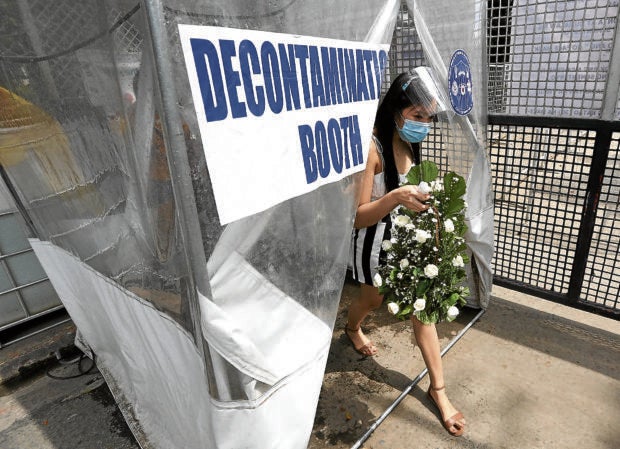 EARLY VISIT A woman walks through a decontamination booth as she enters the Manila North Cemetery on Sunday, amid the government’s call for Filipinos to visit their dead before the traditional All Saints’ Day and All Souls’ Day observance to avoid wider transmission of the new coronavirus. —MARIANNE BERMUDEZ

MANILA, Philippines — The medical team of a private sector effort for mass testing for the new coronavirus on Sunday defended the use of rapid antibody tests, which the medical community said could have been partly responsible for the surge in infections.

“We take serious exception to statements blaming the surge in cases on the businessmen opening up using rapid antibody tests,” Dr. Minguita Padilla, head of the medical team of Project Ark, the private sector campaign for testing, said in a statement.

Former Health Secretary Esperanza Cabral, also a member of the Project Ark medical team, said all tests were imperfect and had appropriate and inappropriate uses.

“But I take exception to the allegation that a test, when used appropriately, can cause increased transmission of any disease. The decision to use a test should be made in context,” Cabral said in a separate statement.

The rapid antibody test controversy resurfaced as the overall number of COVID-19 cases in the country passed 300,000 during the weekend.

On Sunday, the Department of Health (DOH) reported 2,995 additional infections, bringing the national total to 304,226 cases.

The DOH announced 19,630 recoveries—including mild and asymptomatic patients it considers recovered after 14 days in isolation—pushing the total number of COVID-19 survivors to 252,510.

That left the country with 46,372 active cases, 86 percent of which were mild, 8.8 percent asymptomatic, 1.6 percent severe, and 3.7 percent critical.

The DOH also disapproves of the rapid antibody test, saying it does not look for the coronavirus and that the “gold standard” is the reverse transcription-polymerase chain reaction (RT-PCR) test.

Padilla urged Project Ark’s critics “to concentrate our efforts on fighting one enemy—COVID-19—and not each other.”

“It’s bad enough that some people are bent on engaging in a blame game that tends to divide rather than unite [the public] in this major battle. It makes matters worse when the accusations are based on falsehoods that even try to demonize groups that have been doing so much to keep the country’s economy from falling over the precipice,” she said.

Padilla said she agreed with the assessment of Dr. Rontgene Solante, an infectious disease expert, that among the reasons the country was unable to contain the spread of the virus was the authorities’ losing the best and earliest opportunity to find the carriers before they could turn into severe cases or infect others when the majority of the population was under lockdown.

Solante, too, defended antibody testing, saying the claim that it was responsible for the surge was totally unfounded.

“The business community had to make the decision of the most available and affordable test during that time, and the Project Ark protocols were sound,” Solante said.

Padilla said the rapid antibody test was never used as a stand-alone test, but in addition to symptomatology and to all the safety measures recommended by both the DOH and the Department of Labor and Employment.

“The tests are an added weapon to identify those who may be infected even if asymptomatic, so that they might be isolated,” she said. These were also used to aid contact tracing, she said.

“Given the scarcity of RT-PCR capability, we in Project Ark tried to do that using the only thing available then for asymptomatic [people], which was the antibody [test]. And [this], used properly, helped identify infections in the community prior to the planned gradual opening of the economy,” Padilla said.

Padilla said the main criticism against rapid antibody testing were false positive results because the tests were only 96 percent specific and might be positive in people without COVID-19 in a certain percentage.

“But this was better than not finding any asymptomatic spreaders at all, and allowing them to remain in the households continuously infecting others,” she said.

Citing published studies, Padilla said even the RT-PCR test could, at best, find infections only around 80 percent of the time and this was on the third day of symptoms, or the eighth day of exposure on the average.

“Its sensitivity goes down continuously after this,” she said. “But if one combines the PCR with other tests, such as antibody tests, then the chances of finding the infection increases because you would be able to find it in earlier stages through the PCR and also in the second week onward when the virus might not be found anymore but the antibodies are highest.”

While there are more RT-PCR testing centers now, the test remains priced beyond the reach of most Filipinos, Padilla said.

“This is something Project Ark also has tried to help out in through donating RT-PCR laboratory facilities around the country and also by spearheading pooled testing among asymptomatics. All of these testing the business groups did, and continue to do, without using any government funding,” she said.

According to her, it has always been the stand of Project Ark and the business community to use whatever tests are available, strategically and appropriately.