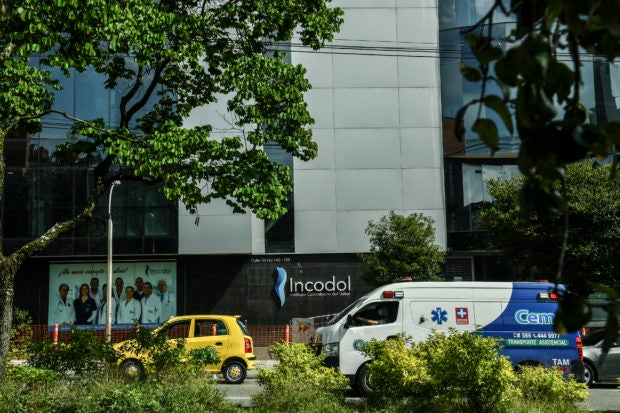 An ambulance is seen outside the Colombian Institute for Pain clinic (INCODOL), in Medellin, Colombia, on October 10, 2021. AFP

BOGOTA — The last-minute cancellation of a Colombian woman’s euthanasia sparked controversy and a lawsuit Monday in the only Latin American country where the life-ending practice is allowed.

Martha Sepulveda, who suffers from amyotrophic lateral sclerosis, the incurable degenerative disease ALS, had been due to die Sunday by euthanasia, but health officials suddenly halted the 51-year-old’s procedure citing her improving health.

Even though ALS progressively paralyzes the body to the point of death, the process can take many years and Sepulveda had not been deemed to be terminally ill.

That made her the country’s first person not expected to die imminently to be granted the right to have their life terminated.

“I may be a coward, but I don’t want to suffer anymore, I’m tired,” Sepulveda had explained a few days earlier in an interview with local Caracol TV.

“I have been very peaceful in my mind since I received the authorization for euthanasia. I laugh, I sleep better,” said the practicing Catholic, whose legs have been paralyzed by the disease.

“God doesn’t want me to suffer like this,” she said.

“Mom is going to die Sunday morning and she is happy,” her son said in the same interview, alongside his smiling mother.

But the procedure, scheduled for Sunday in a hospital in Medellin, was canceled Friday by health authorities.

The medical commission that had authorized the procedure “unanimously” reversed its decision after noting Sepulveda’s “better state of health than initially reported by the patient and her family,” her relatives said in a statement.

“We do not know why they evaluated in August with certain criteria and in October with others,” Sepulveda’s lawyer Camila Jaramillo protested on Monday.

She announced a lawsuit for “cruel and degrading treatment” and for the violation of her client’s right to die with dignity.

“Although this situation brings my mother back to her previous state of despair and sadness… we are ready to fight for her dignity,” her son Federico Redondo told reporters.

Euthanasia has been legal since 1997 in majority-Catholic Colombia and is strictly regulated. Since then, 157 people have resorted to the procedure, according to official figures.

The Constitutional Court ruled in July to extend access to euthanasia to victims of “intense physical or psychological suffering resulting from bodily harm or a serious and incurable disease,” but not necessarily a fatal one.

Asked by AFP, the Ministry of Health justified the Sepulveda decision by explaining that “the Constitutional Court has not yet notified the judgment to the ministry.”

Elsewhere in Latin America, Mexico has a law that allows patients or their families to request that life not be prolonged by artificial means, while Uruguay’s parliament is debating a euthanasia bill.

Read Next
North Korea’s Kim says US is ‘root cause’ of tensions
EDITORS' PICK
Only 4,393 new COVID cases logged due to low number of tests
USAID Opportunity 2.0 calls for applicants for grants for out-of-school youth engagement
DOTr to defend proposal to increase passenger capacity in public transport
Hong Kong to further tighten COVID-19 travel restrictions
Legarda emphasizes role of ICC/IPs in nation building this IP month
Work-From-Home is here to stay and requires reliable logistics
MOST READ
Bongbong says PH should modernize infrastructure to become Asia’s next logistics hub
PDP-Laban’s Cusi wing inks coalition deal with Reform Party
Senate panel approves Filipino citizenship of Elizabeth Zobel de Ayala
Martires asks why he is being singled out over issues on releasing SALNs
Don't miss out on the latest news and information.