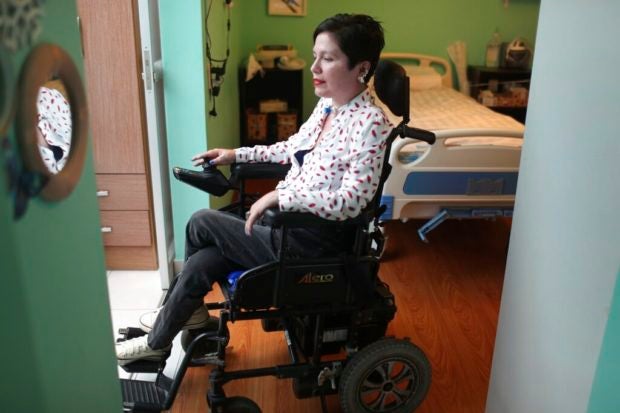 Ana Estrada, a 42-year-old Peruvian psychologist who is almost completely paralyzed by a terminal illness and yearns to be legally allowed to end her own life, rides her motorized wheelchair through her home in Lima, Peru. (AP)

LIMA, Peru  — A Peruvian woman who is almost completely paralyzed and requires round-the-clock care for a terminal illness took her fight to change the South American nation’s law forbidding euthanasia to the country’s courts Friday.

The public defender’s office joined Ana Estrada in filing a lawsuit urging the Ministry of Health and other state institutions not to enforce a law punishing those who help terminal patients end their lives. The law carries penalties of up to three years in jail.

The 43-year-old woman with polymyositis, a disease that wastes away muscles and has no cure, is also asking Peru’s government to establish new regulations allowing patients like her the right to choose how and when to die.

“This is about life,” said Estrada, who spoke to journalists through a live video feed transmitted from her sick bed announcing the suit.

Estrada first began experiencing the side effects of her illness at age 12. By 20, she was too weak to walk and started using a wheelchair. Even so, she graduated from university with a psychology degree and worked as a therapist.

She continued to build her life, saving money, buying an apartment, having a relationship and taking care of a pet cat. But in 2015 her condition deteriorated, she got pneumonia and spent a year in a hospital intensive care unit.

Estrada now relies on a feeding tube in her belly and another tube inserted into her windpipe to help her breathe.

“My privacy, my autonomy, my independence — I lost it,” she said.

The public defender’s office said Estrada’s case is the first in Peru asking the government to recognize a patient’s right to “death in dignified conditions.”

“This isn’t a defense for death,” said Walter Gutiérrez, the public defender. “This is a plea for life, to live it with dignity.”

Among those countries to have legalized euthanasia or medically assisted suicide are Belgium, Canada, Colombia, Luxembourg, the Netherlands, and Switzerland.

In the U.S., eight states and the District of Columbia have legalized medically assisted suicide. In addition, Montana doesn’t have a specific law on the books but a state Supreme Court ruling has allowed such deaths to proceed.

Dr. Gonzalo Gianella, a specialist in respiratory diseases who has treated Estrada, told The Associated Press in December the illness was methodically shutting down her body because, without functioning muscles, “you begin to have trouble speaking, swallowing, breathing, moving, doing your things.”

It remains to be seen whether Peru’s Supreme Court will take the case.