Declines in Duterte approval rating show impact of his actions 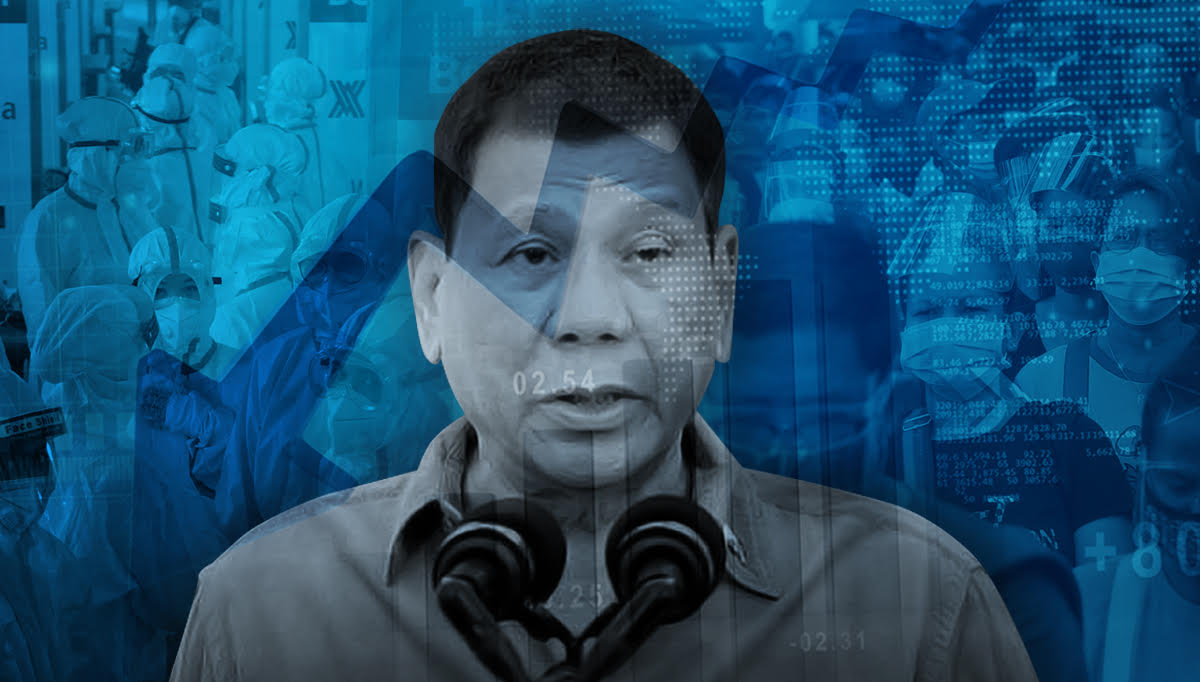 MANILA, Philippines—As the Commission on Audit (COA) released a report on red flags in COVID-19 spending by the Department of Health (DOH), President Rodrigo Duterte lost no time defending his men as the Philippines saw a spike in infections.

Last Aug. 26, as COVID-19 cases drew nearer to 2 million with 1,899,200 infections, Duterte, in his Talk to the People, attacked the Senate for investigating contracts with Pharmally Pharmaceutical Corp., a firm with less than P600,000 in capital but bagged up to P11 billion in COVID supply contracts with the Duterte administration.

Approval of the administration’s fight against corruption and COVID fell. Approval of Duterte’s anti-corruption campaign declined by 12 percent while approval of his COVID handling fell by 6 percent, according to results of a Pulse Asia survey conducted in September.

READ: Pulse Asia: Approval score of Duterte admin in fighting corruption down by 12%

Sonny Africa, executive director of IBON Foundation, said the controversy involving the Duterte administration and Pharmally Pharmaceutical Corp., the firm that bagged up to P11 billion in COVID supply contracts, was definitely the reason for “worsening dissatisfaction” in Duterte’s fight against corruption.

READ: Corruption scandals under Duterte: From whiff to helplessness

“Filipinos have always been very sensitive to corruption as shown by this being a key reason in public opposition to disgraced Presidents Ferdinand Marcos, Joseph Estrada, and Gloria Macapagal-Arroyo,” he told INQUIRER.net.

Last Aug. 11, the COA said it found deficiencies, worth P67.3 billion, in DOH spending, which had an adverse impact on government response to the health crisis that has claimed the lives of 38,828 Filipinos as of Oct. 5.

A week later, Sen. Richard Gordon, head of the blue ribbon committee, started an investigation of COVID spending by the Duterte administration, which the President, in an attack on the Senate investigation, said would “lead to nothing.”

The Senate blue ribbon committee started peeling the layers of P11 billion in contracts that had been given by the Procurement Service of the Department of Budget and Management (PS-DBM) to Pharmally, which was found to have ties with Chinese businessman Michael Yang, Duterte’s longtime friend in Davao City and economic adviser who was removed for being a Chinese national.

Duterte did not hesitate to defend Yang, saying his Chinese friend has been a businessman in Davao in the last 20 years.

“He was the one I instructed to make contact with the Chinese. Of course, he has businesses so he wants in. He’s a businessman of course. What can you do?” Duterte said of Yang.

The Duterte administration saw a decline in people’s approval of its pandemic response. In September 2020, at least 84 percent of respondents said they approved of the administration’s pandemic handling. It was 81 percent in November 2020 but just 77 percent in February 2021.

Last Aug. 15, the Philippines recorded its first case of Lambda, a variant of SARS Cov2, the virus that causes COVID-19. By the end of August, the World Health Organization said Delta, which scientists said was as contagious as chicken pox, has become the dominant SARS Cov2 variant in the Philippines.

READ: In Duterte take on COVID, clarity lost in attacks vs critics

Malacañang previously said Metro Manila will shift to a less strict lockdown from Sept. 8 to 30, but withdrew the decision and declared a modified enhanced community quarantine instead.

The latest government rating for the protection of the welfare of overseas Filipino workers (OFWs) was 66 percent, lower than the 73 percent last June 2021. It was 76 percent in February 2021, 80 percent in November 2020 and 79 percent in September 2020.

Last August, Foreign Affairs Secretary Teodoro Locsin Jr. described the pandemic-related repatriation of OFWs as the “biggest ever in the history of the Philippines.” Since 2020, over a million Filipinos have already been sent home, mostly because of the COVID-19 crisis.

Sen. Joel Villanueva said that as the rate of repatriated OFWs grew, a key concern was that there would be no work for them in the Philippines, saying that it could even result in a spike in the country’s rate of jobless Filipinos.

Last July 26, Duterte endorsed the creation of a Department of Migrant Workers and Overseas Filipinos as a priority measure even if sentiment among OFWs was to just improve services instead of creating another layer in government bureaucracy.

Asked about the Duterte administration’s efforts to help people who lost jobs and livelihood as a result of pandemic lockdowns, 64 percent of respondents in the Pulse Asia survey said it approved. It was a 2 percent decline from a 66 percent approval last June.

Approval of government work in helping the jobless fell to 77 percent in February 2021 from 84 percent in September and November 2020.

Last August, as the government imposed a strict lockdown in Metro Manila in the midst of a spike in COVID-19 cases, the Department of Labor and Employment (DOLE) said the restrictions will impact 127,000 workers in Metro Manila.

The COA, in its yearly report, called out DOLE for its “insufficient internal control measures” in distribution of aid to displaced workers. The COA report said the DOLE, as a result, lost P1 million in excess payouts, left P22.43 million unclaimed aid and P1.824 million “never reached intended beneficiaries.”

In response, the DOLE said it adheres to government regulations in using public resources, saying that this can be proven by consecutive “unqualified” audit opinions given by COA for 2019 and 2020.

On July 3, 2020, Duterte signed the controversial Anti-Terrorism Act of 2020. The law, described as dangerous, was condemned for it could “violate people’s rights and civil liberties.”

Over a year later on July 19, 2021, the Anti-Terrorism Council said the National Democratic Front of the Philippines, the political wing of the Communist Party of the Philippines engaged in peace talks with the government, was designated as “terrorist”.

Last Sept. 1, the United Nations Development Program released a report which showed that the poor “continue to struggle from the disproportionate impacts” of the COVID-19 crisis in the Philippines.

Asked about the government’s efforts to assert Philippine sovereignty against China’s territorial grab, 49 percent of Pulse Asia survey respondents said it approved of the government work. It was a sharp decline from 62 percent in February 2021 and 65 percent in September and November 2020.

In his last State of the Nation Address, Duterte also said there was no other way to stop China from stealing Philippine territory except through negotiations and never by force.

Enforcing the law on all

The latest government rating in enforcing equal justice, 60 percent of respondents said it approved. It was a 7 percent decline from 67 percent in June 2021. It was 69 percent in February 2021, 74 percent in November 2020 and 76 percent in September 2020.

Last August, after the COA released the audit report finding red flags in DOH spending, Duterte quickly cleared Health Secretary Francisco Duque III, saying the health chief “did nothing wrong.” Duterte said he would continue to defend Duque even if it brought him down.

Africa said that Duterte’s immediate defense of his people, without even ordering an investigation, was likely the biggest reason that approval rating on his ability to render equal justice for all declined.

Africa added that people viewed Duterte as someone who protected his friends.

About disaster response, 71 percent said they approved of the work of the Duterte administration. It was 73 percent in June 2021 and 82 percent in February 2021 and in September and November 2020.

In the first week of September, Typhoon Jolina, the 10th storm to hit the Philippines in 2021, left 15 dead in Eastern Visayas. It likewise displaced 79,062 individuals.

While Pulse Asia said that levels of approval for the government’s performance on national concerns declined significantly, “for the most part, public assessment of the work done by the national administration remains positive”.

It said the government enjoyed declines in approval ratings for its handling of nine concerns:

For Africa, however, the ratings reflect Filipinos’ distrust because “the objective situation and people’s daily difficulties are getting so much worse and beyond being glossed over by the government’s propaganda.”

“The administration may put up a brave face but it’s definitely getting alarmed by how its electoral prospects are steadily getting eroded by corruption cases getting closer and closer to President Duterte, and by people increasingly putting the blame for their health worries and economic difficulties on the government’s failures,” he said.

He said Duterte’s so-called teflon armor against criticism will be tested as the “disapproval for his administration worsens”.