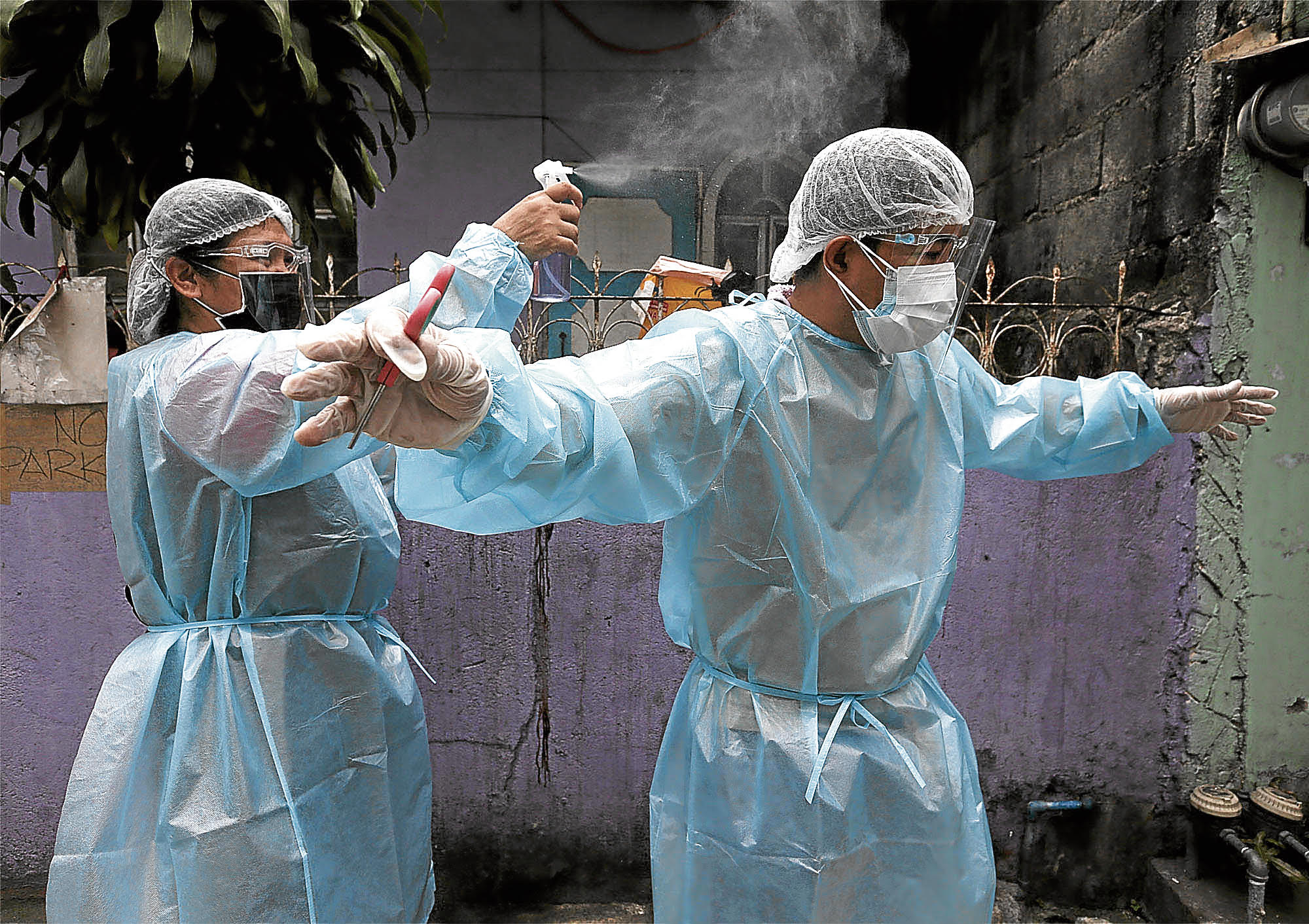 FILE PHOTO: Health workers spray disinfectant as they make their way through a village on lockdown in Manila last March. FILE PHOTO/RICHARD REYES

(This Michael Yang for the last 20 years was a businessman of Davao. He was the one I instructed to make contact with the Chinese. Of course, he has businesses so he wants in. He’s a businessman of course. What can you do?)

That it involved tens of billions of pesos in public funds meant for supplies sorely needed to fight COVID-19 was eclipsed by the jaw-dropping amounts paid to a mainly Chinese company that was formed just months before it bagged juicy deals from the Philippine government.

In an audit report on pandemic spending that has since irked Duterte and drew accusations of it being a hatchet job from his sycophants, the Commission on Audit (COA) not only uncovered deficiencies in spending of P67.3 billion in Department of Health (DOH) funds for COVID, but also provoked a consistent reaction from the President—defending his men or associates against allegations of corruption. 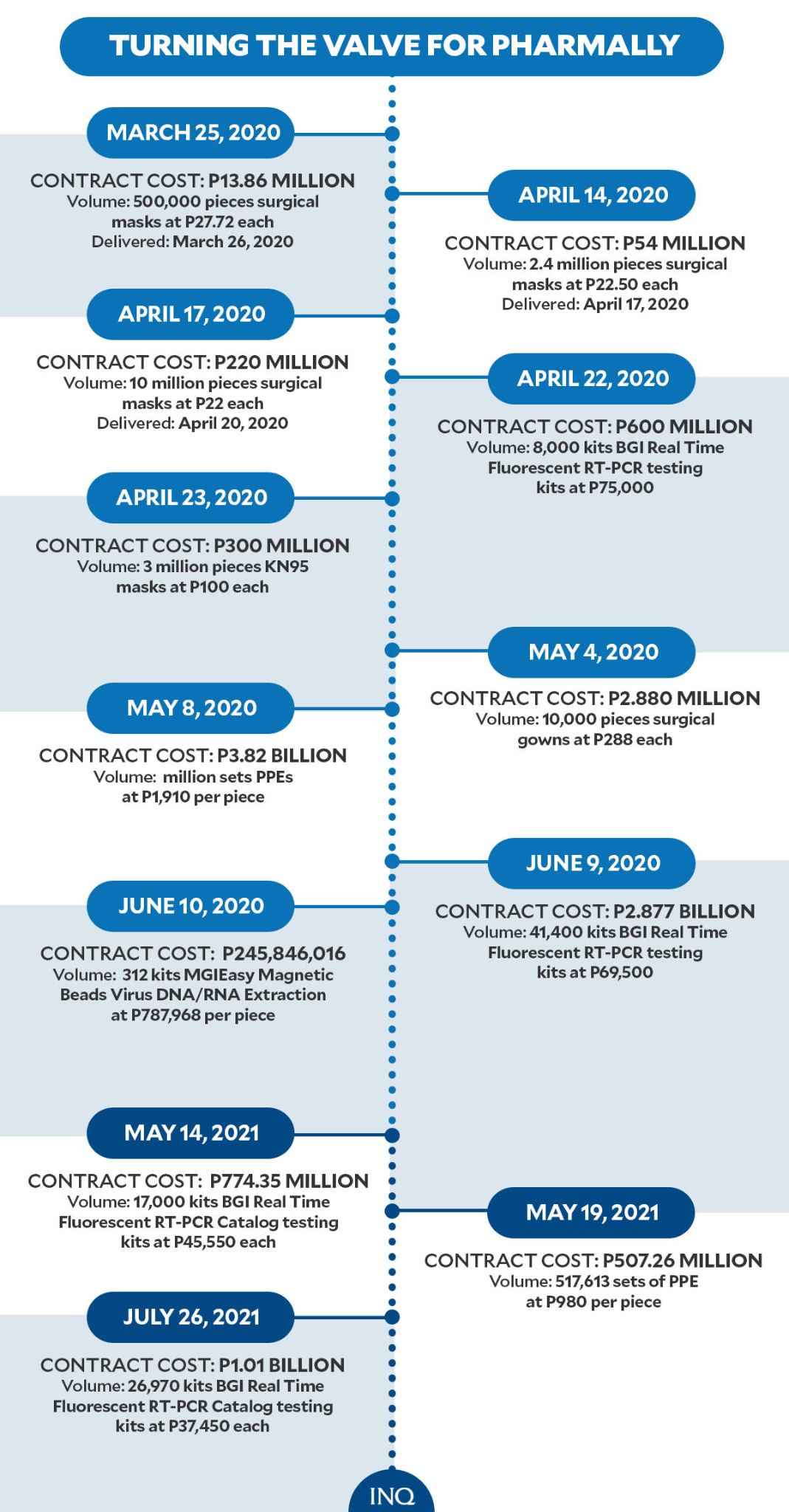 Last Aug. 18, Sen. Richard Gordon, chair of the Senate blue ribbon committee, started the ball rolling for a motu propio (on its own) investigation of spending for COVID.

The hearings unleashed bombshell after bombshell about how a barely year-old company with a capitalization that is not even one percent of the amount of supply contracts it bagged from the Philippine government was able to win such contracts.

The biggest revelations, however, centered on Pharmally and Yang.

While Duterte’s defense of his men, especially Health Secretary Francisco Duque, was expected, his defense of Yang and Pharmally at one point during the Senate hearings “raised doubts,” according to experts.

Sonny Africa, executive director of IBON Foundation, a group that constantly provides analyses of government resources, said that Duterte’s immediate defense of Pharmally and his attacks against those peeling the layers of billion-peso disbursements, was “extremely concerning.”

“Swift action by the President to investigate would have sent the signal that the government is concerned about every meagre peso being spent,” Africa said.

Africa told INQUIRER.net that Duterte’s remarks raised doubts that government spending during the pandemic was not primarily to fight COVID but to enrich officials and associates of the President.

Last Saturday (Sept. 11), during the fifth hearing of the Senate blue ribbon committee on COVID transactions, Duterte took up the cudgels for Pharmally, saying that senators “have no say” on the young company’s technical and financial capabilities to bag government contracts in the midst of the health crisis.

During the Senate hearings, Pharmally executives admitted it didn’t have the financial capacity to procure billion-peso COVID supplies so some company founders approached Yang for help. While initially, Yang admitted his role was just to connect Pharmally with suppliers from China, Pharmally founder Huang Tzu Yen said the company borrowed money from Yang to pay for the supplies.

Duterte declared that no crime was committed.

The President said he was ready to resign if evidence was found linking him to corrupt deals involving Pharmally or COVID spending. “There was delivery, everything is complete – specifications, quality, quantity, and all. The Philippines only made payments after the delivery,” Duterte said.

READ: Duterte vows to resign if there’s proof of corruption in use of COVID-19 funds

But lawyer Zoilo Andin Jr., a procurement specialist, said remarks made by Pharmally founders, including admission of borrowing money from Yang, indicated lapses on the part of the Procurement Service-Department of Budget and Management (PS-DBM) which gave the juicy contracts to Pharmally.

According to Andin, in an interview with ANC, while there was “nothing fundamentally wrong with suppliers borrowing money”, these should have been disclosed to PS-DBM to allow the exercise of due diligence in protecting precious government resources.

“If there was no disclosure of this fact during the time of procurement, then there is somebody [who] dropped the ball,” said Andin.

“Somebody forgot to check on these aspects because the fact that you’re on emergency procurement does not mean that you throw every caution out of the window,” he said.

Last Aug. 27, Sen. Panfilo Lacson said there was either a “collusion” or “lack of due diligence” by Lao in giving government contracts worth billions to a newly established company.

Lao repeatedly said at the Senate hearings that only three requirements were needed from Pharmally and whether they borrowed money or had no money to pay their suppliers was not one of them. 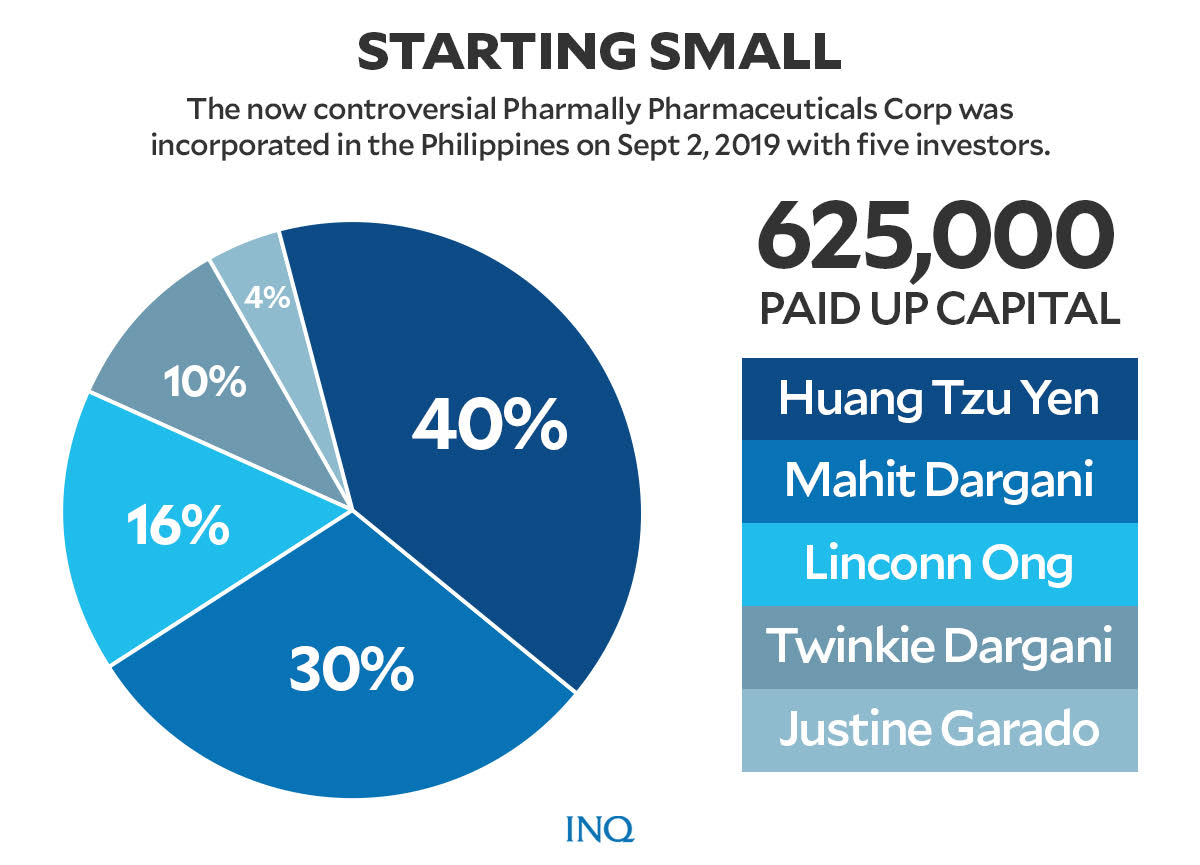 Incorporated on Sept. 2, 2019, Pharmally had a declared capital of P625,000 with Huang Tzu Yen having 40 percent, Mohit Dargani having 30 percent, Linconn Ong having 16 percent, Twinkle Dargani having 10 percent, and Justine Garado having 4 percent.

Because of expenses for taxes and licenses, by the end of 2019, it has P599,540. This prompted the Senate to ask why government officials awarded P8.7 billion worth of contracts to a six-month-old firm with a capital of less than P600,000. 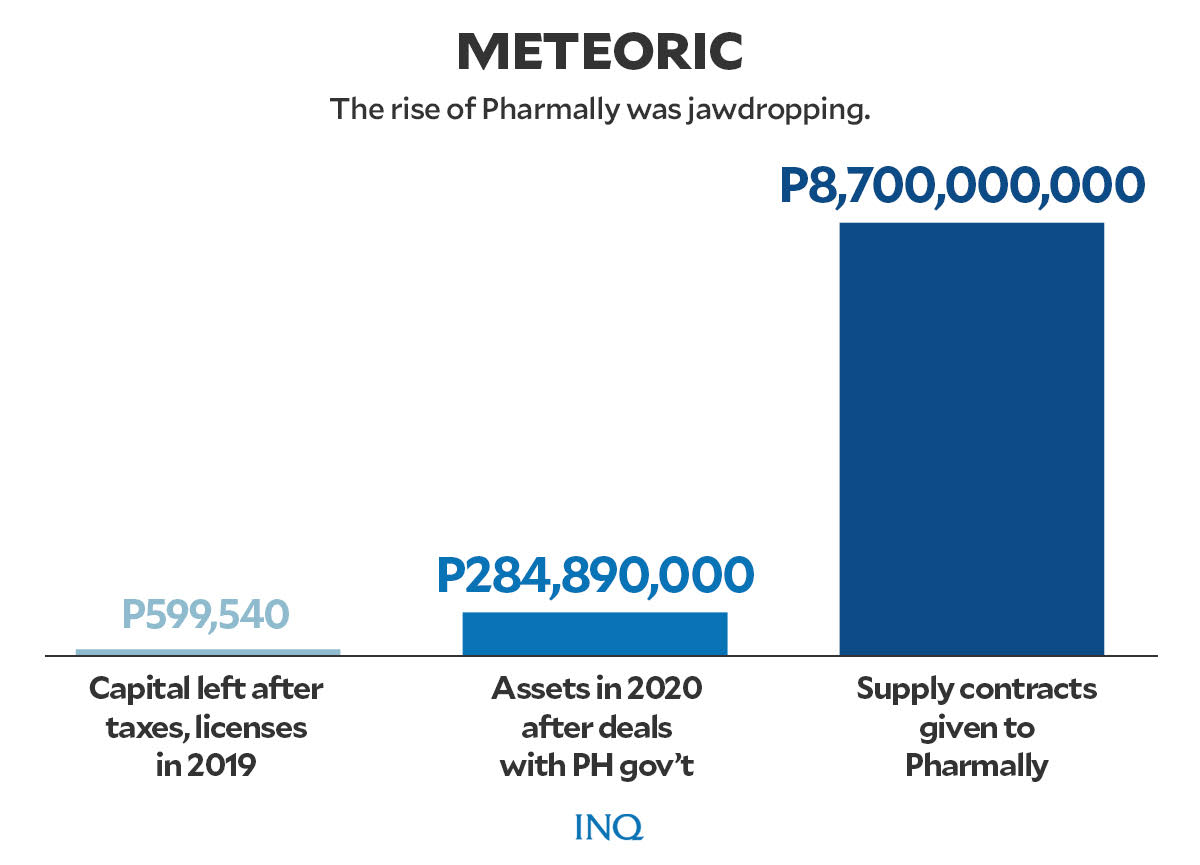 By the end of 2020, the year when it was given contracts related to the fight against COVID-19, its assets increased to P284.89 million, according to Pharmally’s filing at the Securities and Exchange Commission.

Data from the Senate investigation showed the following contracts—worth P8.82 billion—were awarded to the firm:

While P8.82 billion was already excessive, the cost of the contracts given to Pharmally could be higher as it was able to bag the following contracts this year:

Last Monday (Sept. 13), the Senate asked Pharmally officials to provide details of procurement between it and PS-DBM like dates of delivery and dates of payment by the government.

But Pharmally founders and employees, like Ong and a staffer identified as Krizle Mago, gave specifics for only one contract—PO20-00176-CSE—involving 500,000 pieces of surgical masks.

Mago said she received the procurement request from PS-DBM on March 25, 2020. An e-mail she gave the Senate showed that she replied on March 26, 2020.

But also on March 26, 2020, Mago said the surgical masks were delivered to the PS-DBM warehouse in Paco, Manila. What raised more questions was when she said the notice of award of the supply contract to Pharmally by PS-DBM was made on April 6, 2020, or weeks after the delivery had been made.

Mago’s testimony was described as confusing by some senators since it provided conflicting details about the March 25, 2020 contract involving total amount of the procurement to the date of delivery of masks to the PS-DBM warehouse.

Sen. Franklin Drilon said the first contract could have involved “ghost deliveries,” pointing out that “we are having doubts as to whether this was delivered.”

In previous hearings, Sen. Francis Pangilinan said Pharmally had delivered coronavirus RT-PCR testing kits that were incomplete, involving contract No. PO20-00211-CSE. The kits delivered by Pharmally did not have respiratory sample extraction components, it was learned.

Based on the contract, RT-PCR kits should have been delivered from May 1 to July 31, 2020. But extraction kits were provided only two months after the test kits’ delivery.

Sen. Risa Hontiveros asked Mago if Pharmally completely documented the deliveries it made, saying that there are four basic documents needed—delivery order, delivery receipt, inspection and acceptance report and statement of account.

Mago, however, responded that Pharmally didn’t have a delivery order which Hontiveros said should have “started and properly documented” the chain of delivery.

It was likewise revealed that in two instances, the inspection report for the government’s orders of personal protective equipment (PPE) sets were signed even if the items were still in China.

Jorge Mendoza III, former officer-in-charge of the inspection division of the PS-DBM, said he was instructed twice to prepare and sign inspection reports in the Philippines for the sets that were still in China.

When Pangilinan asked him if the sets were delivered only after payments were made by the government, he said yes.

Protection for the ‘innocent’

In the previous hearing, Drilon said there were signs that the firm was favored by the PS-DBM, especially because the company made a delivery even without a purchase order.

The firm was able to win P8.82 billion worth of contracts in the first three months since the declaration of lockdowns in Luzon in March 2020. At one point, Duterte said the government had run out of money to provide food and cash aid to locked down Filipinos because “we no longer have resources.”

For 2020, however, the COA called out the DOH for its transfer of P41 billion to the PS-DBM without a memorandum of agreement required by law.

A part of the amount was used for the procurement of “overpriced” equipment like PPE sets worth P1,910 per set despite these items having an average price of P945 in May 2020 and surgical masks worth P13.50 to P27.72.

The PS-DBM and the Department of Trade and Industry, however, said the high prices were because of scarcity in supply.

In 2020, the Bureau of Treasury said the government spent P461.7 billion in April on government’s cash assistance worth P100 billion for 18 million beneficiaries—P5,000 for those in the provinces and P8,000 for people in Metro Manila.

By May 7, 2020, the Department of Labor and Employment said it disbursed P4.44 billion of its regular funds and P1.05 billion in emergency funds to help 1.06 million displaced workers at that time.

The DOH, meanwhile, said that in the midst of the first strict lockdown in 2020, P47 million was allocated for the Special Risk Allowance (SRA) of health care workers.

However, in November 2020, health care professionals complained about the “delayed” release of benefits for them.

On March 26, 2020, the Philippine Health Insurance Corporation said it will release P30 billion to shoulder the hospital expenses of Filipinos who contracted COVID-19 which, at that time, could cost millions depending on the severity of the condition.

Through the P4.51 trillion national budget for 2021, the government allocated P2.5 billion in DOH resources and P70 billion in “unprogrammed appropriations for COVID-19” for the purchase of vaccines.