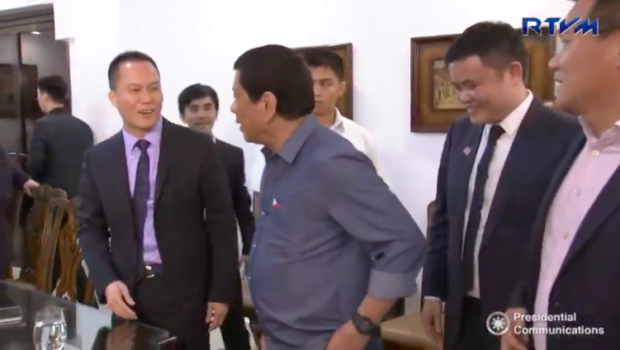 Former presidential adviser on economic affairs Michael Yang with President Duterte during a meeting with officials of Pharmally Pharmaceuticals in Davao City. Image from the March 18, 2017 video of RTVM Malacañang

MANILA, Philippines — President Rodrigo Duterte on Tuesday defended Chinese businessman and his former economic adviser Michael Yang, even clearing him from involvement in the illegal drug trade amid reports linking him to a company that bagged the bulk of government procurement deals.

Yang’s name floated in a Senate investigation last week after an RTVM video was played showing the Chinese businessman and officials of Pharmally Pharmaceuticals Corp. meeting Duterte in Davao in 2017.

“I’ll tell you something. Michael Yang has been in business here in the Philippines for 20 years. Nagumpisa yan dito sa Davao… Hindi yan intsik-intsik na kinukuhanan ko ng pera. You disabuse your mind [of that],” Duterte said in a taped speech aired over state-run PTV on Tuesday.

Duterte added China would not allow the Philippines to transact with Yang if he was really involved in the illegal drugs.

Malacañang had denied Yang’s involvement in the drug trade. Later on, it announced Yang was no longer the President’s economic adviser.