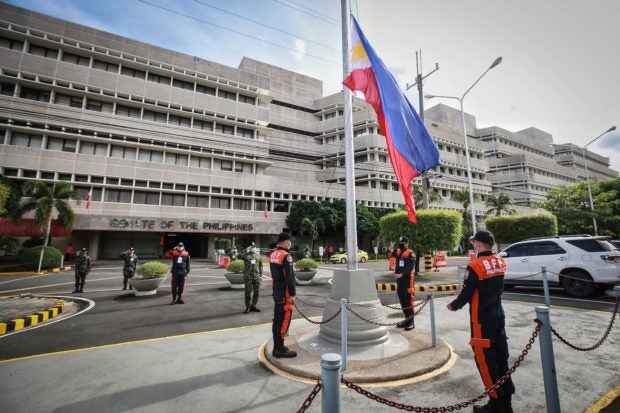 This file photo, taken in June 2020, shows the regular flag-raising ceremony at the Senate with members of the Philippine National Police (PNP) and Bureau of Jail Management and Penology (BJMP) in attendance. (File photo by JOSEPH VIDAL / Senate Public Relations and Informatio Bureau)

Sen. Risa Hontiveros is considering the possibility that Health Secretary Francisco Duque III and Lloyd Christopher Lao, the former head of the Procurement Service of the Department of Budget and Management (DBM), are the “leading actors” in the controversial contracts awarded to Pharmally Pharmaceutical Corp.

“Possibly among the supporting actors is former economic adviser Yang. And I don’t know if the president had a cameo role, but because of that video that was recorded by the RTVM itself and freely accessible on YouTube, it appears that they also have at least cameo roles, right?” Hontiveros told reporters in Filipino in an online interview.

She was referring to a 2017 video of former presidential economic adviser Michael Yang and Pharmally officials meeting President Rodrigo Duterte in Davao City. The video, she said, gives the impression that the firm has “friends in high places.”

The video was played during the Senate blue ribbon committee’s hearing last Friday.

“These are things that we must establish in the Blue Ribbon hearing because any procurement using the limited funds that we have, especially in the middle of a pandemic, should be very clean of any conflict of interest or undue advantage or influence peddling,” Hontiveros went on.

“Those are the things we still have to learn until the hearing ends,” she added.

She said questions could be raised on whether Yang could have had a hand in recommending Pharmally as a supplier not only to the Department of Health and the DBM Procurement Service but also to the Office of the President.

“So those are the dots that we will more firmly connect until we finish this Senate Blue Ribbon committee hearing to establish the cast of characters there and what roles they played,” she said.

“It’s on the role that each of them played that we will base the accountabilities with which we should charge them,” she added.

The Senate Blue Ribbon committee, chaired by Sen. Richard Gordon, has been looking into the handling of the DOH of its pandemic funds.

During the inquiry, senators questioned the transfer of P42 billion from the DOH to the DBM Procurement Service for the purchase of pandemic response supplies, including allegedly overpriced items from Pharmally Pharmaceutical Corp.

Hontiveros said it was “very possible” that the Blue Ribbon panel would recommend charges against Lao and Duque.

“In fact, Sen. Frank [Drilon] said in this case of what he called ‘premeditated plunder’ it’s possible that plunder would be the charge against Usec Lao and also Secretary Duque. So this is really grave,” she added.

In a separate statement, Drilon said Lao and Pharmally had a “mystery backer.”

“The challenge now is to be able to identify that backer because that backer is the missing link that will connect the dots in this controversy,” he said.

“Circumstantial evidence would show patterns of corruption,” he added. “Who was Lao’s backer? Who was the backer of Pharmally? Don’t hide it because the truth will still come out.”

In September last year, Drilon already flagged the alleged overpricing of supplies that the DBM Procurement Service bought from Pharmally.

In last Friday’s Senate hearing, Lao said his team did the “best” it could to ensure that the price of supplies being procured at the time was the “most affordable.”

“It’s difficult. There is no history to compare the scenario we were in because it is the first time, I think in my generation, I have never experienced a pandemic. We were just reacting during that time to what we had. Our capabilities are limited. Our capacity is limited. Our personnel skills are limited,” he added.

“Based on that, we acted on it. It’s a judgment call: Either we can buy or we cannot buy. Either we get it now or we don’t get it now. That’s the only thing I have in my mind,” Lao further said.

Meanwhile, in an earlier House hearing, Duque said that the DOH did try to procure on its own but said there were no available bidders at the time due to a limited supply.

READ: DOH also asked DBM to procure COVID-19 jabs, but got turned down