Duque, Lao may be liable for ‘premeditated plunder’ for DOH fund mess – Drilon 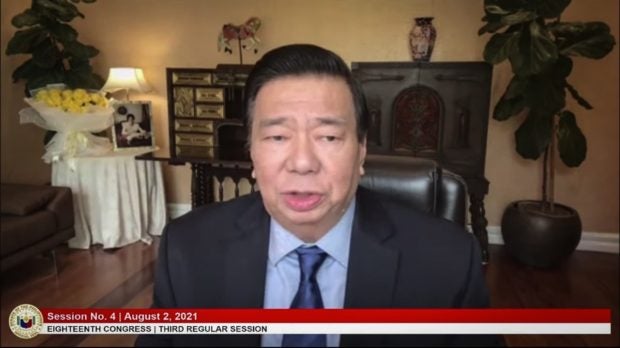 Drilon said Lao could face plunder charges as he was directly responsible for the Department of Health’s (DOH) supply deals coursed through the Procurement Service of the Department of Budget and Management (PS-DBM), which was then headed by Lao. Duque, on the other hand, “made it possible” for the transactions to happen when he authorized what could be an irregular transfer of funds to Lao’s office, the senator explained.

Neither Duque nor Lao could be reached for comment at press time.

In a dzBB radio interview, Drilon said there was apparent plunder of public funds in the overpricing of supplies for pandemic response under the PS-DBM transactions.

“It was all planned. If you look at the series of events—I’m a lawyer—if you don’t have direct evidence, you can look at the circumstances,” Drilon said.

“It seems to have been planned. If there is premeditated murder, here, we have a premeditated plunder. For me, in times of the pandemic, this is treachery,” he said.

Under the law, plunder is committed when “any public officer who, by himself or in connivance with [others] … accumulates or acquires ill-gotten wealth through a combination or series of overt criminal acts … in the aggregate amount or total value of at least P50 million.”

Documents on the DOH website showed that the Duque-led agency contracted Pharmally and another firm, Business Beyond Limits OPC, for the purchase of 2,005,860 face shields on June 11 this year, after the joint venture won the bidding with a price of P37.9 million, or P18.88 apiece.

This was on top of about P8.7 billion worth of contracts for allegedly overpriced face masks, personal protective equipment sets and COVID-19 test kits awarded to Pharmally in mid-2020 by Lao as PS-DBM head.

At the time the 2020 contracts were signed, Pharmally was just a few months old since its September 2019 incorporation with a paid-up capital of only P625,000, according to Drilon.

The senator noted significant disparities between the prices quoted by Pharmally and prevailing market rates at the time, including even the prices offered by other firms contracted by the PS-DBM, some of which were less than half of Pharmally’s.

The PS-DBM entered into negotiated procurement deals with Pharmally and several other companies on the DOH’s behalf after Duque transferred P42 billion of the health department’s funds to the procurement office for emergency medical supplies.

However, in its 2020 audit of the DOH, the Commission on Audit questioned the propriety of the transfer to the PS-DBM without a memorandum of agreement, among other accounting deficiencies, prompting the Senate blue ribbon committee to investigate.

Senators tried to summon Pharmally executives to the Aug. 27 hearing, but discovered that two of the officers had given a fake address at a Taguig condominium in the firm’s 2020 general information sheet filed at the Securities and Exchange Commission. A third officer was also unreachable and left her San Juan residence in May.

Drilon said it appeared that the DOH could not be bothered to investigate Pharmally’s background before awarding the recent face shield supply deal “because they didn’t care anymore.”

Lao, a lawyer, served as an undersecretary at the Presidential Management Staff-Office of Special Assistant to the President, an office headed by Christopher Lawrence “Bong” Go when he was still President Duterte’s aide. Go, who was elected senator in 2019, however, denied that Lao directly worked under him.

Lao claimed during Friday’s Senate hearing that he applied for the undersecretary position with no one recommending him, but the senators doubted him.

Drilon said in jest that it was clear to everybody that Lao had an “MBA,” but it’s “not for Master of Business Administration, but May Backer Ako (I have a backer).”

The Aug. 27 hearing also led senators to speculate about the connection between Pharmally and Michael Yang, a former economic adviser of Mr. Duterte, after Sen. Richard Gordon, the Senate blue ribbon chair, played a video showing Yang and officials of Pharmally meeting the President in Davao City in 2017.

Gordon said he showed the video to allow the public to connect the dots on how Pharmally managed to bag deals despite its small capitalization.

Besides Duque and Lao, Drilon said the Senate should dig deeper into the suspicious procurement deals to determine who else could be liable and how high up the hierarchy the inquiry might lead to.

He said he did not believe former Budget Secretary Wendel Avisado had any role in the negotiations, but the latter might help direct the Senate where to look to “unravel the mysteries in Pharmally.”

Sen. Joel Villanueva on Sunday also recommended that all government agencies stop using the PS-DBM as their buying arm for big-ticket projects “until the agency has been reformed and cleared of controversies.” INQ