As whiff of corruption emits bad odor, Duterte quick to defend his men 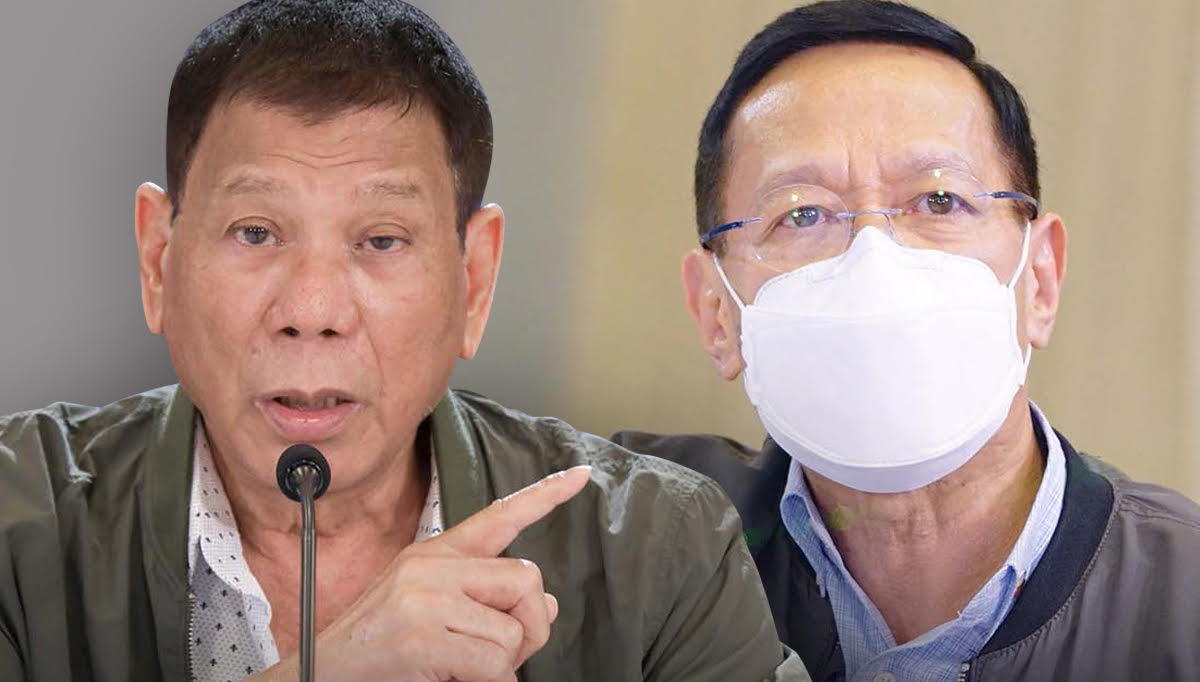 This was President Rodrigo Duterte’s most famous declaration in 2016 which could have sent shivers down the spine of those planning to commit graft in the government.

Less than a year before Duterte steps down, however, analysts and critics said there have been few actions to match his strong words. The war on corruption has taken a quiet turn, to say the least.

Dennis Coronacion, a political expert from University of Santo Tomas, said that “to begin with, the Duterte government has no serious program against corruption.”

He told INQUIRER.net that while Filipinos would hear the President warning officials of dire consequences if they were found stealing government resources, including being fired, his words “don’t deserve to be called a serious fight against corruption.” 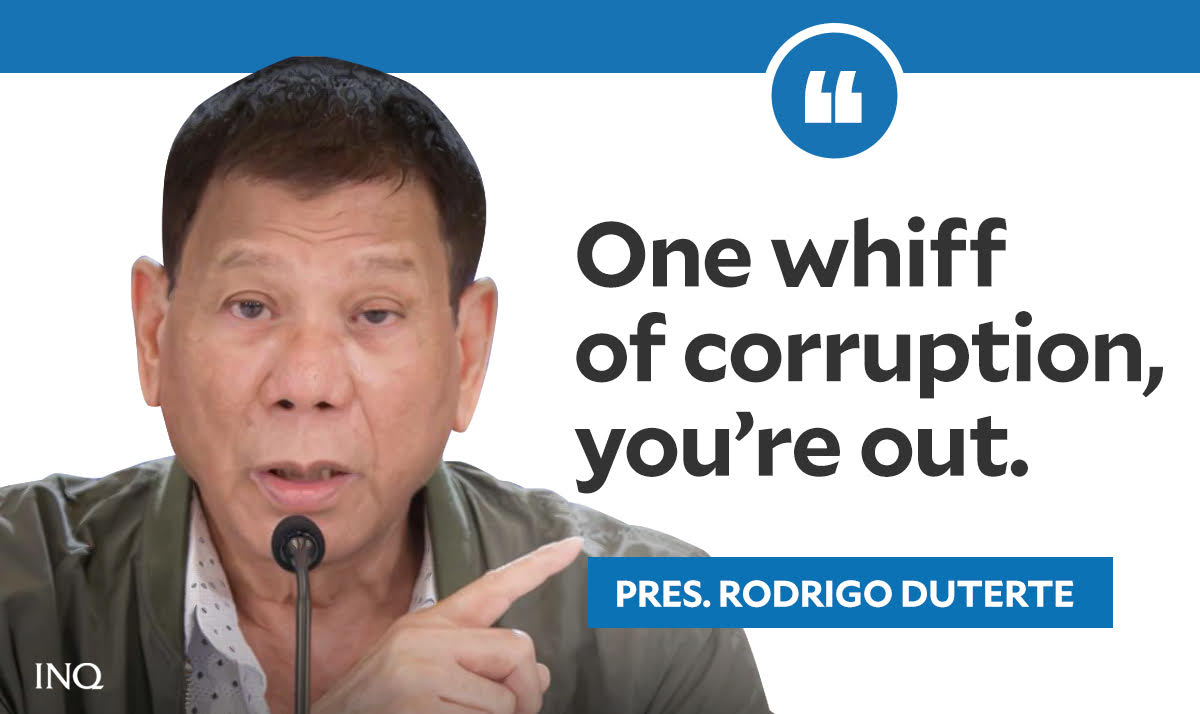 Lawyer Rodel Taton, dean of the Graduate School of Law of the San Sebastian College-Recoletos, said that “change may not actually come” under Duterte, especially as his time as president is running out.

They said that the President’s constant defense of top officials entangled in corruption, or whiffs of corruption scandals is sending the wrong signal about his fight against graft.

Last Friday (Aug. 27), Sen. Panfilo Lacson said officials being investigated for allegations of corruption do not face legal cases because there is a President who defends them.

Recently, in the midst of investigations of the government’s spending of resources in the fight against COVID-19, the President said he was the one who ordered Health Secretary Francisco Duque to “rush” the purchase of personal protective equipment (PPE) sets and do away with bidding.

At a hearing of the Senate Blue Ribbon Committee, Duque said the DOH transferred P42 billion from its allocations to the Procurement Service-Department of Budget and Management (PS-DBM) to heed Duterte’s directive. 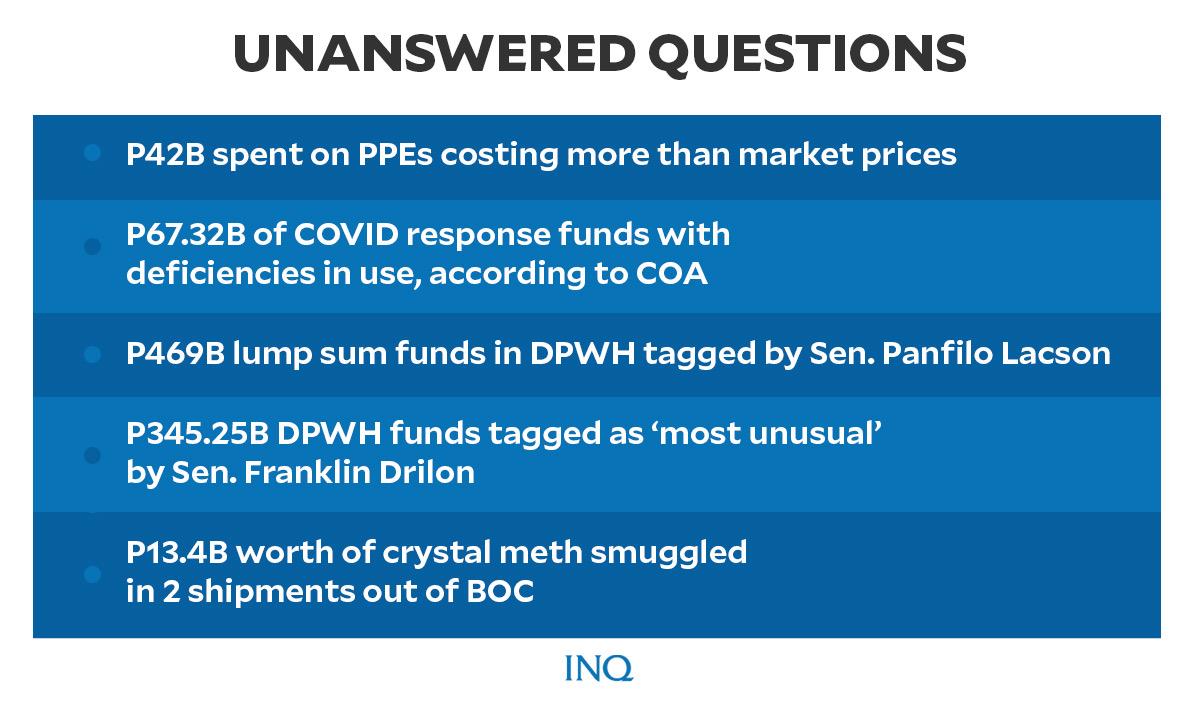 In 2020, when protests were aired over the overpriced PPE sets, Duterte rushed to Duque’s defense, saying he was the one who instructed Duque to skip bidding procedures to acquire the PPEs because the country was in “a tight situation.”

It was not the first time Duterte would defend his health chief or other top officials that the President shielded from accusations of wrongdoing because “he has confidence in them.”

Coronacion said Duterte “passionately defends” his top officials against accusations of irregularity or corruption instead of keeping his distance and giving free rein to government investigators to do their jobs, which was the behavior expected of a President who swore to fire officials at the slightest whiff of corruption.

In 2020, as health experts and critics questioned the capability of Duque in handling the COVID crisis, the DOH chief was asked by legislators and health workers’ groups to resign. Duterte stood his ground and kept Duque.

On June 17, 2020, the Office of the Ombudsman decided to investigate “motu proprio” the DOH for alleged COVID-19-related “irregularities and anomalies.”

The Ombudsman said that it will look into the delayed acquisition of PPEs, delay in release of funds to medical workers, lapses leading to health workers’ deaths and confusion in the reporting of COVID cases.

In defense of Duque, Duterte said he would “bet his reputation” that “there are no anomalies” because the people he chose to be in his Cabinet had “honesty and integrity.”

In August 2020, Duque was linked to fund irregularities at the Philippine Health Insurance Corp. (PhilHealth) as the state insurer’s ex-officio board chair. Witnesses said a “mafia” in PhilHealth was behind the misuse of at least P15 billion in the insurer’s funds.

In September 2020, the Department of Justice started an investigation into PhilHealth.

But before the DOJ investigation could start, presidential spokesperson Harry Roque said Duterte is keeping his trust and confidence in Duque.

In October 2020, Duterte said he “can’t really find a good reason to prosecute an innocent man.”

In August 2021, the DOH was called out by the Commission on Audit (COA) for “deficiencies” involving P67.32 billion worth of funds intended for government efforts against the COVID-19 crisis.

Without results of an investigation, Duterte dismissed the COA report and declared he was standing by Duque even if it cost him the presidency because he saw no corruption in DOH.

Since 2016, Duterte repeatedly said there is “rampant” corruption in the Department of Public Works and Highways (DPWH), saying that no infrastructure project could start without “below-the-table” deals.

In September 2020, Sen. Panfilo Lacson called out P469 billion in “reappropriated and lump sum projects” included in the proposed DPWH budget for 2021. The next month, Sen. Franklin Drilon raised concern over the “most unusual” P345.25 billion in DPWH appropriations.

Duterte, however, was quick to clarify that his rant on corruption in DPWH did not include Public Works Secretary Mark Villar.

“Villar is already rich. He doesn’t need to steal government resources because he has a lot of money. The problem below is still rampant. The projects below, that is the game,” said the President.

Malacañang issued a statement saying that the President has “full trust and confidence” in Villar because “despite the corruption in DPWH, he was able to deliver.”

Cesar Montano, a celebrity who campaigned for Duterte’s 2016 candidacy, was appointed as chief operating officer of the Tourism Promotions Board (TPB).

In March 2017, however, a complaint was filed against him for alleged irregularities in the TPB.

TPB personnel said they “lost trust and confidence” in Montano as they personally witnessed irregularities being committed.

The complaint said Montano entered into a P16.5 million sponsorship contract with a company that organized a “rally” for Duterte last February 2017. The contract was highly irregular, said TPB employees.

However, Duterte, even before a unit was created to look into complaints filed against TPB top officials, ran to Montano’s defense and declared his trust for the actor.

“All they have to do is file a case. If you have a gripe and you think there is something wrong there, file a case, but I trust the guy,” said Duterte.

“That’s why I appointed him. If I had no confidence in that person, I would not have appointed him,” he said.

Duterte said that he believed Montano will not steal government funds because “he has money.”

In 2017, Sen. Franklin Drilon said the Bureau of Customs (BOC), headed by then Commissioner Nicanor Faeldon, was “clearly” involved in cases of drug smuggling at the Manila International Container Port.

In May of that year, P6.4 billion worth of illegal drugs (604 kilograms) from China were discovered hidden in warehouses in Valenzuela City. The drug shipment got past screening by the BOC.

In a hearing in July 2017, Sen. Richard Gordon said, “The gang who couldn’t shoot straight. Either you are incompetent or corrupt. That’s the whole point here. They get past the green lane [because] your own men assist them, you’re coddling them.”

However, Duterte said he has confidence in Faeldon and even told him to “focus on serving the country”. In Aug. 2017, Faeldon resigned. The President accepted his resignation, saying that “he is an honest man, some people just got past him.”

In Nov. 2017, the DOJ dismissed the drug cases filed against Faeldon and other government officials, saying that evidence from the Philippine Drug Enforcement Agency was insufficient to establish probable cause.

In August 2018, drugs worth P2.4 billion and P11 billion were intercepted in Manila and Cavite and hidden inside magnetic lifters.

That time, Isidro Lapeña was the BOC head as he was appointed by the President following the resignation of Faeldon.

Duterte, however, stood for Lapeña, saying that he was a military man and that the drugs “really slipped past them.” He later appointed Lapeña as head of the Technical Education and Skills Development Authority.

On Dec. 5, 2018, the Volunteers Against Crime and Corruption condemned the decision of the Senate to clear Lapeña of liability in the drug smuggling cases.

“Lapeña should be held liable by virtue of command responsibility and for allegedly covering up the suspected shabu haul, which would make him an accessory to the crime,” VACC said.

In January 2019, the National Bureau of Investigation filed complaints against Lapeña for dereliction of duty, grave misconduct, and graft – all because he failed to file a case against the consignees of the magnetic lifters that contained drugs.

“Despite the lapse of time, Commissioner Lapeña did not file any case against the shippers or consignees of the magnetic lifters, which should have been done upon discovery of the goods by misclassification, since it is very obvious that the declaration made by the shipper is not the same as what were intercepted,” the NBI said in its complaint.

Taton, of the San Sebastian graduate school of law, said there are “integrity issues” involving many of the President’s men. But Duterte has been “inconsistent in terms of his men in the government who faced issues of corruption.”