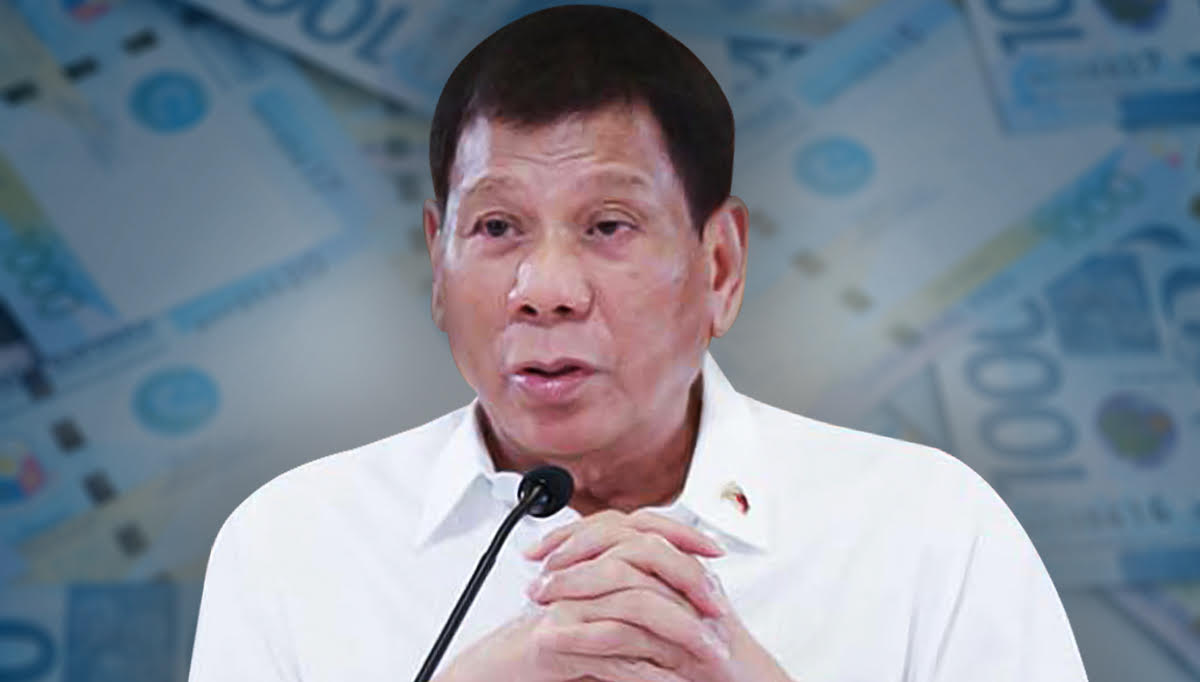 The President, who once declared he won’t condone even a “whiff” of corruption, has been drawn to saying “you cannot stop corruption” by what he and his explainers said was the sheer enormity of the problem.

In his last State of the Nation Address, Duterte said corruption was “endemic in government” and “nobody can stop corruption unless you overturn the government completely.”

To get rid of corruption, he said martial law should be declared. He earlier said “the most that we can do is to fight it” because “if you don’t want corruption, then close the government.”

“We are not proclaiming that we have gotten rid of corruption. There is still corruption in this government and any other government that will come after me and in the past — it is always there,” he said.

In 2016, however, when he was still campaigning for the presidency, Duterte declared that if he was elected, he will get rid of corruption. “Give me about three to six months,” he said.

Five years later, the Commission on Audit (COA) released a report finding “deficiencies” in the use of P67.3 billion by the Department of Health (DOH) in the fight against COVID-19, including P41 billion transferred to the Procurement Service-Department of Budget and Management (PS-DBM).

The COA said the fund transfer was not covered by documents which led to the delay in delivery of medical supplies essential in pandemic response.

This became a trigger for the Senate to look deeper and to find signs of irregularities in fund use, especially for supplies from Pharmally Pharmaceutical Corp, a company incorporated just months before it bagged billions of pesos in supply contracts.

Renato Reyes Jr, secretary general of the leftwing militant group Bayan, said the deals had “the makings of a scam of the decade.”

From March 2020 to July 2021, the firm that was incorporated last Sept. 2, 2019 with a capital of less than a million had contracts with the government worth P11 billion.

Accountant Jahleel-An Burao said after the analysis of the company’s financial statements, it was notable that it “does not appear to be financially capable” to finance the contracts given to them.

The President, however, insisted that there was no corruption in government procurements for the fight against the pandemic, saying that items were bought at the height of the outbreak, “when the prices of supplies skyrocketed due to scarcity of supply and abrupt demand increase.”

In his latest Talk to the People, he alleged that senators were the ones involved in corruption and his Cabinet members were “clean.”

READ: Duterte insists ‘no corruption’ in gov’t procurement during pandemic

Last Sept. 1, as the President went all out in his defense of Health Secretary Francisco Duque III, Dennis Coronacion, a political expert from the University of Santo Tomas, said “the government has no serious program against corruption.”

In 2018, Sen. Panfilo Lacson, citing Commission on Audit data, said P583.5 billion had been wasted because of discontinued or shelved projects. “We’re either overtaxed or underserved, or both,” he said.

He thanked COA in August that year for “diligently performing your mandate,” saying that it was “disgusting” that billions of government funds had been “wasted on corruption and incompetence.” 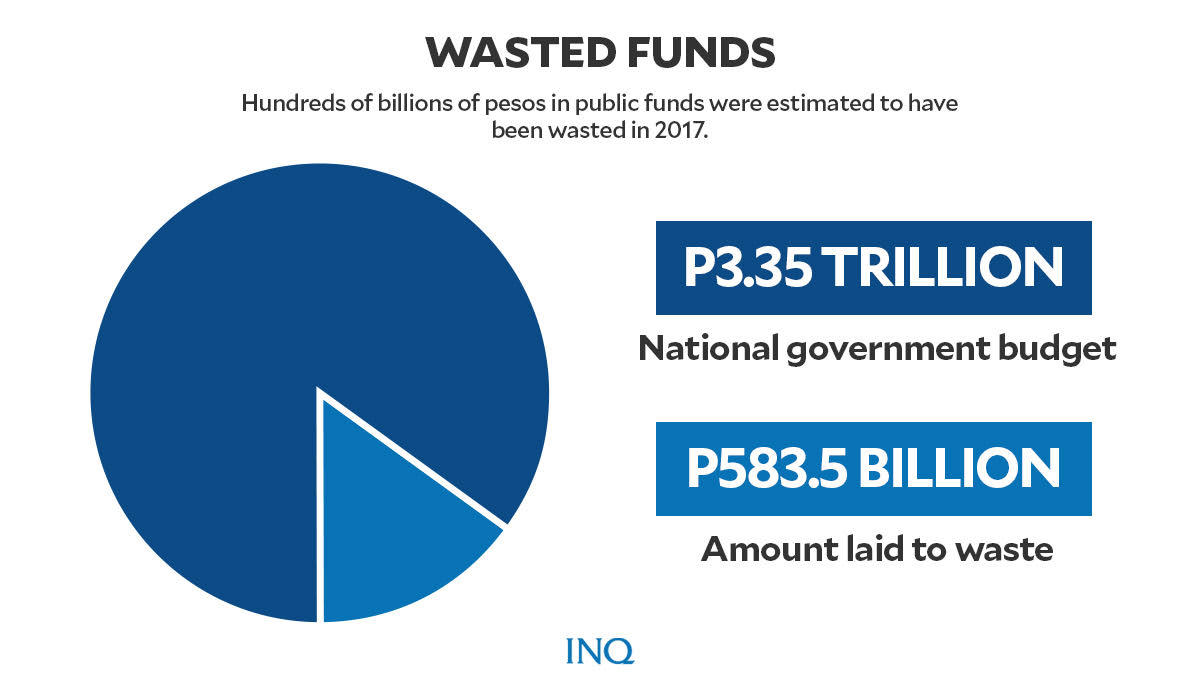 Lacson said in a roundtable discussion with the INQUIRER in 2018 that the P583.5 billion was 17.4 percent of the government’s P3.35 trillion national budget in 2017.

He said the COA suspended government transactions worth P402.8 billion, disallowed projects worth P20 billion, and issued notices to other projects worth P160.7 billion still in litigation or “charged.” 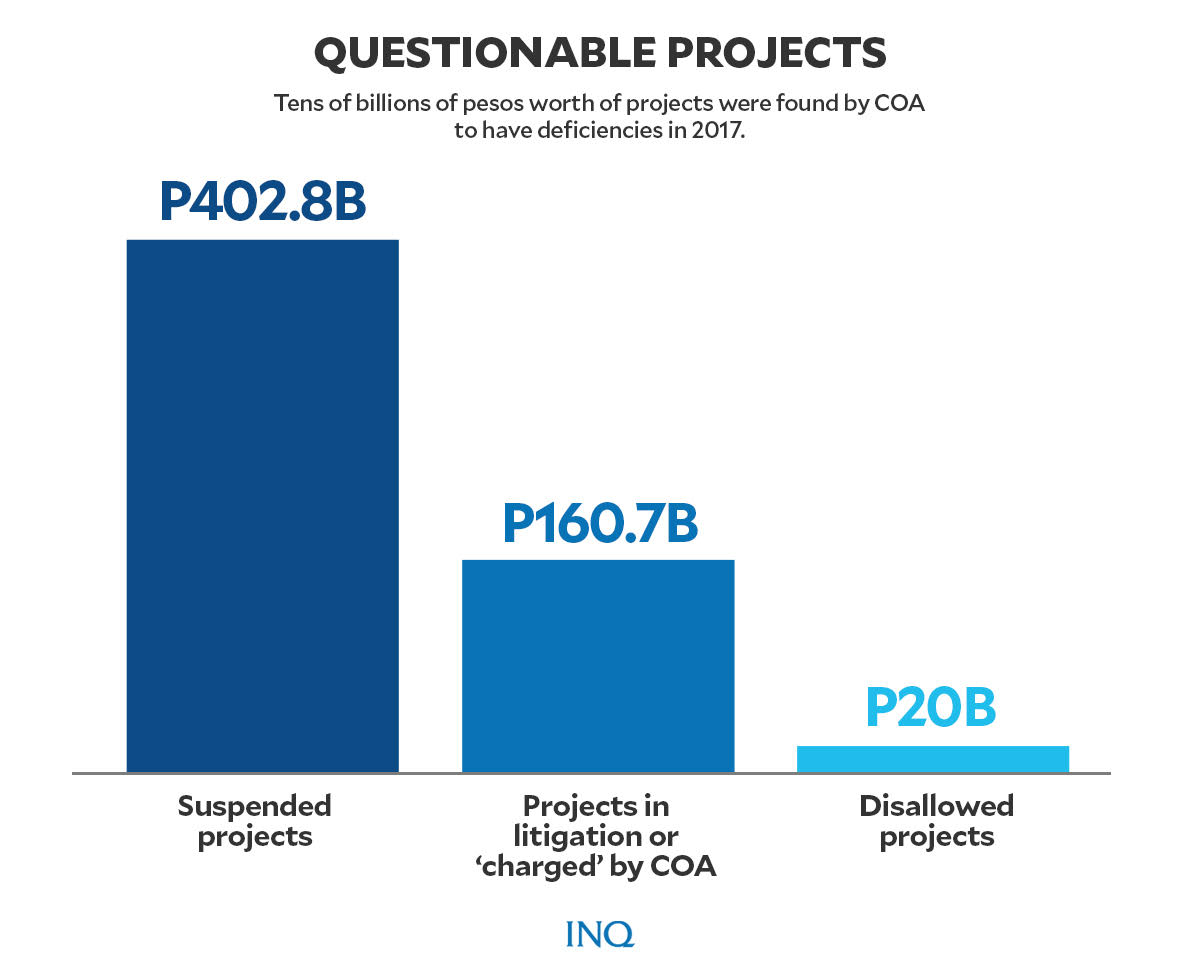 The COA, as an independent constitutional commission, has the power to issue notices to disallow, suspend or charge “irregular, unnecessary, excessive, extravagant or unconscionable expenditures or uses of government funds and properties.”

When asked regarding this, then Presidential Spokesperson and Chief Presidential Legal Counsel Salvador Panelo said “projects were stopped, because there is a legal issue involved.”

“Possibly, the losing bidder filed [a case], so it was stopped. But it doesn’t mean it was wasted, it was only stopped,” he said.

Panelo, asked if the government will initiate an investigation, said, “It doesn’t have to do that. Because precisely […]  if COA finds something irregular, then it’s their duty to recommend filing of charges and [it] is also the duty of DOJ (Department of Justice) to do the same, file it.”

He said the President is always reminding his officials that if there will be problems on how they manage government resources, “you will be accountable to me.”

The INQUIRER independently checked Lacson’s list with the COA and found two government offices which had the biggest share of the disallowed or suspended projects.

The Bureau of Customs had suspended projects worth P379.7 billion, disallowances worth P424.2 million and notices of charges worth P12.7 billion.

The Department of Energy had suspended projects worth P146.9 billion while the Department of Agriculture had a share of P8.11 billion. The Armed Forces of the Philippines had P6.46 billion. 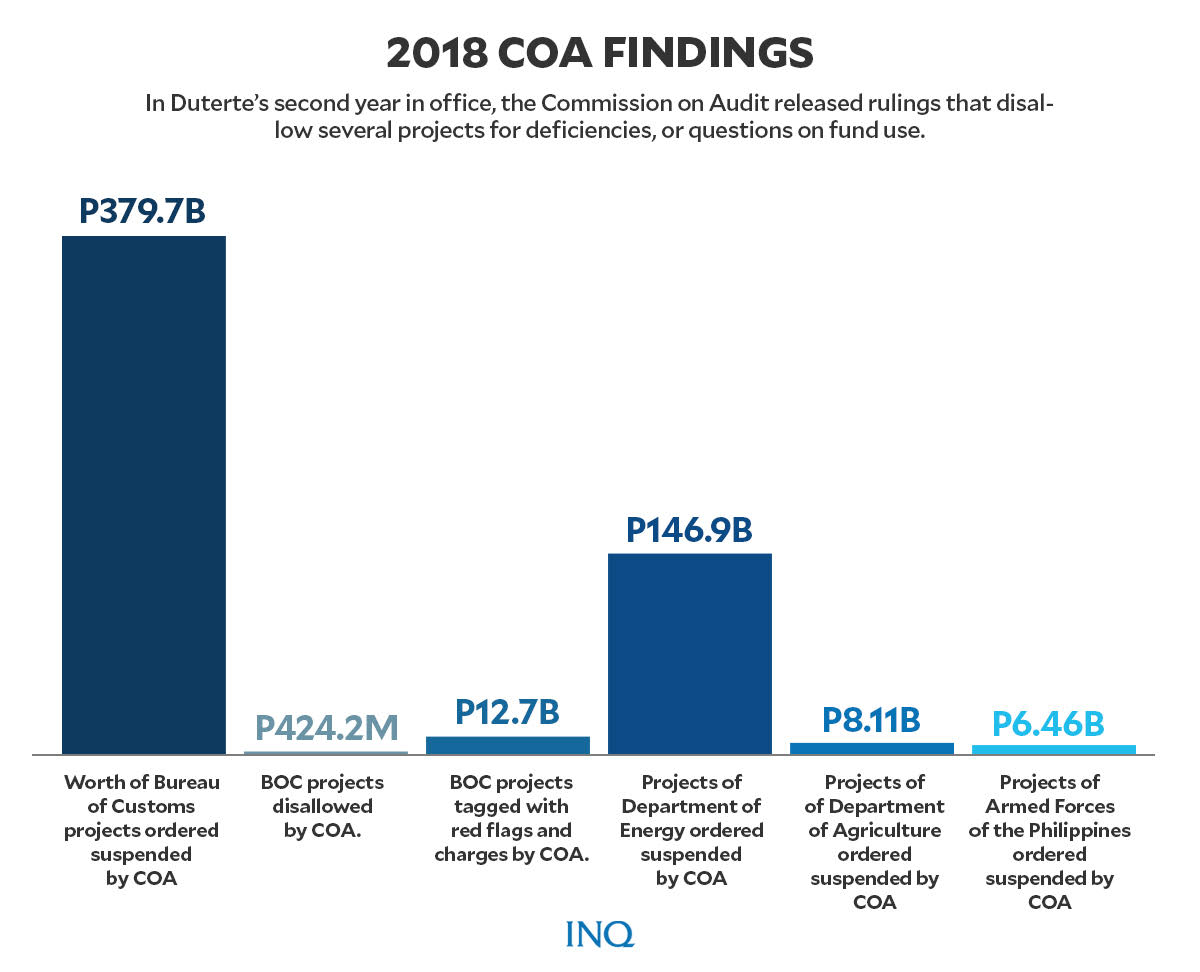 In 2017, P6.4 billion worth of illegal drugs from China were discovered hidden in warehouses in Valenzuela City as the shipment got past what should have been tight screening by the Bureau of Customs (BOC).

The illegal drugs, which were lodged in five metal cylinders that went through the Manila International Container Port, were later seized.

In an investigation by the Senate, Sen. Franklin Drilon said then Commissioner Nicanor Faeldon, who was later transferred to the Office of the Civil Defense and the Bureau of Corrections, was “clearly” involved.

The President, however, said that Faeldon should “focus on serving the country” because he has confidence in the former rebel soldier.

The following year, 2018, four empty magnetic lifters, believed to have been carrying P11 billion worth of illegal drugs, were discovered in General Mariano Alvarez in Cavite.

Then BOC Commissioner Isidro Lapeña, who was later moved to the Technical Education and Skills Development Authority, initially insisted that there were no illegal drugs, but he conceded after it was found that these matched two other magnetic lifters in Manila.

In 2019, the National Bureau of Investigation filed complaints against Lapeña for dereliction of duty, grave misconduct, and graft—for failing to file a case against the consignees of the magnetic lifters that contained drugs.

Despite the controversies, Duterte said Faeldon and Lapeña are not corrupt: “I will not appoint them if they are corrupt. It really slipped past them. It was the insider. They were eaten by the system.”

“They work a lifetime as a soldier, fighting for this country then you will only treat them like that?” he added.

The following year, 2020, officials of the Bureau of Immigration (BI) “received” bribes allowing hundreds of thousands of Chinese individuals to illegally enter the Philippines and work for Philippine Offshore Gaming Operators.

It was exposed by Sen. Risa Hontiveros in a Senate investigation. It was said that BI officials provided “VIP treatment” to Chinese individuals for a P10,000 “service fee” each.

Last July, Malacañang said Duterte was expecting the DOJ to make sure that BI officials involved in the bribery scandal will be dismissed from service.

READ: 43 who were supposedly ‘fired’ for ‘pastillas’ scam back from suspension

The remark was made following reports that not one of those linked to the scam had been fired. Presidential Spokesperson Harry Roque explained that the President may have not been aware that the officials have returned to work pending the investigations.

In 2021, the COA called out the Philippine Health Insurance Corporation (PhilHealth) for its payment schemes that lacked control mechanisms to detect and prevent fraud.

“COA found that PhilHealth was remiss in conducting the annual or even periodic review of the case as required, in order to determine whether the case rate for a particular treatment is responsive to the actual costs,” it said.

It was in 2019 when the INQUIRER exposed that PhilHealth officials approved and released payments for patients who are already dead and those who have not yet completed treatment.

Because of the controversy, Duterte asked PhilHealth executives to resign, saying that he was disappointed with the corruption allegations and that he wanted a “clean slate” for the office.

In 2020, Duque was linked to the alleged “misuse” of at least P15 billion in the state insurer’s funds, as ex-officio head of the Board of Directors.

The DOJ was instructed by the President to investigate, but before the investigation could start, Roque said Duterte is keeping his trust and confidence in Duque. 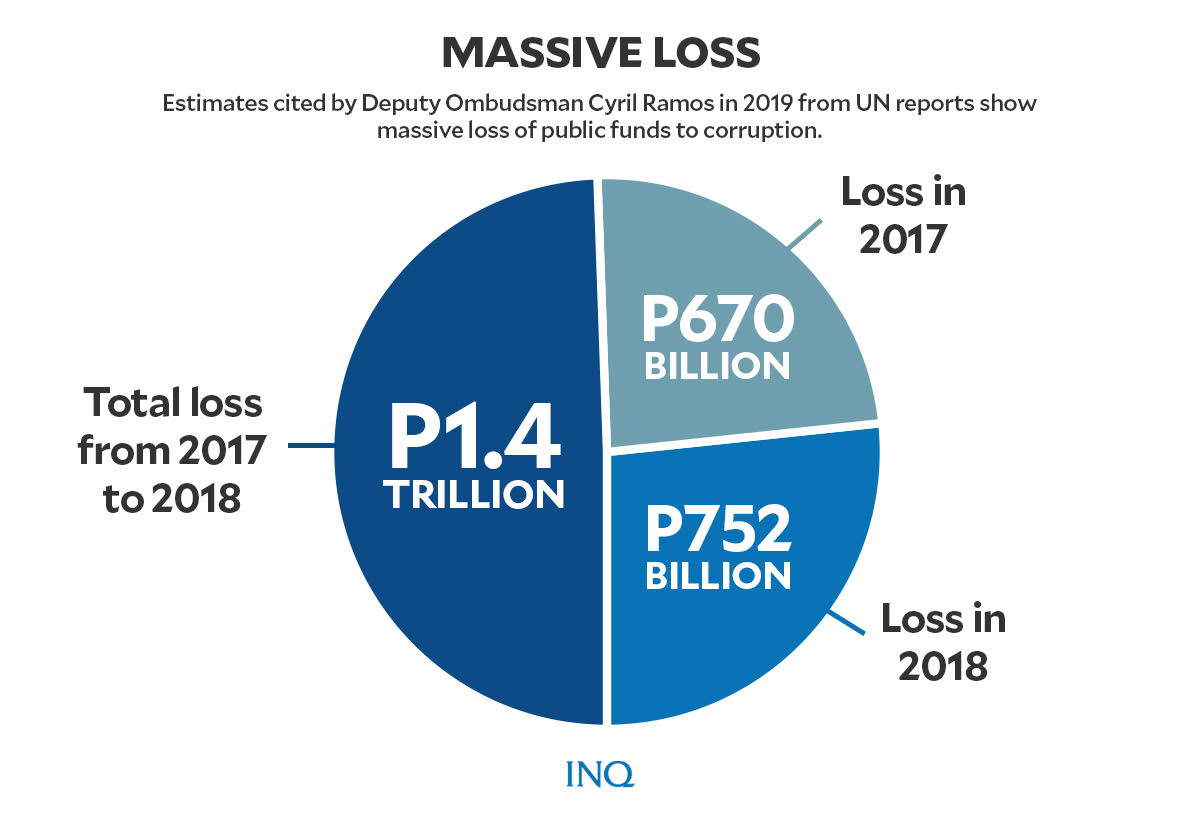 He explained that 20 percent of yearly government appropriations are being lost to corruption.

For 2022, an election year, the government is proposing P5.02 trillion in national budget. 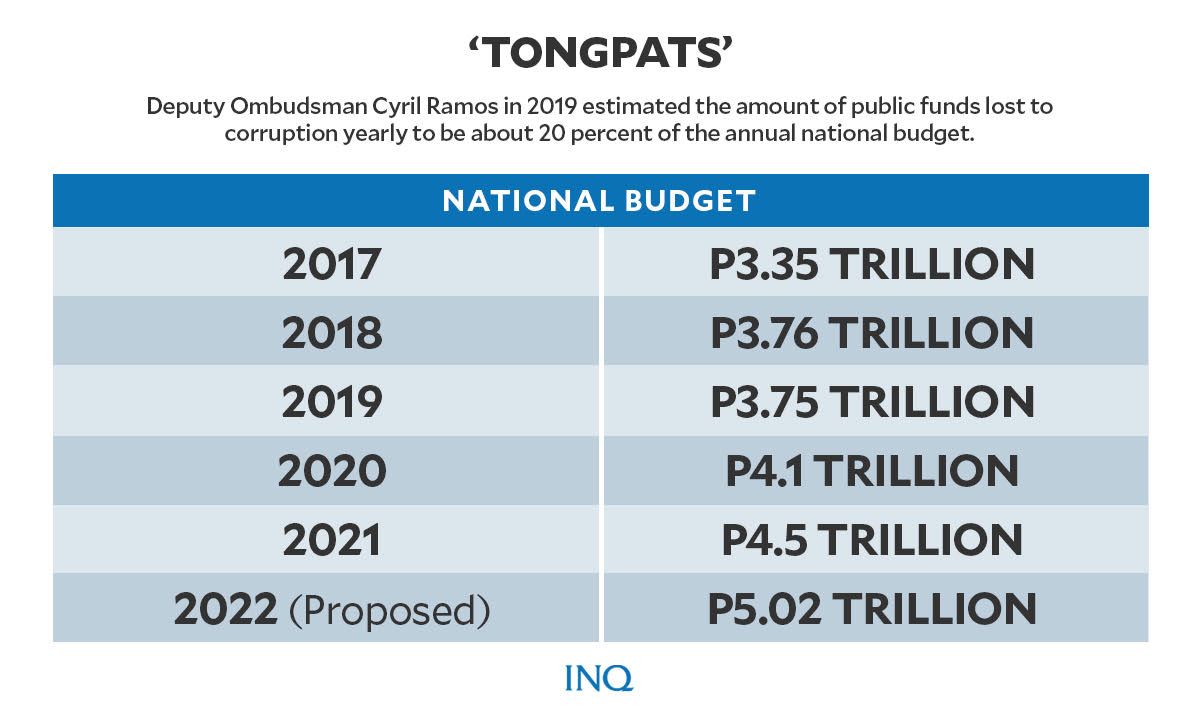 Ramos said the funds lost to corruption could have been used for the construction of 1.4 million houses for the poor.

“There are many more ‘what ifs’ on what can be spent for ₱700 billion annually: modern hospitals, airports, schools, irrigation facilities, better salaries, decent housing, armaments, and so on,” Ramos added.

“With a score of 34, efforts to control corruption in the Philippines mostly appear stagnant since 2012. The government’s response to COVID-19 has been characterized by abusive enforcement and major violations of human rights and media freedom,” TI said.

READ: ‘Not even a whiff of corruption’

Based on the CPI, corruption indicators pertain to “bribery; the diversion of public funds; the effective prosecution of corruption cases; adequate legal frameworks, access to information; and legal protections to whistleblowers, journalists and investigators.”

Ramos said in 2019, “We may never totally eradicate or defeat corruption in our lifetime. But if we can inspire and marshal the youth to join our duty in fighting corruption, and embrace it as their own, then we have won the war on corruption.”