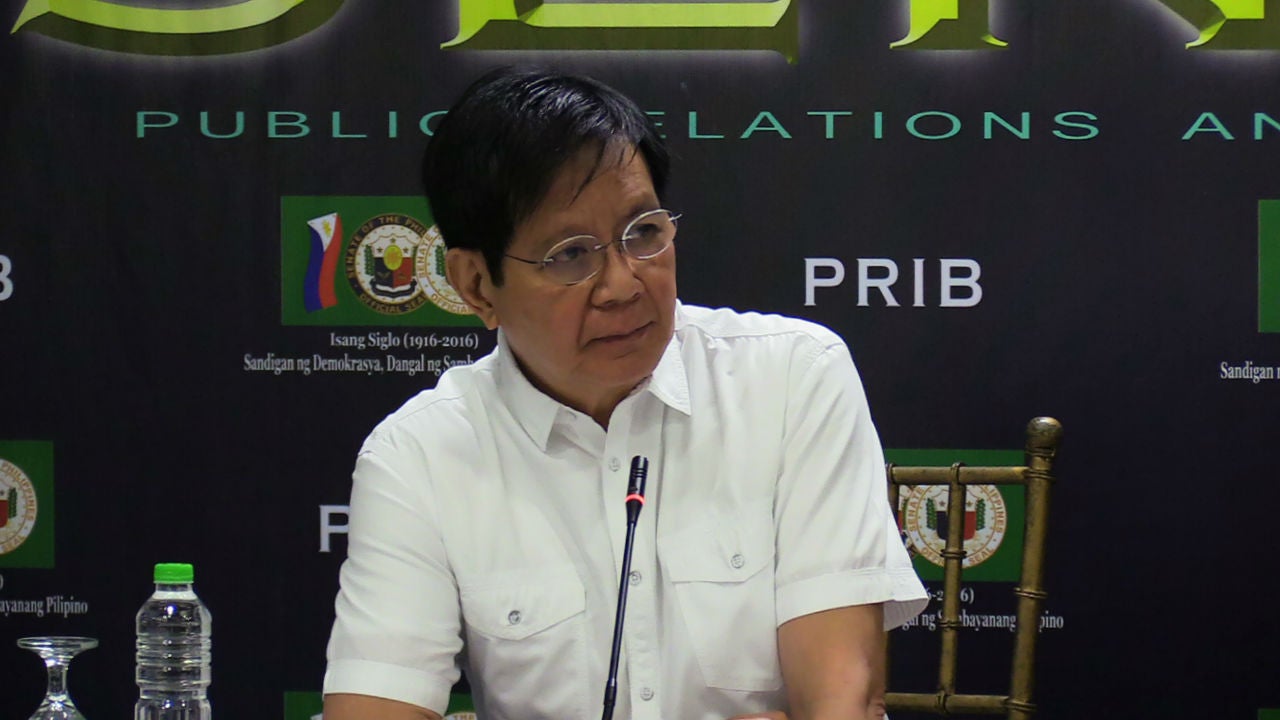 Out of every P100 Juan de la Cruz paid in taxes to run the government for a year, almost P20 went to projects that were later suspended, stopped or under litigation as these were found to be irregular, unnecessary, extravagant or unconscionable.

That’s the bane of Philippine government spending, as P583.5 billion had been “wasted” on discontinued or shelved projects as of December last year, according to Sen. Panfilo “Ping” Lacson.

In a roundtable discussion with Inquirer editors and reporters on Thursday, Lacson said an audit of government agencies showed the extent of wasteful and questionable spending practices that caused taxpayer money to go down the drain.

Lacson was referring to the Commission on Audit (COA) list of government projects issued “notices of suspensions, disallowances and charges,” which, as of the end of last year, had ballooned to nearly P600 billion.

“It is revolting in the sense that we keep paying taxes, then you see this is where our money goes,” he said.

“We’re either overtaxed or underserved, or both,” said Lacson, who opened a can of worms this month when he discussed last-minute insertions of multibillion-peso allocations for the districts of favored lawmakers in the proposed P3.8-trillion budget for 2019.

As of December 2017, the COA had suspended government transactions worth P402.8 billion, disallowed projects worth P20 billion, and issued notices to other projects worth P160.7 billion under litigation or “charged,” according to a list provided by Lacson’s staff and cross-checked by the Inquirer with official COA records.

“Now, we’re asking the COA to show who has the biggest disallowances and suspensions … so we can see which agencies are failing,” he said. 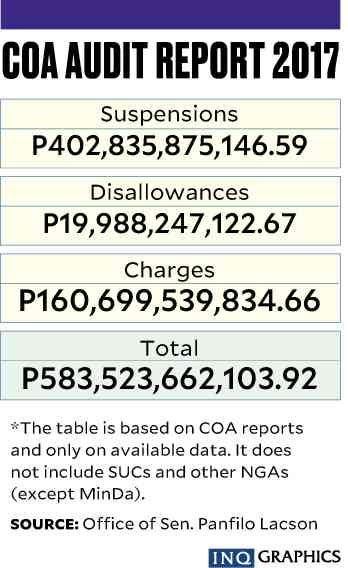 The Inquirer, independently checking the senator’s compilation with COA reports, found that two agencies accounted for the biggest slices of the pie of disallowed or suspended projects.

For instance, the Bureau of Customs (BOC) was No. 1 on the list, accounting for P392.8 billion of all disallowed, suspended or charged funds, representing more than two-thirds of the total.

No. 2 on the list was the Department of Energy (DOE), which registered P146.9 billion worth of suspended or stopped projects, or about a quarter of the total.

DOE’s notices of charges, however, accounted for the lion’s share of the P146.8 billion, owing to a suit filed in connection with the “undercollection” of the government’s 60-percent share of royalties from the Malampaya natural gas project, which resulted from the deduction of corporate income taxes of the service contractors.

As of the reporting date, an appeal is pending with the COA, according to records.

Altogether, the BOC and the DOE accounted for 92 percent of the total, by the Inquirer’s reckoning.

A far third on the list was the Department of Agriculture (DA) with P8.11 billion, followed by the general headquarters of the Armed Forces of the Philippines  with P6.46 billion.

Other agencies with sizable amounts were the Department of Public Works and Highways (DPWH) with P6 billion, Department of Education (DepEd) with P3.8 billion, and Department of Transportation (DOTr) with P2.12 billion.

Lacson said the figures did not yet reflect funds for state universities and colleges (SUCs), as well as other agencies whose audit had not been completed and released by the COA.

But the released figures paint a sorry picture for the government, he said.

“The assumption here is all this money went to waste because the project was disallowed or suspended or discontinued,” Lacson said.

“More or less you can draw your own conclusions,” he said.

In line with its constitutional mandate, the COA may issue notices to disallow, suspend or charge “irregular, unnecessary, excessive, extravagant or unconscionable expenditures or uses of government funds and properties.”

Notices of disallowance or charge are considered “audit decisions” that have been adequately established by evidence and supported by law and regulations, according to the COA’s 2009 revised rules of procedure.

Notices of suspension may be slapped on “transactions of doubtful legality/validity/propriety to obtain further explanation or documentation,” based on COA rules.

Lacson, aided by his researchers, arrived at the figures by compiling the COA’s 2017 reports on suspensions, disallowances and charges of individual government agencies.

The COA does not publicly release totals of suspended, disallowed or charged projects in the entire bureaucracy.

It releases individual reports of its audit of agencies every year.