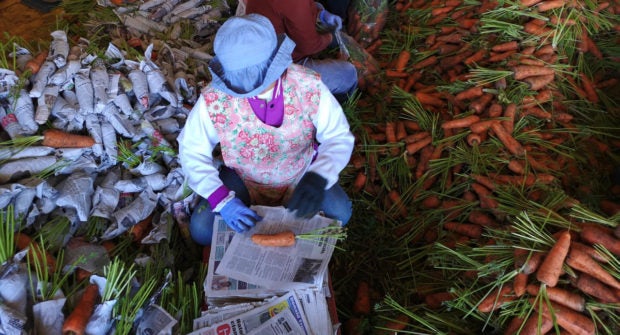 FILE PHOTO. A vegetable trader tends to her stall.

MANILA, Philippines—A law took effect in 2016 supposedly to promote Filipino farmers’ productivity and protect them against smuggling and importers.

However, five years since it was enacted, smuggling of vegetables continued to plague and flood Philippine markets to the detriment of Filipino farmers. 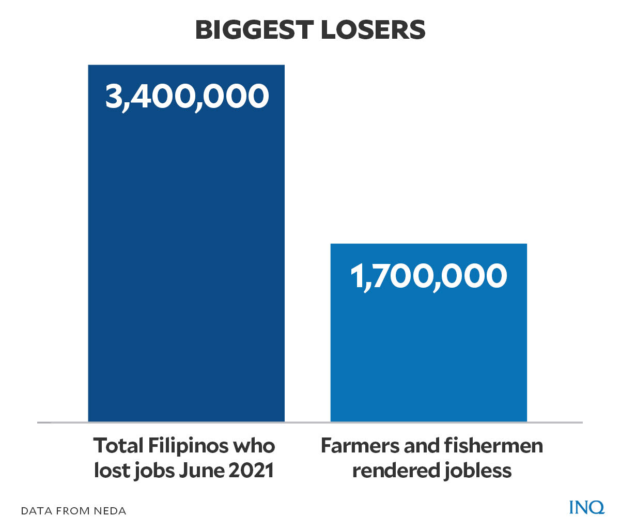 In Benguet, farmers have been complaining of a drastic cut in demand for their produce because of the proliferation of smuggled vegetables, including carrots, ginger and cabbage.

Last Sept. 29, the Bureau of Customs (BOC) discovered smuggled vegetables worth P4.75 million in Tondo, Manila. The vegetables were seized as the sellers failed to present importation documents.

Peasant leader Rafael Mariano, former agrarian reform secretary, said the government should be “vigilant and decisive in stopping” smuggling because of its impact on Filipino farmers.

The National Economic Development Authority said agricultural workers suffered the biggest job losses during pandemic lockdowns. Out of the 3.4 million Filipinos who lost their jobs in June this year, at least 1.7 million were farmers and fishermen.

In the five years since RA 10845 was enacted, the Philippines was witness to how agricultural products were being smuggled with impunity. In 2019, the BOC seized vegetables from China worth P53 million.

The Food and Fertilizer Technology Center for the Asian and Pacific Region (FFTC-AP) said smuggling has ill effects, including a slowdown in farm production and increase in income inequality.

From January to May 2021, the BOC filed 38 criminal cases against 144 respondents involved in smuggling and 23 administrative cases against BOC brokers. 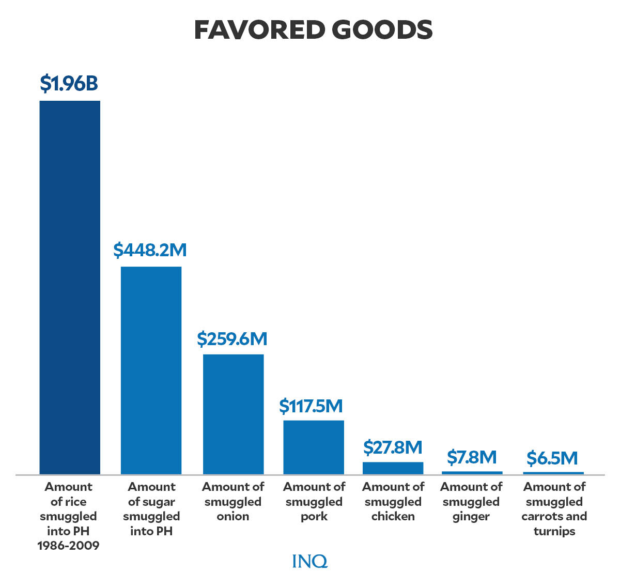 Mariano, one of the leaders of Kilusang Magbubukid ng Pilipinas (KMP), said defects in the law should be addressed.

Section 3 of the law stated that smuggling is considered economic sabotage if the smuggled products were worth at least P1 million. When it’s rice, it should be P10 million.

The law said economic sabotage is committed through any of the following acts:

• Using import permits of persons, natural or juridical, other than those specifically named in the permit

• Selling, lending, leasing, assigning, consenting or allowing to the use of import permits of corporations, non government organizations, associations, cooperatives, or single proprietorships by other persons

• Misclassification, undervaluation or misdeclaration upon the filing of import entry and revenue declaration with the BOC in order to evade the payment of rightful taxes and duties due to the government

• Acting as broker of the violating importer

Mariano told INQUIRER.net that when the value of smuggled products does not reach P1 million, it does not qualify for economic sabotage.

“Even if the law, especially the confiscation of those without import permits, can be easily implemented, if the value of the products did not reach P1 million, it will not be considered economic sabotage,” he said.

Mariano, however, asked: “What if the products were seen inside a warehouse? Even if there are no import permits, there is a need to identify who owns the illegally imported goods.”

A 2014 report by the Southeast Asian Regional Center for Graduate Study and Research in Agriculture said that from 1986 to 2009, the yearly value of smuggled agricultural products was $52 billion. 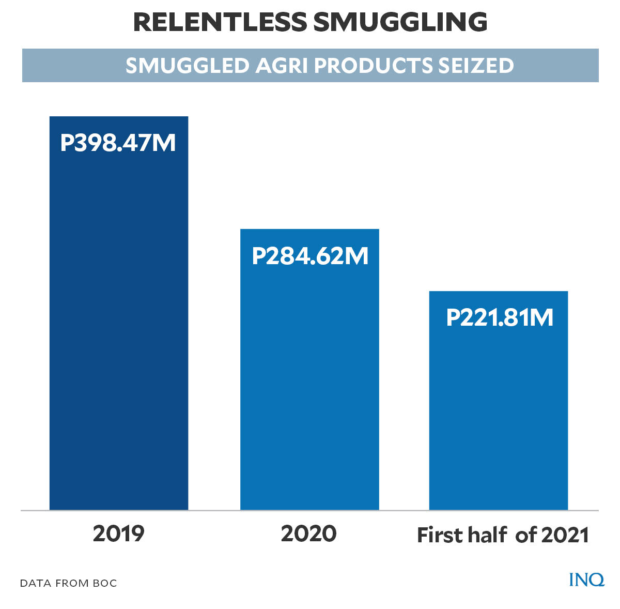 It said that one of the ill effects of smuggling was a decrease in government revenues because of “uncollected taxes and Customs duties”.

The FFTC-AP said from 2013 to 2014, the government of the Philippines incurred $1.64 billion in foregone revenues because of “pervasive illegal importation of agricultural products.”

Former congressman Romero Quimbo said in 2018 that this could have been used for the construction of approximately 21,000 classrooms or 2,600 health centers.

“In fact, the amount of loss reported for these two years is more than enough to cover the budget of the DA for 2016, and with an excess sufficient to help rehabilitate our agricultural sector,” he said.

For Mariano, the only way to end the illegal importation of farm products is this: “The government should help local farmers, especially in handling the costs of production.”

He said it was essential to lessen the cost of production so that when the price of agricultural products falls in the markets, it would not have a detrimental impact on Filipino farmers.

“The government should consider farmers as an essential productive force and treat agriculture as an important industry which is the foundation of the economy,” he said. 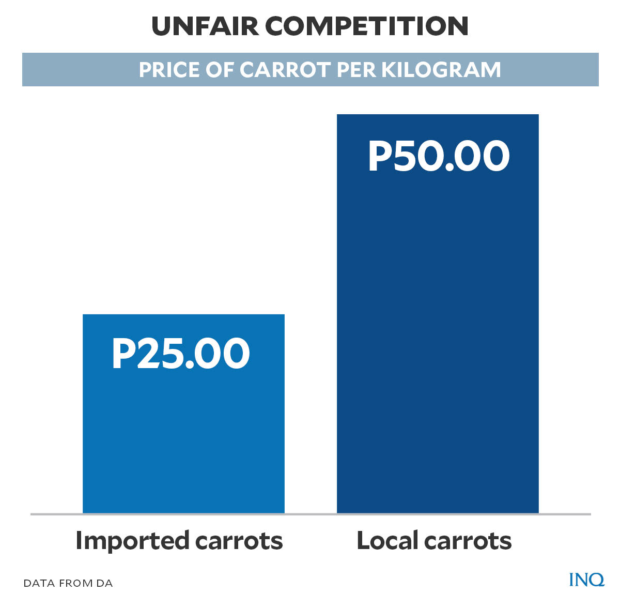 The FFTC-AP said agricultural growth and productivity are constrained by the high cost of production inputs, saying that fertilizers and pesticides typically account for 20 to 30 percent of farming costs.

Mariano said if the commercial price of “quality” local goods will decrease, smugglers will no longer be interested in transporting products to the Philippines.

Currently, the wholesale price of locally produced carrots is P50 a kilo while polished and imported carrots are P25 a kilo.

He also said that the BOC should also look for the “big” illegal importers, explaining that small players in the smuggling racket only distribute the products.

“The ones who must be urgently caught and penalized are those who facilitate the entry of huge volumes of smuggled vegetables,” he said.