LAWYER SAYS CONSEQUENTLY, THEY CAN'T BE REPLACED AS THEIR COCS ARE NULL AND VOID
By: Zacarian Sarao - @inquirerdotnet
INQUIRER.net / 05:41 PM October 05, 2021 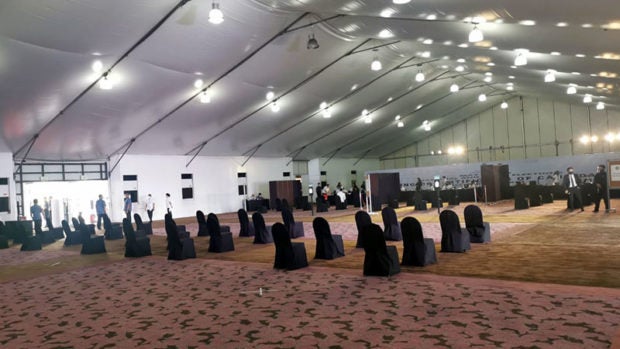 The Harbor Garden Tent at Sofitel hotel in Pasay City where aspirants for national posts in the 2022 elections will file their certificates of candidacy or COCs from October 1-8, 2021. INQUIRER.net/John Eric Mendoza

MANILA, Philippines — Aspirants for national posts who merely filed their certificate of candidacy (COC) for substitution should be declared a “nuisance candidate” and disqualified, said an election lawyer on Tuesday.

“Any person who files [COC] only for the purpose of reserving the position for another person or to withdraw his COC in favor of a substitute, should be declared a nuisance candidate and his COC will be canceled and denied due course,” said election lawyer Romulo Macalintal.

“His COC is null and void and therefore cannot be substituted,” he added.

According to Macalintal, this is stated under Section 69 of the Omnibus Election Code.

“He is just making a mockery of our election process. It does not matter if such person is rich or nominated by a political party, as long as it [could] be proven that he has no bonafide or [genuine] intention to run for such [office] or to merely reserve the position for another one, he can be declared as a nuisance bet,” the lawyer explained further.

If a petition to declare the filer a nuisance candidate is then filed, the candidate should not be allowed to withdraw, and likewise, cannot be substituted during the pendency of the petition, said Macalaintal.

“In a word, the COC [should] not be file[d] ‘for reservation purposes only’ but the one filing has the bonafide or genuine intention to run for such office,” said Macalintal.

“It is time that the provision of the law on substitution of candidates be properly applied and not be abused which can cause confusion among the voters or make a mockery of our electoral process,” he added.

Meanwhile, the Commission on Elections (Comelec) has set the deadline for substituting party-list nominees for the 2022 elections to November 15.

Only members of the same party can substitute for the withdrawing candidate.