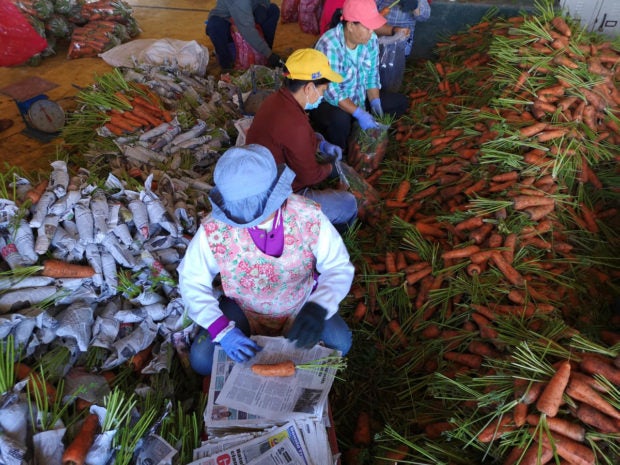 MANILA, Philippines — The Department of Agriculture (DA) will investigate the presence of cheap, imported carrots in local markets, which it says can only be smuggled as the government does not allow the importation of fresh vegetables, except when frozen and processed.

Assistant Agriculture Secretary Noel Reyes said at the televised Laging Handa briefing on Monday that a joint task force among the DA, the Department of Trade Industry, and the Bureau of Customs (BOC) and Bureau of Internal Revenue would investigate how the fresh carrots found their way to local markets, especially in Divisoria, Manila.

He warned that the smuggled agricultural products had not complied with food safety regulations and there was no telling if these still had pesticide residue.

The government will confiscate smuggled produce it sees and file cases against those who brought them into the country, Reyes said.

Benguet farmers earlier found evidence that imported crops were being sold in markets in the country even if there was no permit for their importation.

The cheap, imported carrots flooding the markets were from China.

This has alarmed local farmers as their livelihood is being adversely affected as orders for local produce have dropped drastically.

Rizal Rep. Fidel Nograles on Monday said the DA should act fast to immediately address the illegal importation of carrots.

“Our farmers are still reeling from the effects of low demand due to the pandemic-related economic slowdown, and then unfair competition suddenly slaps them,” Nograles said.

“This is too much for Philippine agriculture and we are hoping that the (DA) will act swiftly,” he added.

Lorna Menzi, a vegetable dealer from Benguet, had said that demand for carrots dwindled and farm gate prices declined due to the proliferation of smuggled produce.

Menzi added that farmers were also wary about reports that smuggled broccoli and cauliflower would be the next to flood local markets.

Nograles warned that if not resolved immediately, this would cause tons of local produce to rot.

“Our farmers have already tried to compete with the smuggled goods by lowering their margins but they can only do so much. The solution lies in how fast the government will be able to help them by stopping the influx of unfair competition,” he said.

Meanwhile, Reyes said the DA would provide assistance to backyard raisers following the drop in the farm gate prices of pork.

He said the backyard raisers will be given assistance for animal feed, which make up a big portion of their production cost.