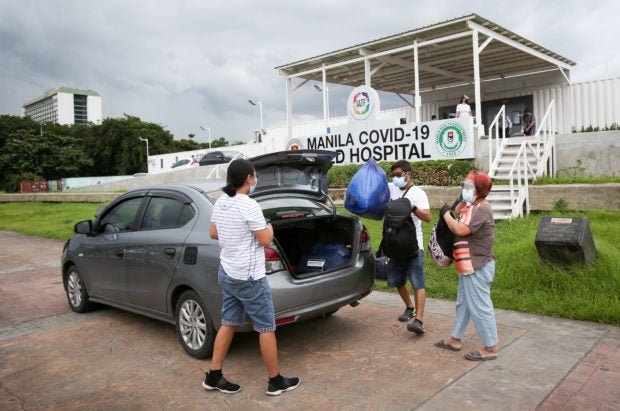 GOING HOME A couple load their belongings into a car as they leave Manila COVID-19 Field Hospital at Quirino Grandstand after completing their 14-day quarantine. —LYN RILLON

MANILA, Philippines — COVID-19 cases in Metro Manila have shown a “sudden downward trend” as reported cases decreased by 16 percent over the past two weeks, the Department of Health (DOH) said on Monday.

An average 4,347 new infections were reported daily during the past week, down from the 5,145 reported in the previous week.

The DOH, however, also pointed out that there were much less laboratory tests to report coronavirus cases, which may be the reason for their decline, the department said.

“The large decline in reported cases may have been largely affected by the rapid and large decline in RT-PCR (reverse transcription-polymerase chain reaction) laboratory output. Thus the need to interpret our case metrics carefully,” the DOH said in a statement.

It noted that daily cases detected in Metro Manila and in the national level are starting to slow down over the past days, based on the negative two-week growth rate and the decline in the reproduction number.

For the first time since Thursday last week, the DOH updated the COVID-19 death toll with 93 new fatalities, bringing the total count to 37,494.

A new quarantine system is currently in effect in Metro Manila after the government on Sept. 16 declared the capital region to be under general community quarantine (GCQ), with the COVID-19 situation determined by the DOH according to five different levels under GCQ, the most critical being alert level 5.

At the Laging Handa briefing, Abalos noted that “what is important here is … our Metro Manila residents are really cooperating, the people are being careful and our economy remains vibrant.”

He also said data from the DOH showed that more than 7 million, or around 72 percent, of the eligible population in Metro Manila had been vaccinated.

Furthermore, 1 million Metro Manila residents who have gotten their first dose of a COVID-19 vaccine are due to be inoculated by October, Abalos said, adding that the number of vaccinees in NCR will increase to about 82 percent.

“That 82 percent is not a joke, it’s a big thing. And once we reach December it will increase to 90 percent,” he said.

The eligible population is 9.8 million, or 70 percent, of NCR’s estimated 14 million residents.

Trade Secretary Ramon Lopez also said he looks forward to the alert level over the metropolis to be lowered by a notch, so that business establishments may be allowed higher venue capacities.

He noted criticisms regarding the 10-percent maximum capacity imposed on restaurants and personal care establishments.

“Many are saying they will lose profit and will not recover their investments. But more are saying that it’s better than closure, because they are still able to make sales and have something for the wages of their workers, who now are able to return to work after the resumption of operations,” Lopez said at presidential spokesperson Harry Roque’s press briefing.

Undersecretary Alethea De Guzman, in that same briefing, said the DOH would study the current indicators over the capital region such as the average daily attack rate, the hospital bed utilization rate and even the numbers on the vaccination rollout in the metropolis so far.

She cited, for instance, the still high level of hospital bed use, which she said the DOH must consider, among other indicators, before deciding any alert level change.

De Guzman said: “We have to be careful in our analysis, we are not looking in just one or two metrics. We have to have various metrics so that we have a bigger picture of the COVID-19 situation that we can give you.”