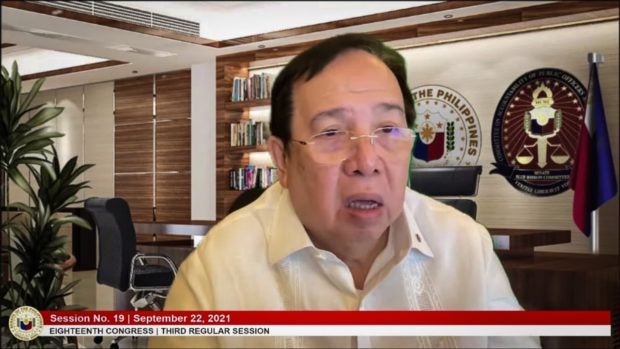 MANILA, Philippines — Pharmally Pharmaceutical Corp. official Krizle Mago was “never browbeaten” during the Senate inquiry into the firm’s dealings with the government, Senator Richard Gordon said, expressing relief that she is safe a week after breaking contact with the upper chamber.

(She admitted that they swindled the government, my voice was calm when I questioned her…she was never scared, she was never browbeaten.)

“Ang naba-browbeat yung mga nagsisinungaling [Only those who are lying get browbeaten],” he added.

Gordon said this after Mago resurfaced after the Senate blue ribbon committee could not reach her since her damning admission against Pharmally last week.

Mago earlier admitted in a hearing that Pharmally might have “swindled” the government by changing the expiration dates on the face shields it delivered.

According to Gordon, the Senate was keen on locating Mago over concerns for her safety.

“Marami siya nalalaman. Nagalala kami, hinanap namin siya. Ayokong may mangyari sa kanya [She knows a lot. We were concerned. I don’t want anything happening to her],” he said.

(Now, why did she go to the House? Because they are kinder there? I was kind to her. I did not do anything to her.)

A week after her last appearance before the Senate blue ribbon committee, Mago sought protective custody from the House of Representatives, saying this would help her to “speak freely without unnecessary compulsion from anyone.”

Asked about Mago being granted protective custody by the House, Senate President Vicente Sotto III said: “Very good. As long as she is safe.”

“Her testimony given in the Senate is more than enough. The people have heard her already. We were concerned for her safety,” Sotto said.

Should she be needed in succeeding blue ribbon committee hearings, Gordon said they can still invite Mago.

(We can invite her, if she won’t be allowed to testify in the Senate then that means the President’s allies are at work.)

Aglipay, who is leading a counterpart investigation in the House, said they can make arrangements should Gordon’s panel ask for Mago to testify in the upper chamber’s hearings.

During the course of the inquiry, senators have repeatedly questioned the Department of Health’s transfer of P42 billion to the Procurement Service of the Department of Budget and Management for the procurement of pandemic response supplies in 2020.

A portion of this amount went to over P8.6 billion worth of contracts awarded to Pharmally.

Senators doubted the financial capacity of the firm since it was only established in 2019 with a small capital of P625,000 when it secured the supply deals.