This was how the government describes health care workers who are laying lives on the line at the frontline of the continuing battle against COVID-19.

But a group of nurses said the treatment that health care workers were getting from the government was not one that is fit for heroes.

The group cited as example the proposal of the Department of Health (DOH) to give a “singular” package of benefits to health workers on top of their regular pay.

The DOH proposal would provide additional benefits to health care workers ranging from P3,000 to P9,000.

Maristela Abenojar, who heads FNU, said the proposal mirrored the governments’ “little regard for the selfless work and sacrifice exerted by health care workers” during the pandemic. 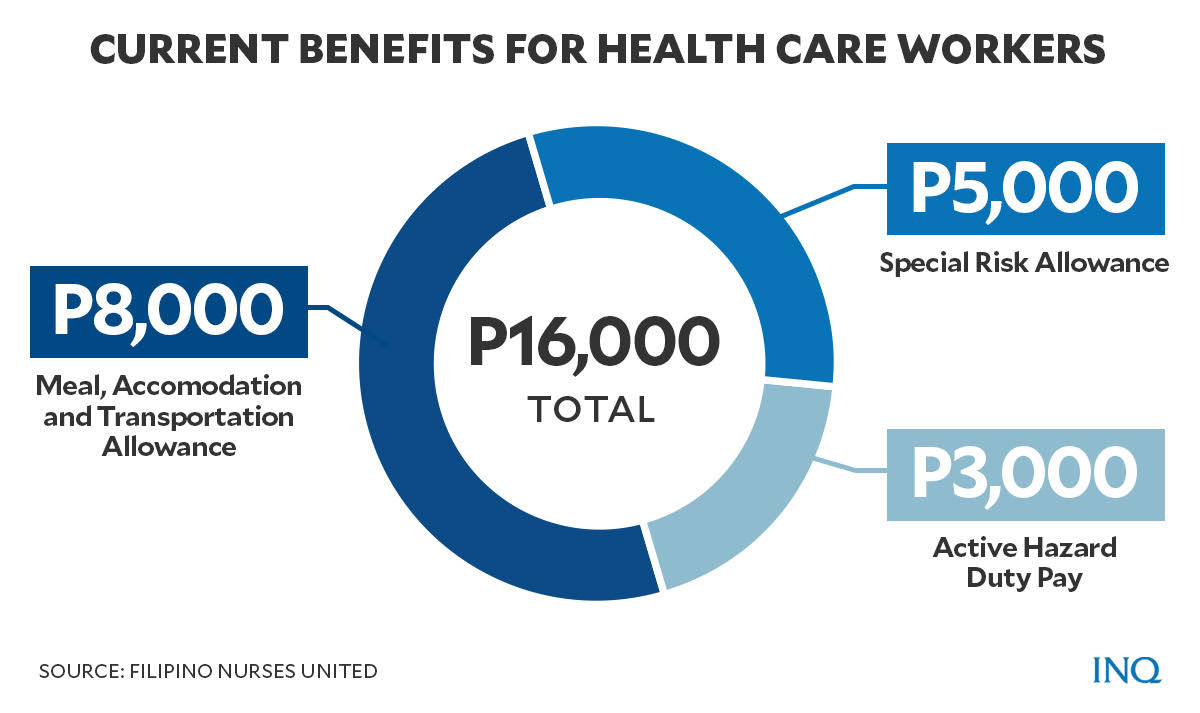 FNU said the proposal will “effectively” cut the existing benefits of health care workers, saying that the current package is worth P16,000: 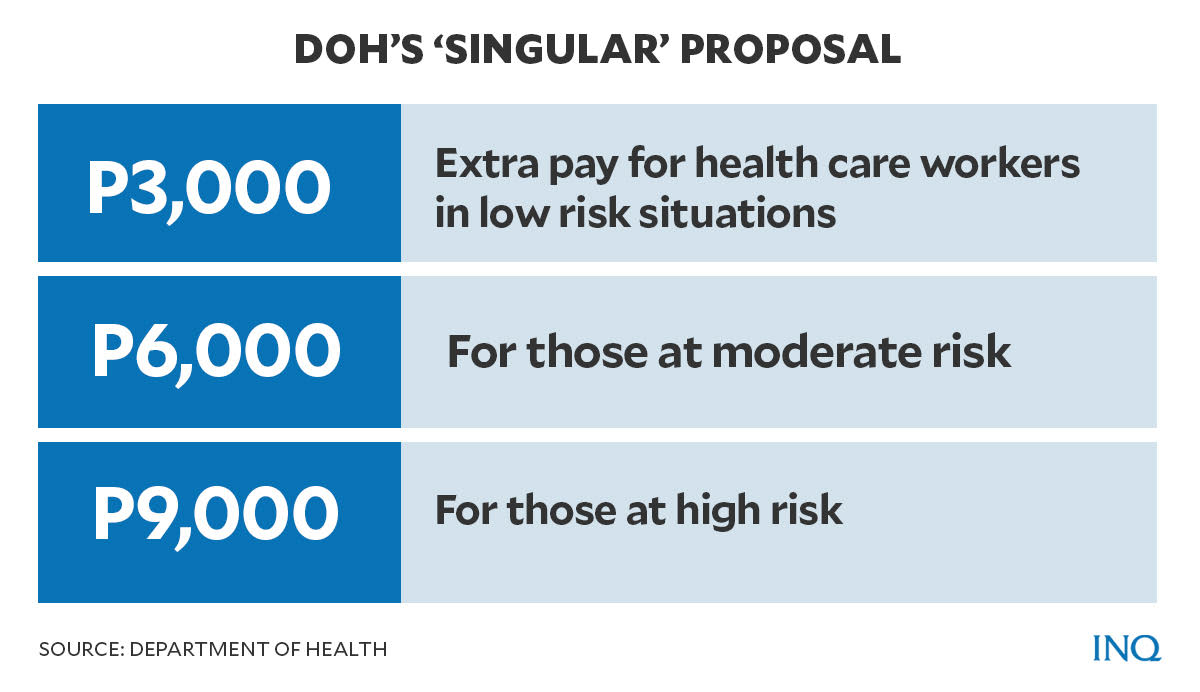 With the “One COVID-19 Allowance”, the benefits listed in Senate Bill No. 2371—the proposed COVID-19 Benefits for Healthcare Workers Act of 2021—will be consolidated in a single allowance with risk exposures as basis:

According to Duque, the allowance is “awarded in full if the health care worker physically reports at least 14 days in a month.” If not, however, the allowance would be “prorated”.

Nurse Dennick John Salvador said the proposal was unfair because “when someone enters a health care facility, the risk is immediately high. COVID-19 is everywhere.”

In December 2020, the World Health Organization (WHO) called for the protection of health workers against COVID-19 because they “play a vital role in keeping others safe, relieving suffering and saving lives.”

A nurse for a government hospital for 12 years, Salvador told INQUIRER.net that while he was assigned to a non-COVID ward, “there is still a possibility that patients I am interacting with will later test positive.”

Last Sept. 19, the DOH said 24,895 medical workers in the Philippines have contracted the disease since the beginning of the health crisis— 24,357 have recovered, 105 have died and 433 were active cases. 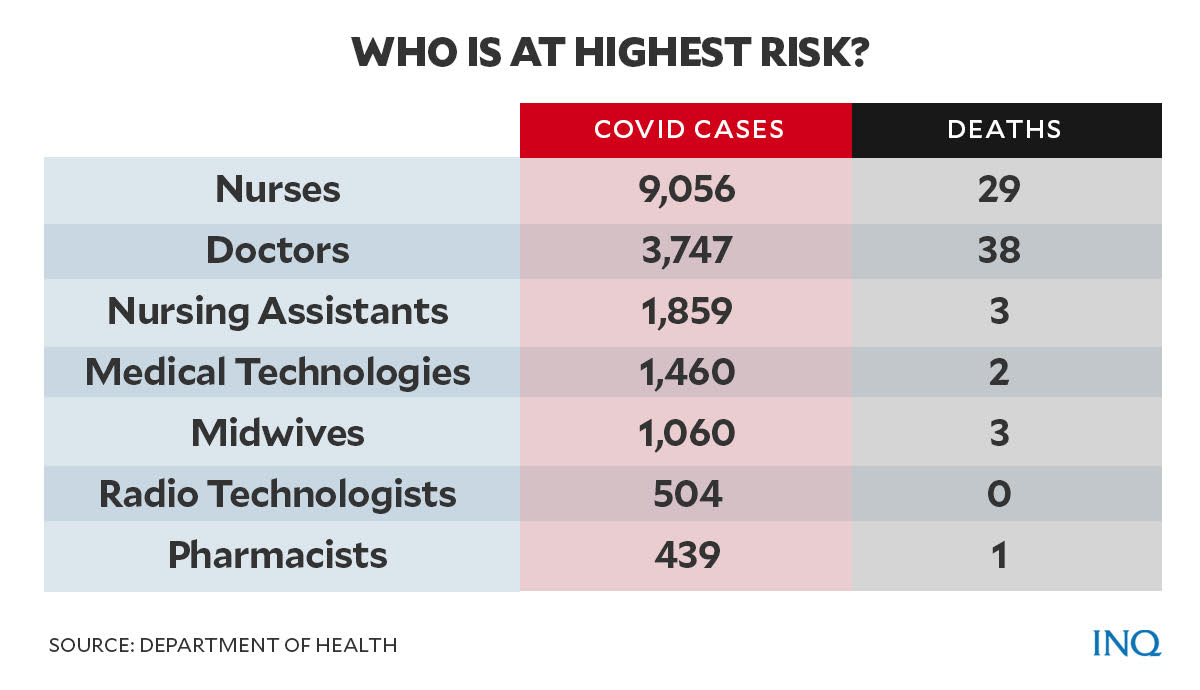 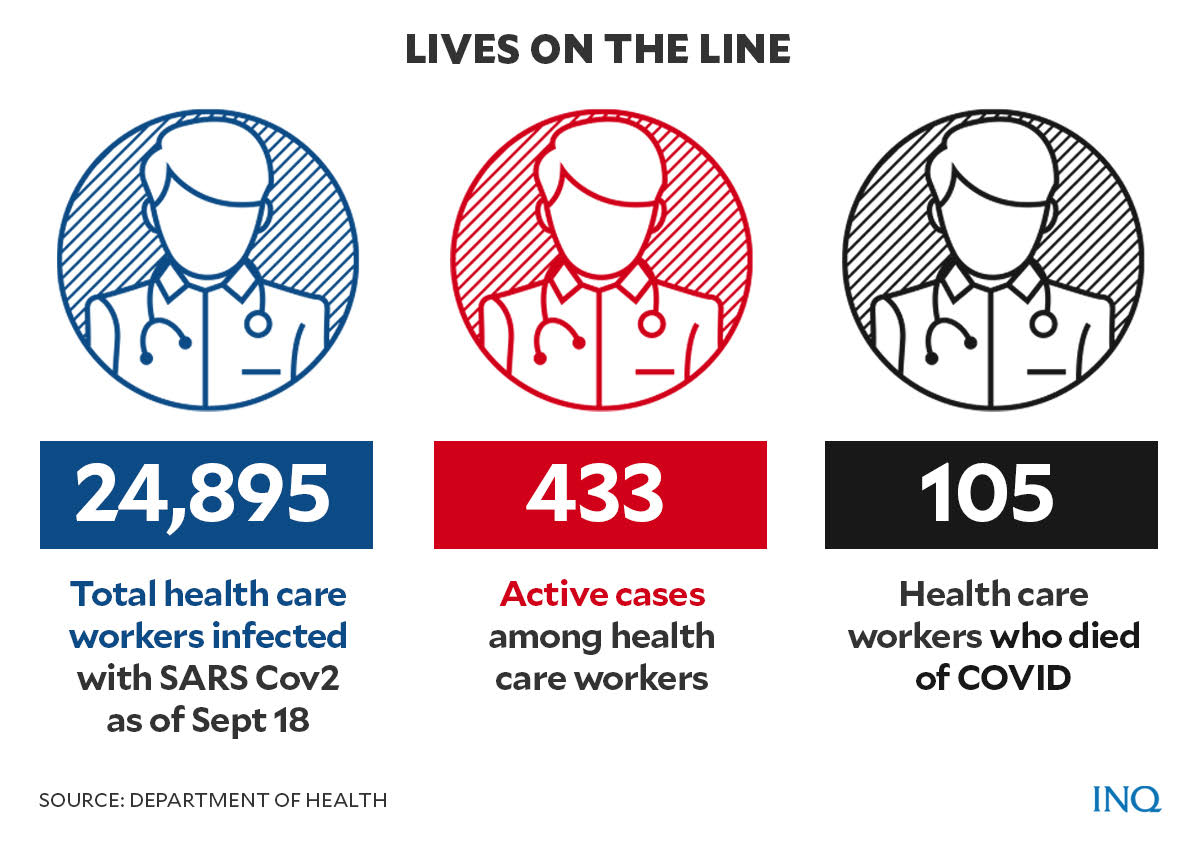 For non-medical workers, the data showed that there were 765 cases and five deaths among barangay health workers; 641 cases and seven deaths among administrative staffers; 259 cases and two deaths among utility workers and 177 cases and no death among social workers.

Sen. Joel Villanueva, chair of the Senate labor committee, took the Senate floor to express support for a bill that would make SRA and other benefits a permanent part of health care workers’ compensation package.

“We can’t deny the immeasurable sacrifices made by our health care workers,” Villanueva said in a speech.

The bill endorsed by Villanueva was the one involved in the DOH proposal for a “singular” package of benefits.

“We can shower our health care workers with words of affirmation, praises, admiration,” Villanueva said. “But action speaks louder than words,” the senator added.

“With concrete action, we need to respond to the sacrifices of our health care workers,” Villanueva said.

Last Friday (Sept. 24), Villanueva proposed to expand the scope of the bill to include non-medical workers, saying that they are also at risk.

He said it was also not enough for health workers to get additional benefits but that they get it on time. By institutionalizing the benefits, Villanueva said “we are giving a more appropriate and dignified salute to our pandemic heroes.”

The DOH said 567,727 health care workers will be considered as recipients of the One COVID-19 Allowance but FNU said this was only 31.5 percent of 1.8 million medical workers in the Philippines.

FNU said it would be an injustice for other health care workers not listed as recipients to exclude them from the benefits. Even workers who are not directly performing COVID tasks are getting sick, FNU said.

It was estimated that at least P50.4 billion was needed to finance the DOH’s One COVID-19 Allowance plan for 567,727 medical workers, with 6 percent of them at low risk, 7 percent at moderate risk and 67 percent at high risk.

The Department of Budget and Management (DBM), however, gave only a P19.68 billion budget for that purpose to the DOH for 2022, far from the P73.99 billion proposed by the DOH.

Duque had said the cut would have an impact on allocations for health care worker benefits in 2022.

READ: Nurses start countdown to 10-day deadline for their benefits

It said P570 million worth of checks was released for the compensation of 32,281 health care workers who contracted COVID-19 and those who died of the disease.

On June 4, 2020, the DOH, Department of Labor and Employment and the DBM released the implementing guidelines for the grant of compensation of public and private health care workers.