Nurses start countdown to 10-day deadline for their benefits 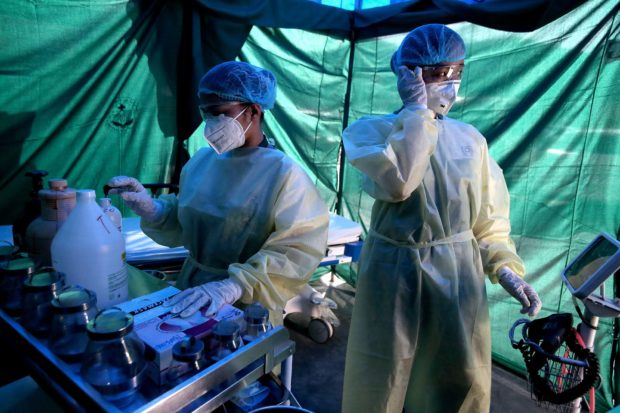 MANILA, Philippines—Trust in the government’s promises is eroding among nurses belonging to a group that has been keeping tabs on the delivery of benefits that had been dangled to show nurses that authorities cared for them.

But as the Department of Health (DOH) failed to give health professionals the benefits that the leader of Filipino Nurses United (FNU) said were deserved, the officials who keep promising to give better treatment to those risking their lives to fight COVID have been “losing credence.”

“It seems that health workers no longer trust the government because after a long year, it did not give the benefits all of us deserve,” said Jocelyn Andamo, FNU secretary general.

This was the reason that Andamo said her group was skeptical about reports that President Rodrigo Duterte had given the DOH and Department of Budget and Management (DBM) a 10-day deadline to release the benefits that are due health care workers who are on the frontline of the battle against COVID.

To health workers “complaining about their allowances,” Duterte said, “I am now ordering, this is an order, Secretary Duque: Pay them. Use whatever money there is.”

Last Monday (Aug. 23), FNU started its 10-day countdown, saying that by Sept. 1, the government must have already started a review of the list of health workers who should receive the benefits. 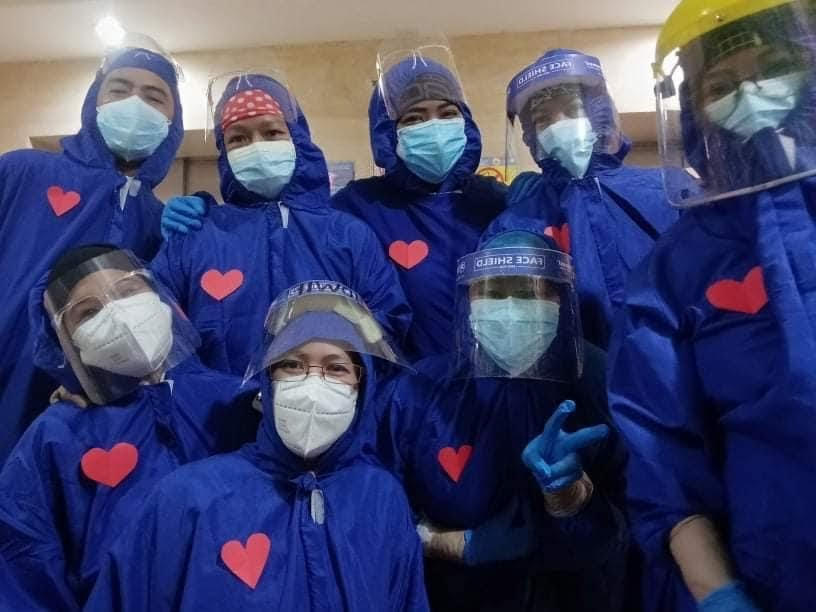 Wearing personal protective equipment, health workers in Pasig City show “hearts” as they start the 10-day countdown for benefits from the government. PHOTO FROM NICOLITO OBA

“The benefits for us, health workers, did not reach us. We need to do the countdown to let the government know that we are vigilant,” Andamo said.

Republic Act 11494, or the Bayanihan to Recover as One Act, signed by Duterte on Sept. 11, 2020, provides the following benefits to public and private health care workers in the Philippines:

Section 21 of Republic Act 7305, or the Magna Carta for Public Health Workers, also provides that health workers in government institutions should be compensated with a “hazard allowance”—or 25 percent of the monthly basic salary of those receiving salary grade 19 and below and 5 percent for those with salary grade 20 and above. 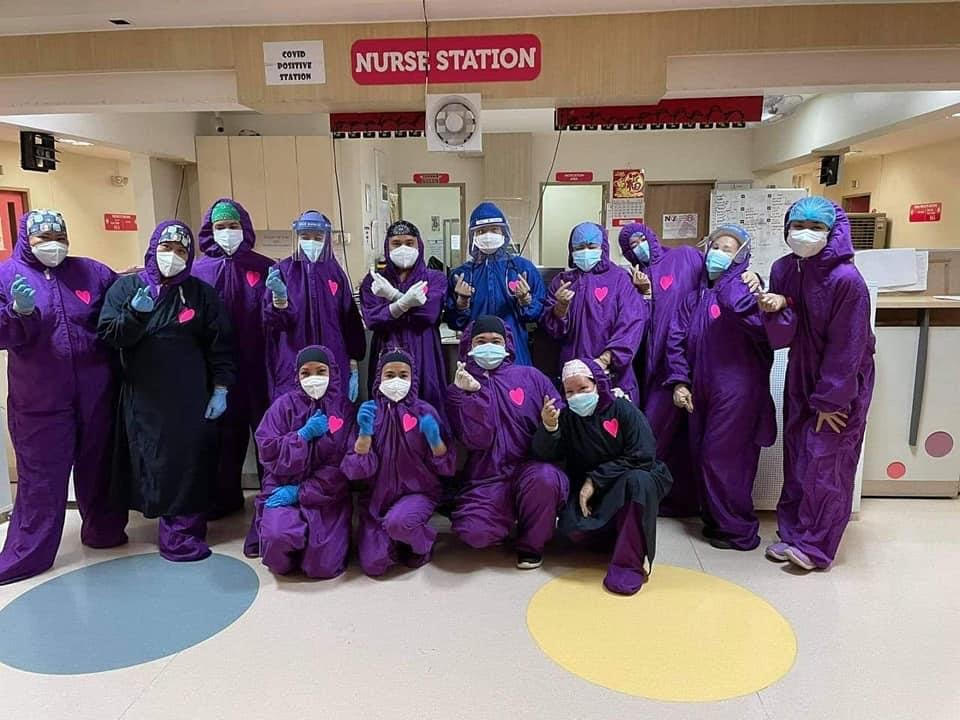 Health workers in Pasig City start the 10-day countdown to call for benefits from the government. PHOTO FROM NICOLITO OBA 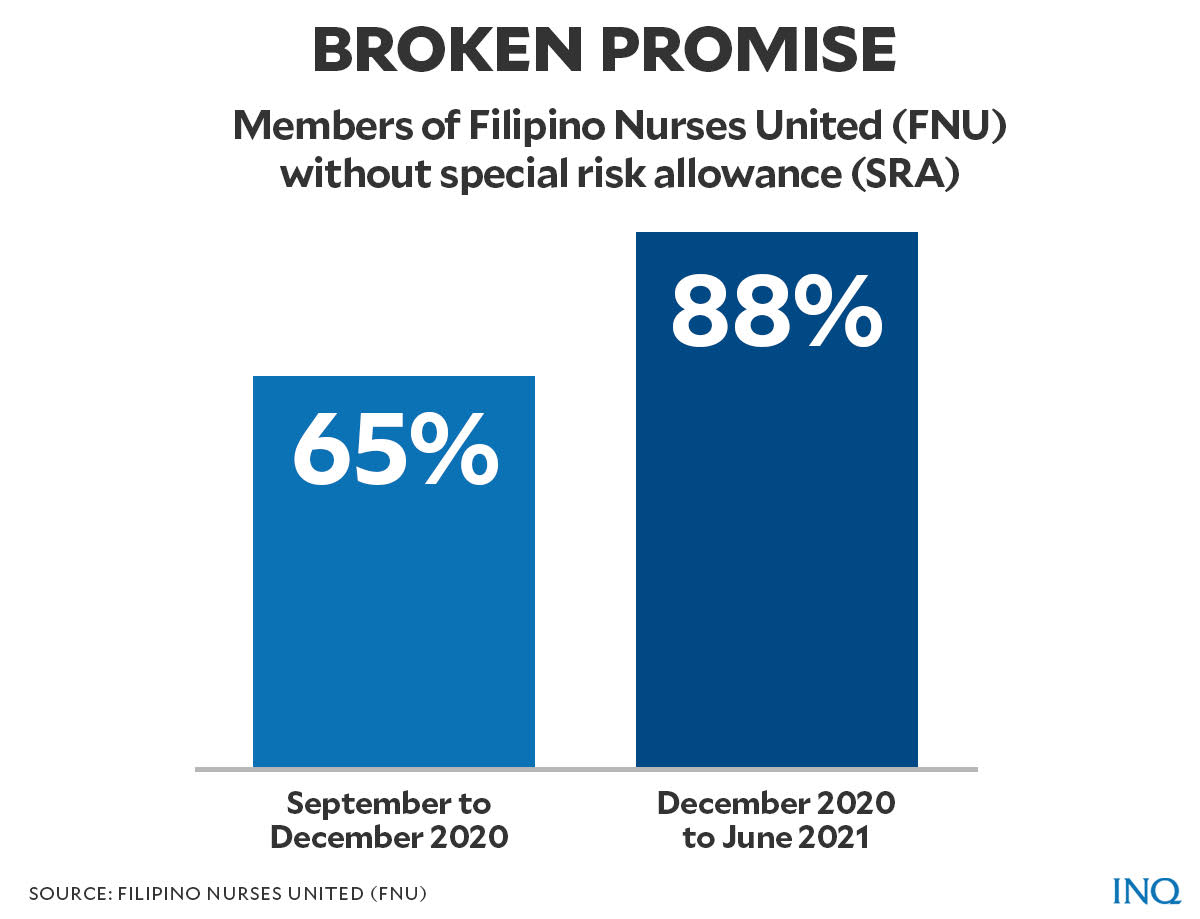 According to FNU data, health workers from the following institutions have not received SRA since September 2020: 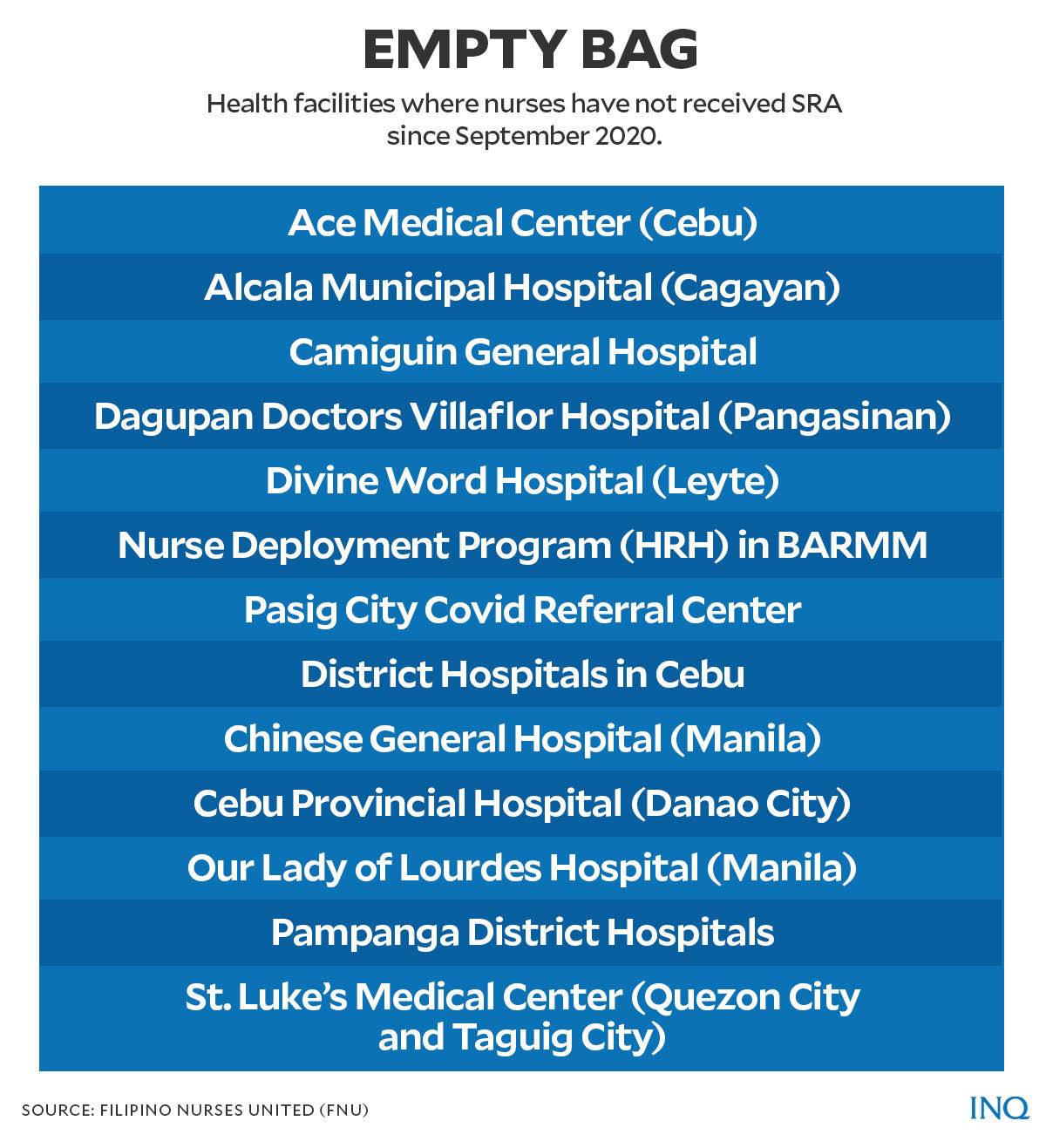 The medical workers in the following health care facilities have not received SRA since December 2020 to June 2021:

Health workers in the following institutions, likewise, have not received SRA:

FNU said that at the Metropolitan Medical Center (Manila), only 304 out of 1,300 health workers have received SRA. In San Lazaro Hospital (Manila), some medical workers are still waiting for January to June 2021 SRA.

In an interview with INQUIRER.net, Nicolito Oba, a nurse, said that he received SRA, but got only half of what he had expected because of Joint Circular No. 1-2021 issued by the DOH and DBM.

“If I had this instance here in Metro Manila, I’m certain that health workers in local government institutions are experiencing greater struggles regarding SRA,” he said.

For Andamo, FNU has to be vigilant to prompt the government to commit to its promise, saying that “if we will wait for 10 days without letting them know that we are watching them, it’s possible that the government, once again, will ditch our cry for benefits.”

“We deserve it because we’re risking our lives to serve,” she said.

The DOH and DBM said that allowances, not exceeding P5,000 a month, will be given to “public and private health workers who directly cater to or [are] in contact with COVID-19 patients.”

However, Andamo said that the provision is in no way acceptable because all health workers, “once they enter the hospital, are already at risk from getting infected.”

“We ask that all health workers, not only those directly exposed to COVID-19 patients, should be given SRA,” she said.

Andamo also told INQUIRER.net that the government should really provide P5,000 SRA, saying that in reality, those who received SRA did not get P5,000.

She said P5,000 was the highest SRA that a health worker can receive but only for 22 days of work which Andamo said was not possible because health workers needed to be on quarantine after being exposed to COVID patients.

With the health crisis, a medical worker only works for 14 to 16 days a month. Andamo said that the SRA is computed as follows:

Where did resources go?

To provide SRA for health workers, the DOH will use its P311 million “contingency fund,” but Andamo said it was “concerning.”

“Why would the DOH use its contingency fund when it has allocations for the SRA?” she said.

She said the DOH has P59 billion worth of “unspent funds” from the 2020 budget, citing data from the Commission on Audit.

Earlier, health workers’ groups criticized the DOH for the “unspent funds,” saying that it would have helped medical workers who are risking their lives to serve COVID-19 patients while struggling with finances themselves. 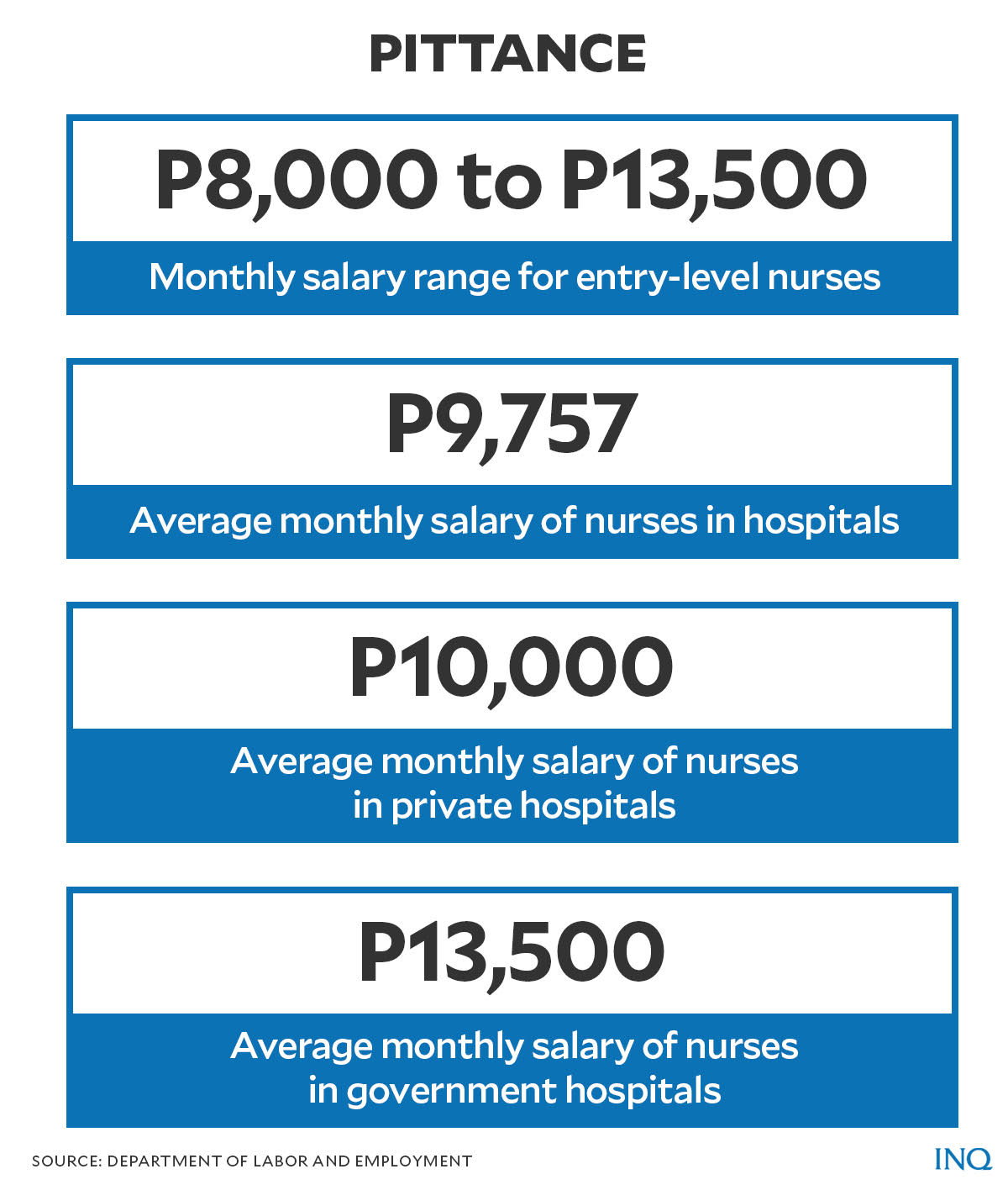 In the Philippines, data from the Department of Labor and Employment showed that the average salary for an entry-level registered nurse is P8,000 to P13,500.

Registered nurses working in hospitals commonly receive an average salary of P9,757. In the government it is P13,500 while in the private sector it is P10,000.

“Second year into the pandemic, the same nightmarish scenario is repeated: a surge in COVID with record-number of cases; a weighed down health system reaching over-capacity and a health workforce near breaking point due to fatigue and exhaustion while facing extreme risks to both life and safety,” FNU said.