Scientists race to save Florida coral reef from mysterious disease 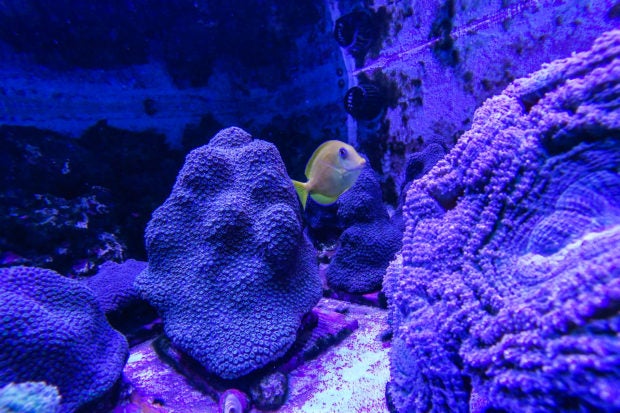 ORLANDO — At a laboratory in central Florida, biologist Aaron Gavin uses tiny pipettes to carefully feed shrimp to more than 700 corals living in huge saltwater tanks, with sunlight-mimicking lamps glowing above them.

The work of the scientists here could be the last chance to save the species that make up the only coral reef in the United States’ continental waters.

Gavin and his team have diligently recreated the coral reef habitat found in the waters off the southern tip of the state, complete with artificial currents and local fish.

They hope to prevent the 18 species of coral in their care from suffering the same mysterious ailment, called SCTLD (stony coral tissue loss disease), that is afflicting their wild cousins.

Among the sprawling mangroves and darting schools of fish off the Florida Keys, the damaged corals — normally dark — now appear as large white patches on the floor of the Atlantic Ocean.

The situation is the same all along the Florida Reef Tract, which stretches 360 miles (580 kilometers) from the Dry Tortugas, which are the westernmost islands in the Florida Keys, all the way to the town of St Lucie, located about 120 miles north of Miami.

“It’s heartbreaking, and I think the most alarming (thing) about it is that most people don’t know it’s happening,” said Michelle Ashton, the communications director of the Fish and Wildlife Foundation of Florida.

What Gavin and his colleagues discover at the Florida Coral Rescue Center could change the future of the state’s marine ecosystems.

“We are holding the corals safely and healthy in our care,” explained Justin Zimmerman, the director of the Orlando-based lab, which opened in 2020 and is managed by aquatic theme park company SeaWorld.

“If they were still in the wild, up to 90 percent of them would have been dead,” Zimmerman said.

The potentially catastrophic SCTLD was first discovered in 2014, near Miami, and has continued to spread rapidly, killing about half of stony coral species, a cornerstone of marine biodiversity.

The disease, whose causes are unknown, is now plaguing the animals further into the Caribbean, all the way in Mexico and Belize.

The rescue lab’s work is part of a project created in 2018 by the National Oceanic and Atmospheric Association and the Florida Fish and Wildlife Conservation Commission, and includes dozens of public and private organizations.

The group, faced with the threat of more than 20 of the 45 species of hard corals in the area going extinct, devised the unprecedented plan to extract healthy corals from the region’s waters and care for them in these artificially equipped aquariums in the hope they can be returned to their wild habitats in the future.

“You are looking at the future of Florida Reef Tract in this room,” Aston said of the corals in the Orlando aquariums. “And their grandchildren will be what goes back out to the water.”

Return to the sea

The first part of the rescue plan has allowed wildlife authorities to save nearly 2,000 colonies of corals, now stored at more than 20 institutions in 14 different states.

The second part of the plan requires researchers to successfully return the corals to the ocean — though such an operation would likely take place a long time from now, as corals reproduce very slowly.

The scientists are studying the genetics of the rescued animals in an effort to cultivate new specimens that could be more resistant to disease, as well as other threats such as warming water temperatures and pollution.

The success or failure of these endeavors could have huge consequences for the region.

Stony corals, made up of limestone skeletons, are what create coral reefs, which in turn provide a home for a quarter of marine life.

Plus, the structures are natural barriers between the open ocean and land, reducing the strength of waves that hit the coastline, especially during hurricanes and other storms.

And a hit to coral health could mean a hit to Florida tourism revenue, as one study estimated that visitors drawn to the state for fishing and diving along the reef generate $8.5 billion.

Key Largo resident Steve Campbell, 59, is worried about what comes next. He is sitting next to the small tourist boat he captains, currently anchored in the port.

He said the coral disease has already had an impact on his business.

“I’ve been in the Florida Keys now for 20 years, and I’m out on the water every day,” he said.

“Obviously we make our living out here, so we take people out to the reef for the enjoyment of seeing the reef.”

“So for us it’s extremely important.”