SWS: 75% of Filipinos back single 6-year term limit for president 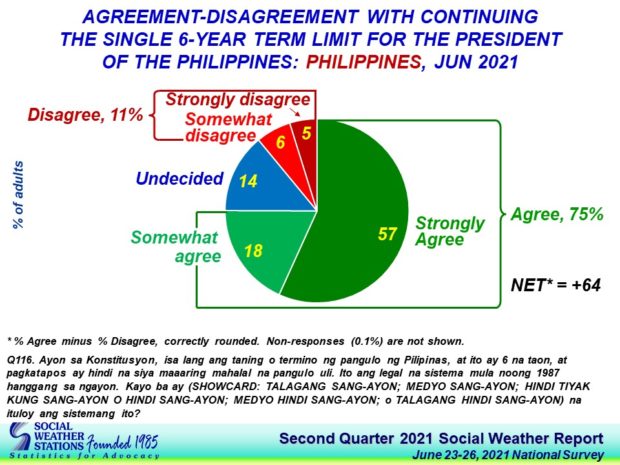 MANILA, Philippines — Majority of Filipinos believe that the country’s president should only serve a single six-year term as stated under the 1987 Constitution, results of a Social Weather Stations (SWS) survey released Wednesday showed.

The SWS noted a “very strong” consensus on the prevailing term limit of six years in all areas.

Meanwhile, the SWS said those who disagreed with the current term limit under the Constitution proposed “an average of 7.1 years, while their proposed number of terms was an average of 2.1.”

Respondents from Metro Manila who disagreed with the current term limit recommended an average of 8 years per term, 7.7 years in Balance Luzon, 6.5 years in Mindanao, and 5.4 years in the Visayas.

The recommended number of terms was an average of 2.4 in Mindanao, 2.3 in Metro Manila, 2 in the Visayas, and 1.8 in Balance Luzon. 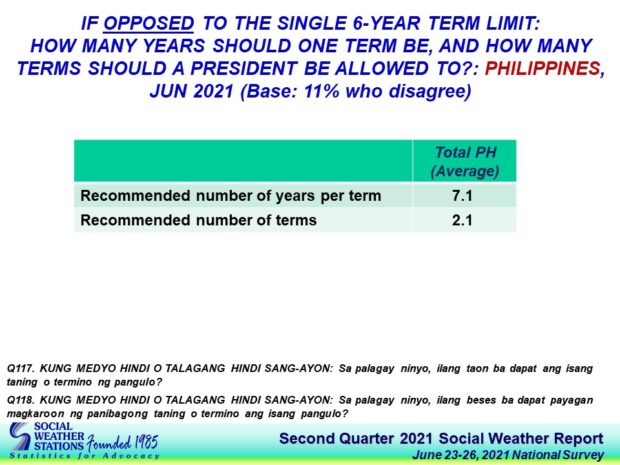 Further, the SWS also found a “very strong” net support for the prevailing term limit of a president regardless of opinion about the supposed vice presidential bid of President Rodrigo Duterte in the 2022 national elections.

Duterte’s plan to run for vice president next year would violate the Constitution, some 60 percent of adult Filipinos surveyed think.

It was also found there is higher net support for the current term limit “among those very dissatisfied” with the President’s performance.

SWS said the polling it conducted through face-to-face interviews was “non-commissioned” and that the survey’s sampling error has a margin of ±3% for national percentages and ±6% for Metro Manila, Balance Luzon, the Visayas, and Mindanao.