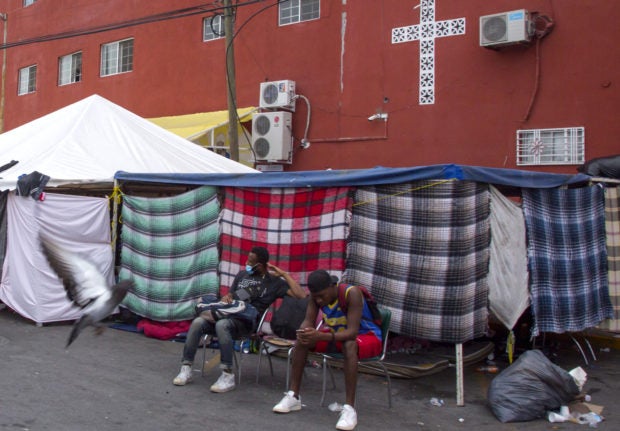 Haitian migrants remain outside a shelter as they awaits for their immigration resolution in Monterrey, Mexico, on September 28, 2021. AFP

CIUDAD ACUNA, Mexico — The American dream is fading for Haitian migrants confronted with the harsh reality at the US border with Mexico, where some are considering staying and getting a job to survive instead.

“I’m not in a hurry to enter the United States. If I find an opportunity, yes, but if I can’t, I’m not going to risk crossing there,” said 29-year-old mother Yslande Saint Ange.

“If I can’t, and the Mexican authorities can help us with papers to be allowed to look for a job, rent a room, then we can stay with no worries,” she added.

In the park in Ciudad Acuna where they have set up a makeshift camp, men and women gathered discussing what to do given the deportations of Haitians who crossed the Rio Grande river to the US side.

They were still recovering from the fright caused by the sudden arrival of dozens of Mexican police officers before dawn on Thursday, in what initially appeared to be a massive raid.

“I got up running and told my husband to run because the migration authorities are going to take us,” Saint Ange said.

Mexican immigration officials then entered the camp to announce that the operation was to “protect” the migrants and “invite” them to return to the southern city of Tapachula while their refugee applications are processed.

Tapachula, located near the border with Guatemala, is already crammed with tens of thousands of Central Americans and Haitians, and returning is not an appealing prospect.

“If I go to Tapachula, what can I do? I left my country four years ago… I have nothing — nothing!” said Hollando Altidor, 25.

“Tapachula looks like hell for us, with deportation in the future too,” added a young man sitting next to Altidor who did not want to give his name.

Marc Desilhomme, 29, said he was ready to stay in Mexico if he can send money to his daughter who lives in Chile.

“For now, I don’t have anything. I don’t have money and I have a girl to help. Before that, I need papers to work, because you know that migration hassles you if you don’t have papers,” he said.

‘Left in a hurry’

The situation is more urgent for people traveling with children.

When the police arrived, Etlover Doriscar grabbed his son and wife by the hand and fled with just the clothes on his back, fearing that they would be detained.

“You can never fight with the police or immigration. They know what they can do with us and there’s nothing we can do,” the 32-year-old said.

Attempting to cross into the United States and risk deportation back to his country is out of the question for Doriscar.

Nor does he plan to return to Brazil, where he worked for seven years as an Uber driver — a job that he said did not pay enough to support his family.

By Friday morning, the number of migrants camped in the park in Ciudad Acuna had dwindled to around 200 — a third of the number at the start of the week.

“A lot of people left in a hurry. Many went to sleep in the countryside,” said 31-year-old Enel Germain.

On the US side of the Rio Grande, the last of more than 15,000 migrants who had been camped under a bridge in Texas have either been removed or went back to Mexico voluntarily, authorities said.

The Mexican refugee commission is struggling with a backlog of requests for documents, and some migrants have been waiting months for their papers.

Sonja Pierre, who arrived at the border a week ago, said commission officials should come to Ciudad Acuna to help the migrants with documents instead of sending them back to Tapachula.