Amid US border crackdown, some Haitian migrants seek asylum in Mexico 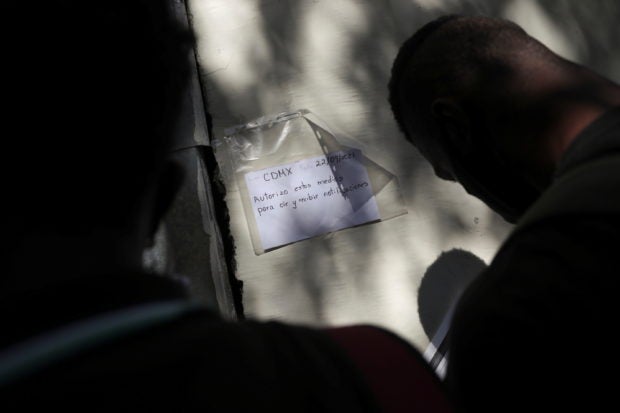 A paper that reads, “I authorize these means to hear and receive notifications” is pictured next to migrants from Haiti line up to regularize their migratory situation outside of the Mexican Commission for Aid to Refugees (COMAR), in Mexico City, Mexico September 22, 2021. REUTERS FILE PHOTO

MEXICO CITY — Hundreds of Haitian asylum seekers congregated outside Mexico’s refugee agency in the capital and in shelters in the northern city of Monterrey on Wednesday, as migrants deterred by a crackdown at the U.S. border sought legal status in Mexico.

Nearly 10,000 migrants, mainly Haitian, remain in worsening conditions in an impromptu camp that sprang up under a bridge spanning the Rio Grande from the Texas town Del Rio to Mexico’s Ciudad Acuna.

In recent days, U.S. authorities have removed at least 4,000 people from the site for processing in detention centers. Some 523 Haitians have been deported to their homeland on four flights, with repatriations set to continue on a regular basis, the U.S. Department of Homeland Security said.

Filippo Grandi, the head of the U.N refugee agency, has warned that U.S. expulsions to such a volatile situation might violate international law.

The chaotic scenes at the border and news of the expulsion flights convinced some Haitian migrants transiting through Mexico that it would be better to petition for legal status there, rather than risk crossing the U.S. border.

“My thinking is to find a better life, wherever I find it… I never said it had to be in the United States,” said Wilner Plaisir, a Haitian asylum seeker waiting outside the offices of the Mexican refugee agency COMAR in Mexico City on Wednesday.

“If I can find work, I’ll stay here with my family,” said the construction worker.

Statistics published by COMAR show that 18,883 Haitians applied for asylum in Mexico in the first eight months of this year, the second-highest nationality after Hondurans.