Australia says will be patient on rebuilding ties with France 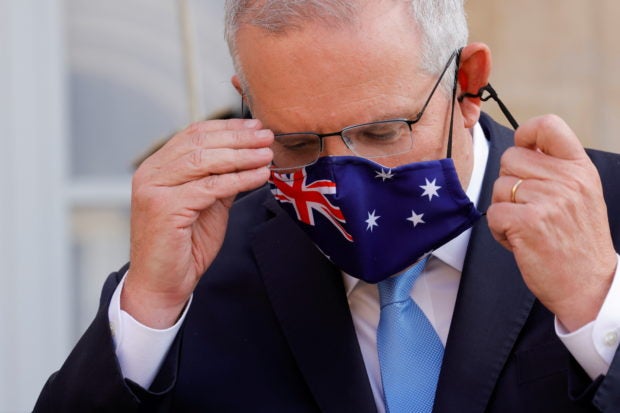 SYDNEY — Australian Prime Minister Scott Morrison said he has tried to arrange a conversation with French President Emmanuel Macron but has been unsuccessful so far, a week after his cancellation of a major submarine deal sparked a diplomatic row with Paris.

Morrison, speaking in Washington on Wednesday, said he would be patient in rebuilding ties with France.

Paris has recalled its ambassadors from Canberra and Washington, saying it was blindsided by Australia’s decision to build nuclear-powered submarines with the United States and Britain rather than stick with its contract for French diesel submarines.

Macron and U.S. President Joe Biden spoke by telephone on Wednesday to smooth relations, and France said its ambassador would return to Washington next week.

However Morrison, who is in the United States for a series of meetings this week, said he had tried to arrange his own call with the French President but had not yet been successful.

“Yes, we have. And the opportunity for that call is not yet. But we’ll be patient,” Morrison said after meeting U.S. lawmakers to discuss the submarine deal and a new security alliance with the United States and Britain dubbed AUKUS.

Morrison said he understood France’s disappointment and noted the cancellation of the submarine contract, initially valued at $40 billion and more recently at $60 billion, meant the issues were different to those between Washington and Paris, and they would take more time to work through.

“I look forward and when the time is right and when the opportunity presents that we will have a similar discussion,” he said.

Morrison said both the deal for Australia to establish a nuclear-powered submarine fleet and the new Australia, UK, U.S. tripartite security alliance (AUKUS) had received bipartisan support during his meetings with U.S. lawmakers and officials.