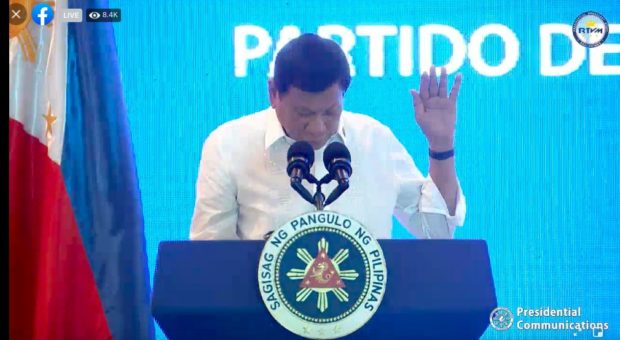 MANILA, Philippines — A faction of the PDP-Laban on Tuesday decried the “incomplete” questions on a survey about President Rodrigo Duterte’s vice presidential bid in the 2022 elections.

A recent SWS survey showed that majority of Filipinos believe Duterte’s vice presidential candidacy “violates the intention of the Constitution.”

Respondents were asked whether they believe the proposed Duterte’s candidacy for vice president in the 2022 elections “violates the intention of the Constitution, which should first be amended before he may run for office again,” or that he should run “because they would like his management of the government to continue,” which the PDP-Laban led by Energy Secretary Alfonso Cusi said was “incomplete.”

“We feel that the questions are incomplete. The survey only asked the respondents if they view President Rodrigo Duterte’s decision to run for Vice President as unconstitutional,” PDP-Laban Secretary General Melvin Matibag said in a statement.

“To give a more accurate sentiment of our people, the survey should have also asked the obvious question: ‘If the Constitution allows President Duterte to run for Vice President, would you vote for him?’” he added.

Matibag noted that former presidents Joseph Estrada and Gloria Macapagal Arroyo were allowed to run for and hold other public posts after their terms as chief executive.

Despite this, Matibag said the PDP-Laban faction is “encouraged” that there is a 40% base that are satisfied with the performance of Duterte and “want continuity.”

In the survey, 39% of Filipinos answered they want President Duterte to vie for the vice presidency.

“This is a strong base in a multi-party election setting,” Matibag said.

“We are mindful of the opinion of the general public but this particular survey is just a snapshot of the public sentiment in a particular time. Ultimately, the question of Constitutionality rests with the Supreme Court,” he added.

Duterte has accepted the nomination of a faction of PDP-Laban to run for vice president. He has already signed the party’s certificate of nomination and acceptance.

The PDP-Laban, however, is still convincing Senator Bong Go to be Duterte’s running mate.