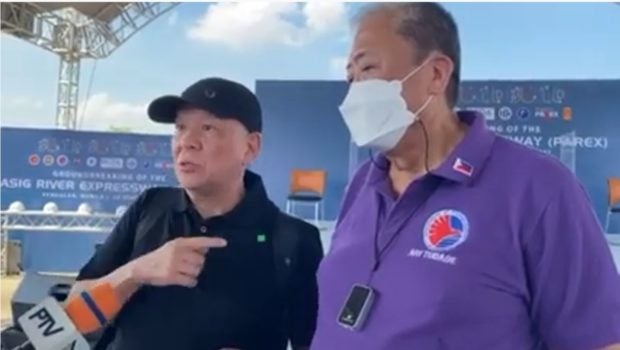 Ang said Tugade is the type of person who will go the extra mile to deliver what is needed by the public from the government, especially at this time of the pandemic.

According to Ang, without the effective partnership between SMC and the Department of Transportation (DOTr) under the leadership of Tugade, needed projects to alleviate the effects of the COVID-19 such as the free transportation for frontliners, free use of the Skyway Stage 3 and free fuel for frontliners, would not have been possible.

(But as you can see, because of him, during the pandemic, we’ve been able to provide free toll to all of the frontliners and the buses used by the DOTr in transporting our fellow Filipinos. Because of him, he said don’t charge just yet in the newly opened Stage 3 Skyway, a few months this had been free, we lost billions there but it is OK we’re not greedy for money.)

Ang made the remarks at the groundbreaking of the Pasig River Expressway (PAREX) project.

Ang said that what struck him the most about Tugade is his palpable concern for the ordinary Filipino who is struggling to survive the pandemic.

The SMC COO was impressed when Tugade requested him to postpone the imposition of toll hikes amid the pandemic, and to strike a careful balance between business and the public’s needs.

(Secretary Tugade said to me, Ramon our people needed our support, let’s not judge and impose hike in your tollway. Let’s show our people that we are doing what we can to help in providing good life for them.)

With this, Ang said Tugade will always have his support

(So where else can you see a person like that, so on that note, can you see how much my support would be? Also 100 percent.)