Rift between PDP-Laban factions unlikely to be mended — Cusi wing 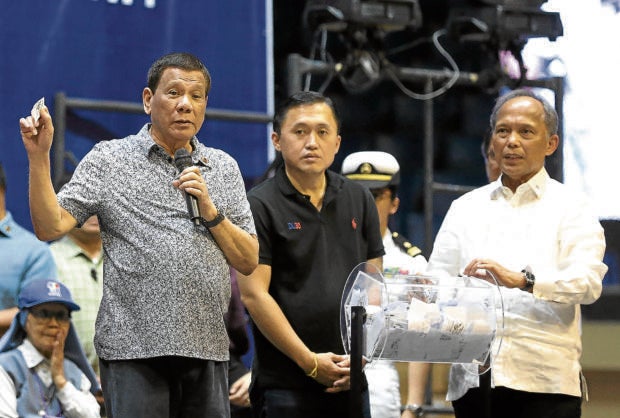 ADMINISTRATION PARTY LEADERS President Rodrigo Duterte, his former aide, Sen. Bong Go, and Energy Secretary Alfonso Cusi grace a summit of tricycle operators and drivers in Pasay City in this photo taken in 2019. Go has declined the nomination by a faction of the administration party PDP-Laban, led by Mr. Duterte and Cusi, to run for president in 2022. —INQUIRER FILE PHOTO

MANILA, Philippines — The infighting between personalities claiming to be the legitimate officials and members of the PDP-Laban is already beyond resolution, an official of a party faction said Monday.

The PDP-Laban has been split into two factions: one led by Energy Secretary Alfonso Cusi which wants Senator Bong Go and President Rodrigo Duterte to be the party’s standard bearers in the 2022 elections and the other is led by Senators Koko Pimentel III, which supports the candidacy of Pacquiao.

“I think we’re beyond that already,” he said in an online press briefing when asked if it’s possible that the two groups can reconcile and unite since there is no overlap in their preferred presidential and vice-presidential bets.

Senator Go has not accepted the PDP-Laban’s nomination to run for president while Pacquiao has already declared. Also   Duterte intends to run for vice president under the party’s banner.

“We already extended a lot of courtesy to them, a lot of invitation to talk and despite of that hindi naging maganda ‘yung mga naging response and publicly marami nang sinabi si Senator Pacquiao at criniticize niya ‘yung administration,” he said.

(Senator Manny had said many things in public where he criticized the administration.)

(I don’t think that will still be possible.)

The rift in the political party started when Pacquiao challenged Duterte over his stance on maritime issues with China and his record on fighting corruption.

He was then voted out as PDP-Laban president, but this was rejected by his group.

Pacquiao’s criticisms made it more unlikely for the two factions to make up, Matibag said.

“Iba na ‘yung linya ni Senator Pacquiao. He’s already campaigning like an opposition candidate, no longer like an administration candidate  or a PDP candidate,” he said.

(Senator Pacquiao has changed his tune.)