Syrian migrants allowed in by Merkel vote to choose her successor 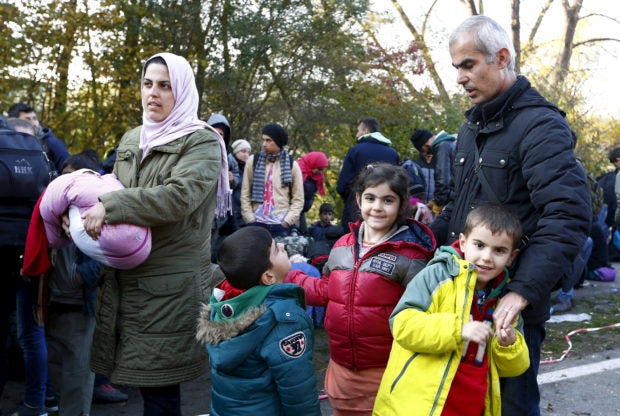 BERLIN — Tarek Saad is keen to help other Syrian refugees who have fled the war in their homeland to make a new home in Germany and he sees the federal election on Sept. 26 as an opportunity to do just that.

Saad is campaigning in his adopted state of Schleswig-Holstein on the Baltic coast for the Social Democrats (SPD), a party he joined in 2016, just two years after he arrived in Germany bearing two gunshot wounds he had survived in Syria.

“I thought the things making my life difficult must be tormenting others as well. To overcome them as quickly as possible, one should be in a political party,” said the 28-year-old student of political science.

“Our parents lived under a different political system for long years (in Syria)… This is an opportunity to develop a new generation (in Germany),” said Saad, who like many refugees will vote for the first time as a German citizen.

Chancellor Angela Merkel‘s decision to open the door to hundreds of thousands of Syrian refugees in 2015 was a defining issue of Germany’s last federal election campaign in 2017.

Not all newly naturalized refugees are as clear as Saad about their voting intentions.

“I am happy to have this opportunity but I am being cautious and maybe I won’t vote,” said Maher Obaid, 29, who lives in the town of Singen near the Swiss border.

Obaid, naturalized in 2019, said a lack of clarity among the parties on foreign policy issues, especially Syria, was behind his hesitation.

A 2020 study by the Expert Council on Integration and Migration (SVR) found that only 65% of Germans with a migration background voted in 2017, against 86% of native-born Germans.

Language fluency and socio-economic situation were two factors determining migrants’ participation, along with the length of their stay, the study found.

“The longer a person stays in Germany… the more likely they are to feel they understand and can participate in political life,” it said.

Historically, migrants from southern Europe and Turkey who came as guest workers saw the Social Democrats as the party that best represented their interests, a study by the DIW research institute showed.

By contrast, Syrians were more likely to support Merkel’s conservatives who shaped the migration policy from 2013 to 2016 when the majority of them arrived in Germany, the study found.

But with Merkel bowing out of politics after 16 years at the helm, many Syrians are now making different calculations.

“Syrians should be very smart … What Merkel did was right but what is her successor doing?” asked Abdulaziz Ramadan, head of a migrant integration organization in Leipzig who was naturalized in 2019.

An informal poll among members of a Syrian migrants’ group on Facebook showed most would now vote for the SPD, followed by the Greens, if they were entitled to vote. The option “I don’t care” was the third choice.

Mahmoud Al Kutaifan, a doctor living in the south-western city of Freiburg, is among the few Syrians who were naturalized in time to vote in the 2017 election.

“Out of emotion, I voted then for the party of Mrs. Merkel because she supported refugees,” he said.

While he has not regretted that decision, he, like many other German voters pondering the post-Merkel era, is unsure how to cast his ballot this time round.

“The election date is approaching but I honestly haven’t decided yet.”