San Marino abortion debate heats up ahead of historic referendum 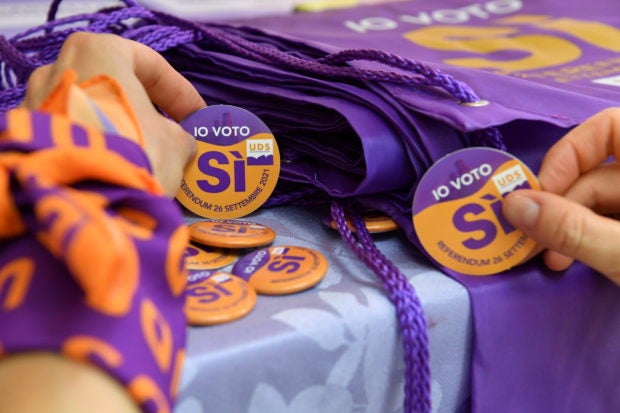 SAN MARINO — One of Europe’s staunchest opponents to legal abortion could fall on Sunday when San Marino, a tiny and deeply Catholic republic landlocked in Italy, holds a referendum to overturn a law dating back to 1865.

A “Yes” vote will bring some relief for pro-choice supporters further afield who have been dismayed as authorities in countries like Poland and in the U.S. state of Texas have tightened laws.

In the mountainous enclave of 33,000 people, women who end their pregnancies risk three years’ imprisonment. The term is twice as long for anyone who carries out their abortion.

As the campaign enters its final week emotions are running high between traditionalists and the referendum’s promoters, with hard-hitting posters on the medieval streets.

Vanessa Muratori, a member of the San Marino Women’s Union, believes the Sept. 26 plebiscite will crown a personal 18-year battle to give San Marino women the same rights as in Italy, where abortion has been legal since 1978.

“I care about my country and I want it to be civilized,” she says. “I feel like a link in a chain of women’s emancipation that goes beyond San Marino.”

Elsewhere in Europe, the Mediterranean island of Malta, and the micro-states of Andorra and the Vatican City, another Italian enclave, still ban abortion altogether.

Muratori set up a feminist association in 1994 and presented a bill to legalize abortion to San Marino’s legislative council in 2003. It received just two votes in favor and 16 against.

The experience brought home to her the extent of the religion-based resistance to change, and convinced her that a well prepared campaign was needed to win over her compatriots’ hearts and minds.

Success on Sunday will allow abortion up to 12 weeks of pregnancy and thereafter only in the case of the mother’s life being in danger or of grave malformation of the fetus.

In Europe’s last referendum on abortion, the British Overseas Territory of Gibraltar voted in June to ease what remain extremely strict curbs.

Ireland legalized abortion in a far higher-profile referendum in 2018, while this month the state of Texas went in the other direction, introducing a law that bans most abortions after six weeks of pregnancy.

Social progress has always been slow in San Marino.

Women did not get the right to vote until 1960, 14 years after surrounding Italy, and have only been allowed to hold political office since 1974. Divorce was legalized in 1986, some 16 years after Italy.

Nonetheless, Muratori’s Women’s Union, campaigning from a gazebo in a children’s playground near the Italian border, has made inroads into the conservative mentality, and gathered 3,000 signatures to launch the vote, three times more than required.

“From my point of view this referendum shouldn’t even be necessary, choosing whether to have a baby or not should be part of a woman’s human freedom,” said Anita Alvarez, a 20-year-old student.

The ‘No’ campaign is equally determined. Using the slogan “one of us,” its core message is that the unborn child should have the same rights as all San Marino citizens.

Marina Corsi, a pharmacist active with the ‘NO’ committee, said this principle should not be compromised even in cases of rape or the certainty of severe disability for the unborn baby.

“It is not the baby who is guilty in rape cases, it is the rapist who should be punished, not the child,” she said.

As things stand, San Marino women wanting an abortion normally go to Italy, where they can only get one privately, at a cost of around 1,500 euros ($1,766).

“Women are forced to seek healthcare …as criminals because they are rejected by their own state,” said Karen Pruccoli, a businesswoman who is a member of the ‘YES’ committee backing the referendum.