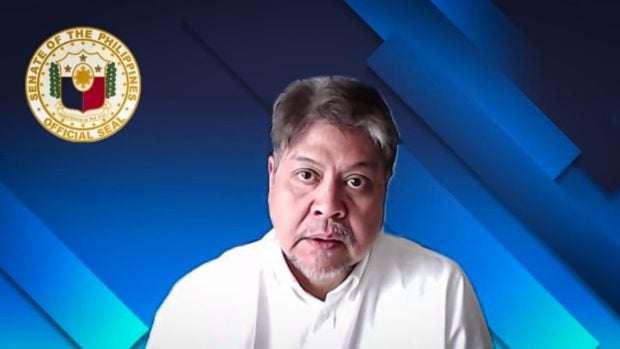 Sen. Francis “Kiko” Pangilinan seeks clarification from officials of the Department of Health and the Procurement Service of the Department of Budget and Management as to why they accepted RT-PCR kits from Pharmally Pharmaceutical Corp which had six-month expiry dates when the DOH required expiry date was from 24 to 36 months.  (Screen grab/Senate PRIB)

MANILA, Philippines — The Procurement Department-Department Budget and Management (PS-DBM) was questioned on Friday why it purchased RT-PCR kits worth around P5 billion despite failing to meet specified requirements.

According to Senator Francis Pangilinan, inspection reports signed by PS-DBM show that the purchased testing kits only have a six-month shelf life.

However, the senator added that the required specifications per the testing kits’ shelf life should have been at least 24 to 36 months from the date of delivery.

Pangilinan said the testing kits were purchased in April and May last year and delivered in September of the same year.

Former PS-DBM official Mervin Tanquintic, who signed some of the inspection reports, said they also noticed that the testing kits did not meet the specifications and discussed it with the Department of Health (DOH).

“It was determined that kits would be consumed prior to the expiration date,” Tanquintic said.

Pangilinanpointed out that testing kits should be cheaper the closer to their expiration date.

(This is number one, overpriced. Number two, the specifications are not correct and violate what the DOH provided.)

After further grilling, Tanquintic pointed his finger at the health department, saying: “It was acceptable to the DOH inspection at that time.”

Tanquintic likewise admitted that deliveries that did not meet the required specifications must be rejected in other transactions.

Francisco Duque concurred with Tanquintic’s remarks and highlighted the need for testing kits at the time. However, Duque said they were unaware the testing kits would expire in six months.

(In your question as to why we accepted it even if it’s not 24 to 36 months, at that time, the need for testing kits was very acute. The DOH did not know that almost all of the testing kits are expired in six months.)