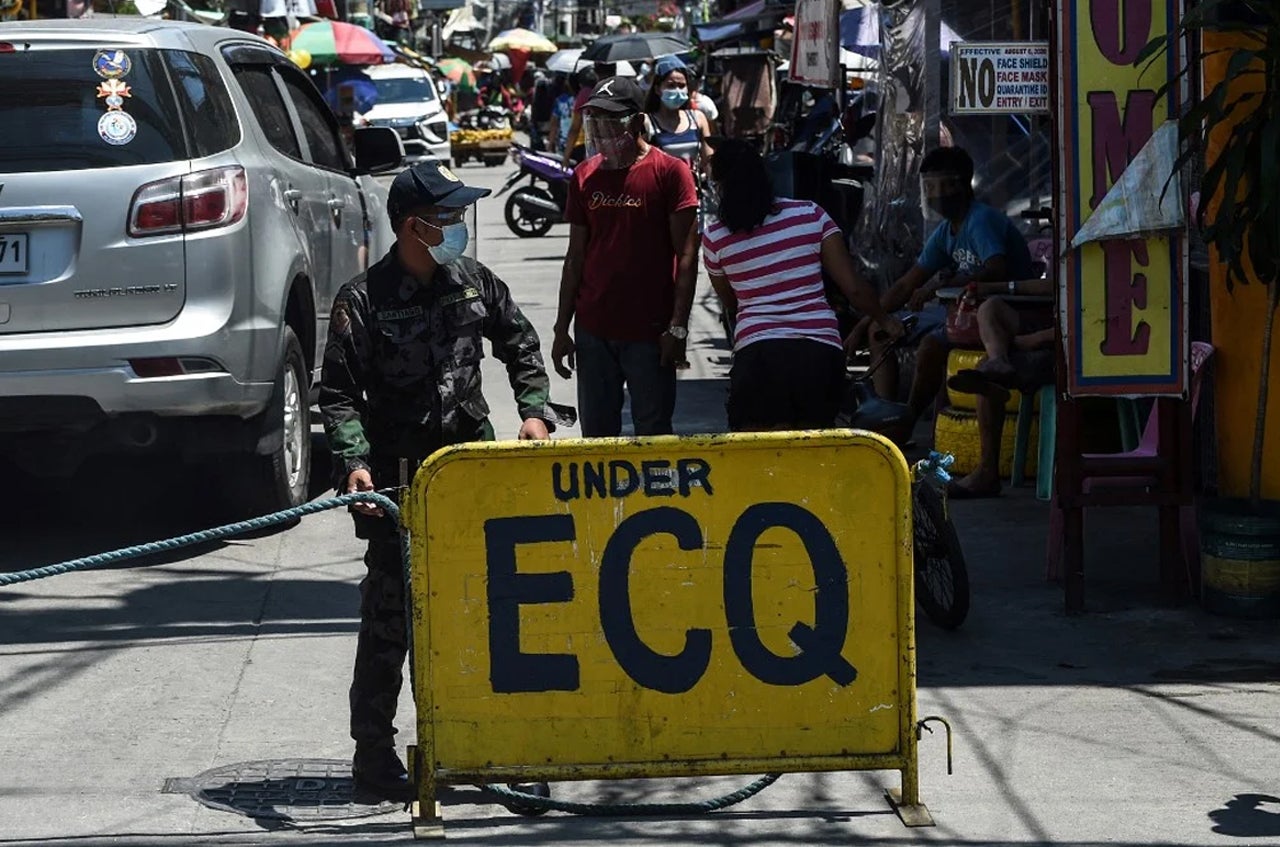 A police officer is stationed in a locked down area in Metro Manila. FILE PHOTO

MANILA, Philippines—After over a week of delay, the Philippine government finally decided to implement a shift in community quarantine status for Metro Manila to a new system, which was supposedly simpler, starting on Sept. 16.

Metro Manila has been placed on Alert Level 4 until Sept. 30 as part of the pilot run of the new system of lockdown, which officials called granular because it would not cover entire cities or entire regions.

This was after the government deferred the supposed implementation of the new system on Sept. 7.

A four-level alert system, to be assigned by local government units (LGUs) in their areas, determines if establishments in closed areas, crowded areas, and those that involve close contact would be allowed to operate and at what capacity.

While the government seems to be more prepared for the pilot implementation of the new scheme the second time around, here are some crucial COVID-related data and issues to be considered or addressed as Metro Manila shifts to a new form of lockdown. 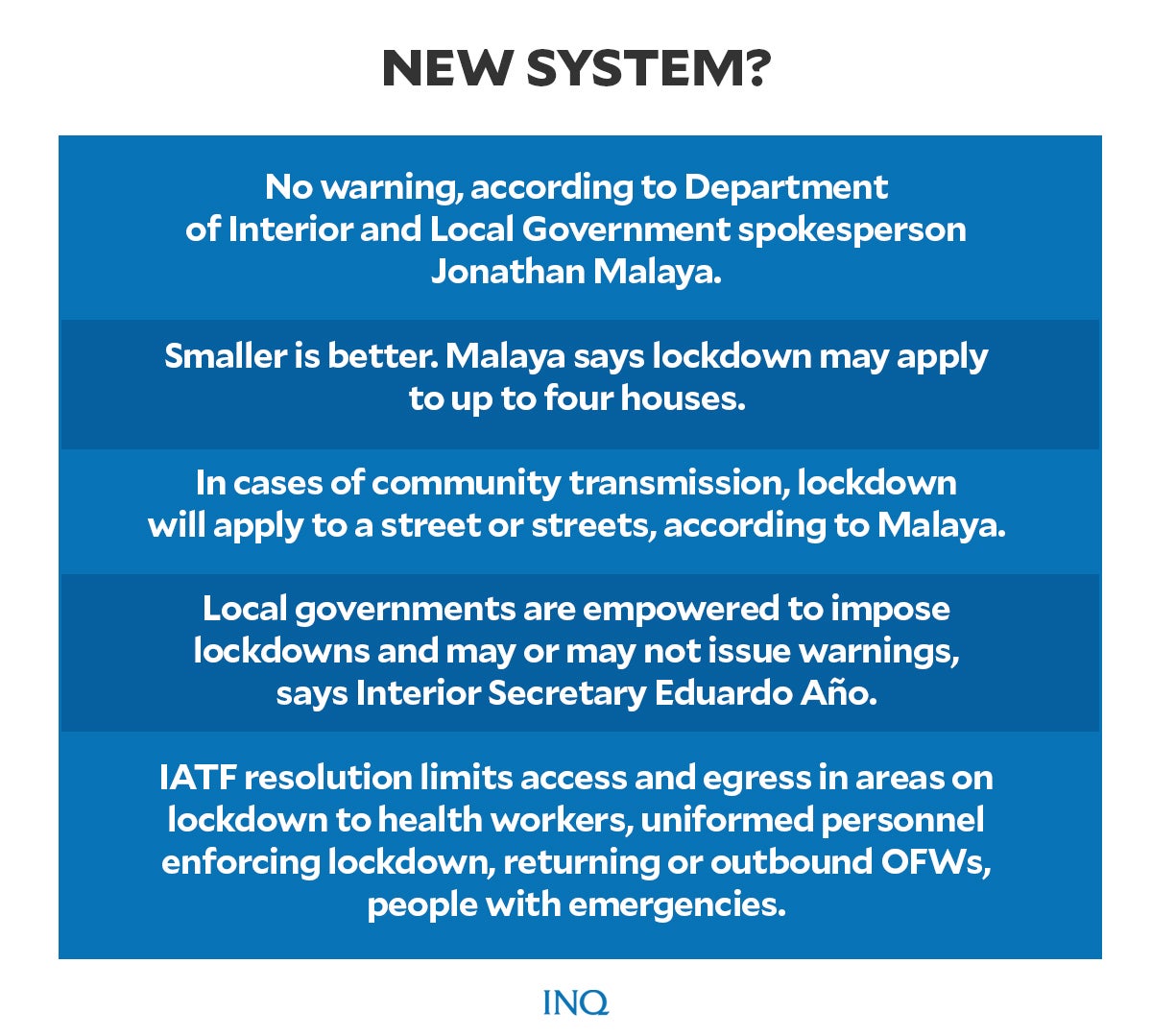 In a radio interview on Sunday (Sept. 12), Department of the Interior and Local Government (DILG) spokesperson Jonathan Malaya said the pilot run for a localized lockdown system will not come with warnings.

“The smaller the granular lockdown imposed, the better for our countrymen. If possible, only one, two, or four houses [will be] covered. If there’s community transmission, only a street,” he said.

“But it will not come with a warning. You’ll find out only once imposed. The only one to know will be the city health office, which has the data,” said Malaya, adding that warnings could “defeat the purpose” of the government plan.

But Interior and Local Government Secretary Eduardo Año on Tuesday (Sept. 14) said there have been revisions in the new lockdown system.

Año said the local government or local officials have the authority to declare a localized lockdown. “So actually it’s up to them whether they will give a warning or not,” he said in Filipino in an interview with GMA’s Unang Hirit radio program.

According to IATF guidelines, persons who may enter and exit areas on localized lockdown were health workers, uniformed personnel enforcing the restrictions, returning or outbound overseas Filipino workers, and those with emergencies.

Prior to the government’s announcement on the new lockdown scheme in Metro Manila, Local Government Undersecretary for Barangay Affairs Martin Diño reiterated that there was a need to penalize quarantine violators.

“We will file a case against those who will violate [the lockdowns],” Diño said in a radio interview over dzBB last Sept. 9.

According to him, there’s already a law that can be used to charge violators.

The law he was pertaining to was Republic Act No. 11332, or the Mandatory Reporting of Notifiable Diseases and Health Events of Public Health Concern Act.

Under RA11332, the following are considered prohibited acts:

READ: What you need to know when arrested for quarantine violation

However, Justice Secretary Menardo Guevarra clarified in 2020 that arrests could be made only when there is a “serious resistance or disobedience” to authorities.

“It is your obligation to report to the barangay so they can get the names and file cases [against the offenders],” he said speaking in Filipino.

“We are protecting lives here. [Violating quarantine rules] is worse than stealing something from someone because you are robbing peoples’ lives,” he added.

Human rights advocates, on the other hand, have been protesting against excessive penalties and punishment for quarantine violators.

The Commission on Human Rights (CHR) described excessive punishment as an “overreach” on quarantine rules following reports of strenuous exercise routine imposed on quarantine violators as punishment for violating curfew—which led to the death of 28-year-old Darren Peñaredondo in April.

“Excessive punishments and fines which are punitive in nature and disproportionate with the violation represent an overreach of the enforcement of quarantine rules and regulations,” the CHR said in a statement.

Also in April, another alleged quarantine violator died due to excessive violence used by some government personnel in enforcing curfew policies.

CHR said the strict measures are “tantamount to torture” and “the reason for the deprivation of the utmost right to life.”

However, Diño insisted that punishment and penalties should be imposed—especially during the pilot run for the new lockdown scheme.

“The government is already too kind,” he said.

“Human rights [groups question these measures]. But when we don’t impose strict rules…there are already two million individuals who contracted [COVID-19] in the country,” he added.

Quarantine terms have been evolving—from “community quarantine” to “granular”—and re-implemented countless times but COVID cases continued to rise, with 2,266,066 total cases as of Sept. 14.

READ: Bubble, circuit breaker anyone? The birth of a new COVID lexicon in PH

On Sept. 11, while Metro Manila was on modified ECQ and some areas under less restrictive lockdown systems, the Department of Health (DOH) reported an all-time high daily COVID case of 26,303.

The third highest daily count logged since the coronavirus pandemic started in 2020 was on Aug. 30, with 22,366 new COVID-19 cases.

Around this time, Metro Manila was on ECQ, the most stringent form of community quarantine.

Between March and April, when Metro Manila and four adjacent provinces—Rizal, Bulacan, Cavite, and Laguna—were on ECQ for the second time since 2020, the country set a new record for highest single-day increase in COVID cases.

Aside from the consistent increase in the number of infected persons in the country, health care workers continued to feel overwhelmed despite strict quarantine measures implemented by the government to prevent transmission of SARS Cov2, the virus that causes COVID-19, and its variants.

Hospitals are again reaching full capacity as more COVID-19 patients get admitted amid the heightened threat of COVID-19 due to its various variants, especially the highly transmissible Delta.

Vaccination and other measures

For Dr. Rafael Castillo, dean emeritus and lead faculty member for research of the Fame Leaders’ Academy, the government is “sabotaging its own efforts to curb the current outbreak [of COVID-19 cases]” by imposing lockdowns amid the ongoing vaccine drive.

“[W]e’re conducting mass vaccinations in a not too well-organized manner, with hundreds and thousands congregating, making these vaccination centers superspreader venues,” said Castillo, who also writes a column for the Inquirer.

“The lockdown is not working because we’re neutralizing its impact with the mass vaccinations, which we’re even escalating even in areas with unbridled outbreaks,” he said.

According to the World Health Organization (WHO), lockdowns can slow down COVID-19 transmissions as it limit contact among people.

“However, these measures can have a profound negative impact on individuals, communities, and societies by bringing social and economic life to a near stop,” said WHO.

“Such measures disproportionately affect disadvantaged groups, including people in poverty, migrants, internally displaced people and refugees, who most often live in overcrowded and under resourced settings, and depend on daily labour for subsistence,” it added.

In order to achieve herd immunity, WHO said a substantial proportion of a population should receive vaccines.

Vaccine czar Carlito Galvez Jr. on Sept. 9 said the government has administered a total of 37,176,513 doses of COVID vaccines.

Over 15 million Filipinos are also now fully vaccinated against COVID, he said.

Still, the WHO acknowledged that lockdowns are imposed in some countries to buy time.

“Governments must make the most of the extra time granted by ‘lockdown’ measures by doing all they can to build their capacities to detect, isolate, test and care for all cases; trace and quarantine all contacts; engage, empower and enable populations to drive the societal response and more,” the WHO said.

This was echoed by Vice President Leni Robredo, who pushed for more COVID testing in order to effectively isolate areas where rapid community transmissions are taking place.

“One of my recommendations was to increase testing at 120,000 a day. I was telling you earlier that our positivity rate was at 21 percent, at 8,900 cases,” said Robredo in an interview with CNN Philippines.

“But when you look at how many tests were conducted, we are still at the level before this surge, which is in the range of 50,000 tests,” Robredo said.

“This only means that we should really test more,” the Vice President said.

The international standard for positivity rate, or the rate of virus transmission, should be less than 5 percent, Robredo said.

“So if it’s 21 percent per day we are not testing enough,” she said. “This is something that we have repeatedly recommended since last year—that we should test more,” Robredo said.