Kin appeal to those who witnessed beating of Laguna curfew violator to help them get justice
By: Delfin T. Mallari Jr., Krixia Subingsubing - @inquirerdotnet
Philippine Daily Inquirer / 04:40 AM April 14, 2021 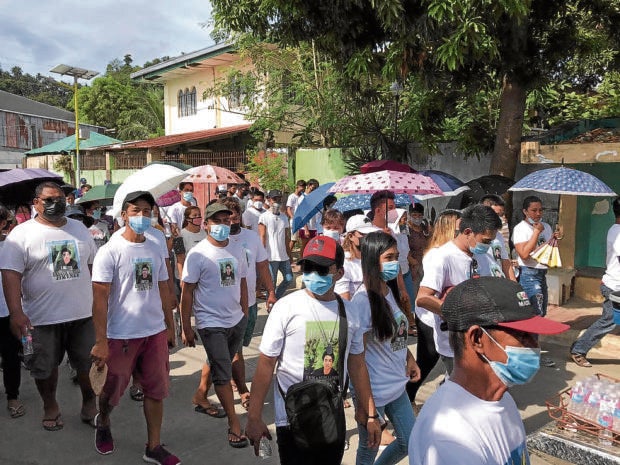 APPEAL Relatives and mourners who joined the funeral procession for Ernanie Jimenez, the curfew violator who died after he was beaten by village watchmen in Calamba City, wear shirts seeking justice for his death. —CONTRIBUTED PHOTO

MANILA, Philippines — The excessive violence used by some government workers in enforcing curfew policies is “tantamount to torture,” the Commission on Human Rights (CHR) said on Monday, following reports that village watchers beat and killed a violator from Calamba City in Laguna province.

The CHR condemned how the curfew policy enforced as a lockdown measure was now becoming “the reason for the deprivation of the utmost right to life.” Last week, Ernanie Jimenez, 26, died after he was assaulted by “tanod” (village watchmen) in Barangay Turbina. He was accosted outside of his house at 11 p.m. on April 7, past the curfew imposed across Metro Manila and its neighboring provinces of Bulacan, Cavite, Laguna and Rizal while the area, collectively known as National Capital Region (NCR) Plus bubble, remained under strict lockdown measures.

Jimenez’s death followed that of Darren Peñaredondo, who died of a stroke a day after policemen in Cavite province asked him and other quarantine violators to do 300 rounds of pumping exercises akin to squats.

The commission has already begun investigating these cases—now the latest in a string of alleged abuses committed by local officials enforcing curfew ordinances.

Such cruel acts have included the public shaming of quarantine violators, putting them inside dog cages or even hitting them with sticks.

Since last year, rights groups have maintained that such practices, including the humiliation and physical punishment of quarantine violators, were in clear violation of absolute prohibitions outlined under the Anti-Torture Act of 2009 and the Philippine government’s obligations under the United Nations Convention Against Torture. “Beating a person over a minor offense may be tantamount to torture—an attack to human dignity instead of a corrective measure,” the commission’s spokesperson, Jacqueline de Guia, said in a statement.

“Such excessive punishment can be considered as grave abuse of authority and those who shall be proven to have committed an overreach must be held accountable,” she added.

The CHR reiterated its calls to local governments to only impose community service for quarantine violators as an alternative penalty, instead of imposing intense physical punishments or excessive fines.

“In these difficult times, compassionate and human rights-based approach are essential in implementing quarantine rules to truly address the plight of all, especially the disadvantaged ones,” De Guia said. In Quezon province, relatives of Ernanie appealed to witnesses to help them.

“I appeal to them not to be frightened, or persuaded to back out or accept bribe money. They witnessed everything. I’m pleading to them, be with us until the end,” Juanito Jimenez Jr., the victim’s father, said.

The younger Jimenez was buried in his hometown of Guinayangan (not Tagkawayan as earlier reported) on Tuesday.

“I made a promise before his grave that we will never stop in our quest for justice,” Juanito said in a phone interview after the burial.

Juanito, a retired fireman and now a village councilor, said: “What happened to my son could also happen to their loved ones.”

He also appealed to police investigators to probe the death of his son “with fairness.”

“I faithfully served [the government] for 27 years. Just like you, I have saved lives and properties,” he said. “Please help our family in our search for justice.” Lt. Col. Chitadel Gaoiran, Laguna police spokesperson, said all documents related to the case were ready for filing, noting that the police were waiting for Ernanie’s family to file the formal complaint.

Juanito said the family would travel to Calamba on Wednesday to file the homicide case against suspects Arjay Bahan Abierta and John Oriel Ortiz. INQ