Lawyer directly asks Duterte for his SALNs this time

MANILA, Philippines — After getting rejected twice for asking for a copy of President Rodrigo Duterte’s Statement of Assets, Liabilities, and Net worth (SALN) through the freedom of information, a lawyer opted this time to directly seek the document straight from the Chief Executive.

Atty. Dino de Leon on September 10 wrote to Duterte through Executive Secretary Salvador Medialdea, appealing the denial of his freedom of information request – first in November 2020 by the Malacañang Records Office (MRO) and in July 2021 by the Office of the Ombudsman.

He then requested Duterte “to revisit the MRO’s decision to refuse the issuance of your SALN.”

“Instead, you can, motu proprio, provide the undersigned with a certified copy of all your SALNs ever since you assumed office in 2016,” De Leon also said in his letter to the President.

“Should you find this unacceptable for whatever reason, you are instead requested to provide the undersigned the necessary notarized authorization from you,” he added, citing that one of the requirements of Memorandum Circular No. 1 series of 2020, which the Ombudsman used as a basis to deny him of his request for Duterte’s SALN, is to secure the consent of the SALN declarant. 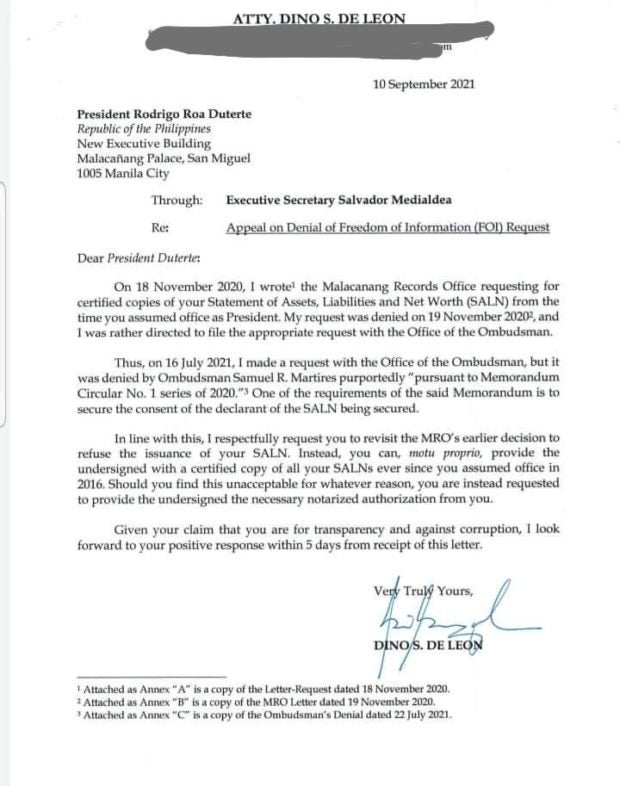 A copy of Atty. Dino de Leon’s letter of request 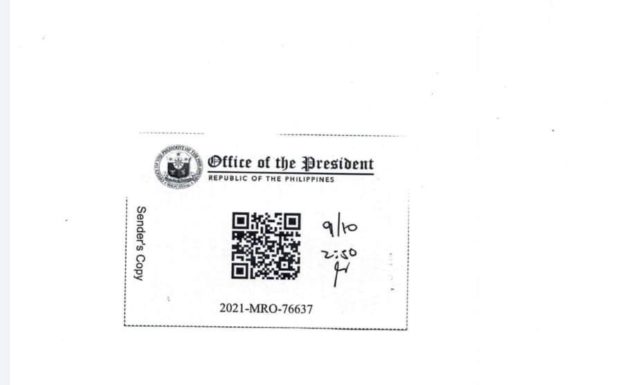 The barcode of receipt on Atty. Dino de Leon’s letter of request

De Leon then reminded Duterte about his supposed pledge for transparency and against corruption.

“Given your claim that you are for transparency and against corruption, I look forward to your positive response within 5 days from receipt of this letter,” he also said.

According to De Leon, he first requested the MRO to release a certified copy of Duterte’s SALN on November 18, 2020. The next day, the MRO denied his request and directed him to file the appropriate request with the Office of the Ombudsman.

On July 16, 2021, de Leon said he made the request with the Office of the Ombudsman. But Ombudsman Samuel Martires denied it “purportedly pursuant to Memorandum Circular No. 1 series of 2020.”

Under the memo, a copy of the SALN may be given to the official or his duly authorized representative, through a court order for a pending case, and if the request is made by the Office of the Ombudsman’s Field Investigation Office/Bureau/Unit (FIO/FIB/FIU) for the purpose of conducting a fact-finding investigation.

The memo further says, “In all other instances, no SALN will be furnished to the requester unless he/she presents a notarized letter of authority from the declarant allowing the release of the
requested SALN.”

Meanwhile, Duterte’s Executive Order on freedom of information or FOI allows the access of government officials’ SALNs in accordance with existing laws, rules, and regulations.

Duterte, however, has not released his SALN to the public since 2018. SALN is being filed annually by government officials.

De Leon has been asking for a copy of Duterte’s SALNs amid corruption allegations in the government, and recently the multi-billion-peso contract that was awarded to Pharmally Pharmaceutical Corp. for the government’s procurement of medical supplies for its COVID-19 pandemic response in 2020. — Zacarian Sarao

Ombudsman willing to be removed from office than make SALNs public