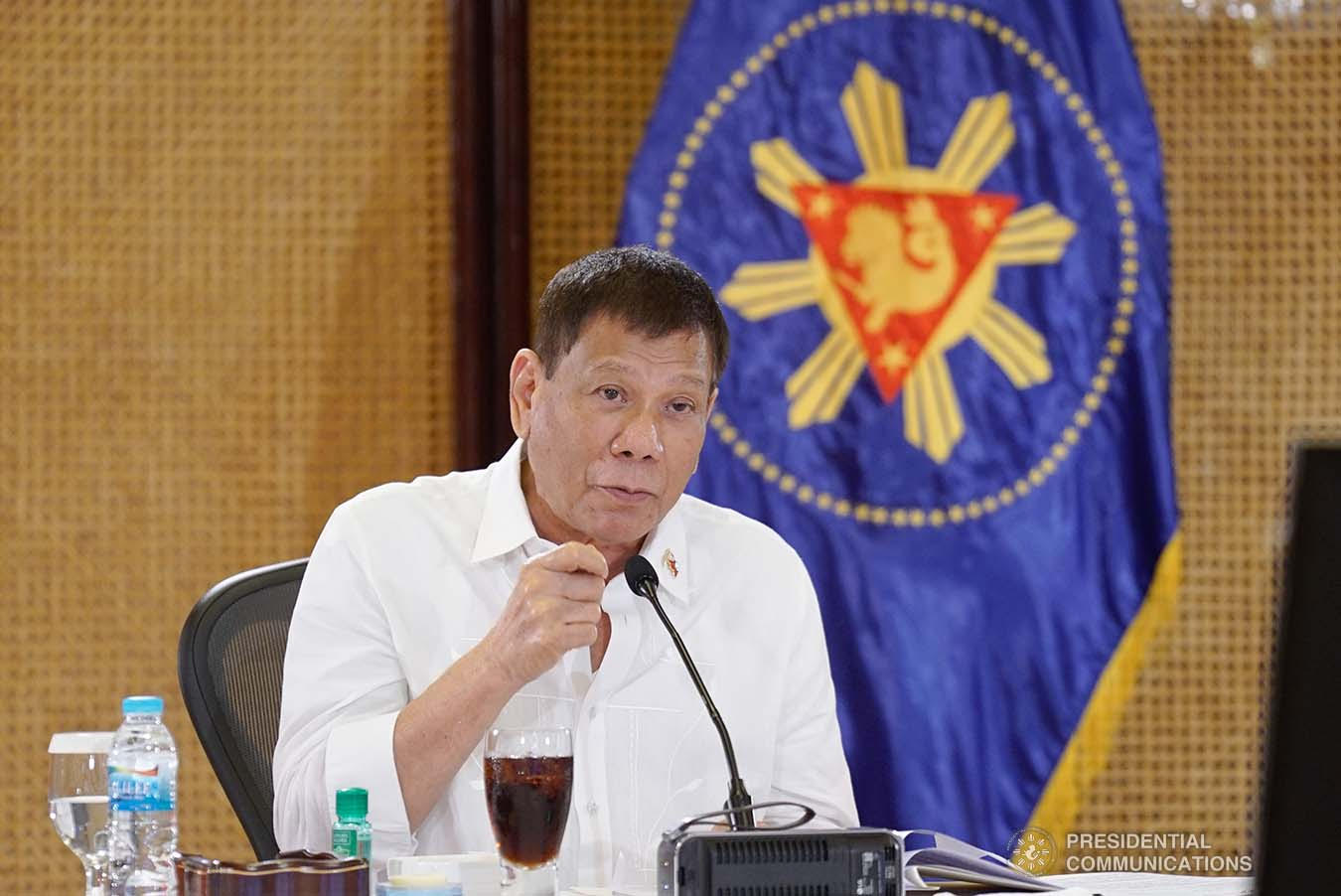 President Rodrigo Roa Duterte talks to the people after holding a meeting with the Inter-Agency Task Force on the Emerging Infectious Diseases (IATF-EID) core members at the Malacañang Palace on September 7, 2021. KING RODRIGUEZ/PRESIDENTIAL PHOTO

MANILA, Philippines—The loose political alliance that helped President Rodrigo Duterte enjoy a majority in the two chambers of Congress has reached a crossroads and all indications are key coalition leaders are going in different directions.

As the 2022 elections draw nearer, the alliance is showing signs of dissipating with key individuals, who had given full or enough support to Duterte, now having plans that have one thing in common—Duterte is not part of them.

Among the key alliance leaders or those who played major roles in the pro-Duterte coalition and are now going their own way were former Speaker Alan Peter Cayetano, former Speaker Pantaleon Alvarez and senators Vicente Sotto III, Panfilo Lacson, Koko Pimentel and Manny Pacquiao.

Cayetano had said he was “fine” with Duterte endorsing Sara, his second eldest child, as candidate for president. But the Taguig representative is changing his tune, saying he was now “considering a presidential bid.”

READ: Cayetano ‘seriously considering’ running for President – or other posts – in 2022 polls

Cayetano was the latest among Duterte’s allies who could be choosing to go a direction other than the President’s.

At the crossroad, too, is Pacquiao, an ally of Duterte on reviving the death penalty and supporter of the President’s controversial war on drugs.

Pacquiao, president of the ruling PDP-Laban, has since seen the party wracked by division and the emergence of a faction led by Energy Secretary Alfonso Cusi, a key official in the Arroyo administration and now major player in the PDP-Laban faction pushing Duterte’s run for vice president.

READ: Pacquiao to Duterte: Stop defending your men being probed for corruption

Pacquiao has since turned critic of what he said was corruption in the Duterte administration, especially the Department of Health. Pacquiao is now with the faction led by Pimentel, whose father the late senator Nene Pimentel, was an original founder of PDP-Laban.

Pimentel had stood by Duterte since 2015 and became Senate president. He now leads the PDP-Laban faction eyeing Pacquiao as presidential candidate.

Alvarez, a long time friend of Duterte in Davao but was ousted as speaker in a 2018 coup in the House of Representatives, now serves as president of Partido Reporma, a political group which senator Panfilo Lacson had joined after confirming a presidential bid.

Lacson and Sotto had been tagged as enablers of Duterte but declared “enough” with Duterte during the launch of their presidential and vice presidential bid on Wednesday (Sept. 8).

Another key PDP-Laban personality who had gone on a different way was Thomas Orbos, former general manager of the MMDA and transportation undersecretary, who now is part of the coalition Ikaw Muna Pilipinas, which is pushing the highly popular Manila Mayor Isko Moreno to run for president.

These erstwhile Duterte allies have each taken different paths away from Sara, who has been touted as the likely replacement of Duterte but has now declared she was not running for president because her father chose to run for vice president. There’s not gonna be a Duterte-Duterte tandem, she said.

For Professor Maria Ela Atienza, of the University of the Philippines’ Department of Political Science, while Duterte still has his loyalists, their commitment to him does not translate to “automatic support” for Sara.

“There are more seasoned national politicians like Cayetano who think that they are more deserving of national posts than the daughter of the president,” she said.

Atienza explained that there is a broad alliance of political personalities, traditional politicians, and families behind the President, but “they are not united by ideology or party programs.”

“They only support a popular President to protect their interests. They compete with one another,” she said.

When he was still foreign affairs secretary in 2018, Cayetano said, “If the President endorses his daughter as the next President, there’s no question, I will support 100 percent.”

Sara has yet to confirm if she will run for president in 2022, but her dad and senator Bong Go, Duterte’s closest confidante, said they would give way to Sara if she decided to run.

Last July, the Davao City mayor, who is leading opinion polls for 2022, said she was open to running for president. She also said that Go, Sen. Sherwin Gatchalian and former defense chief Gilbert Teodoro had expressed interest in running for vice president with her.

Last June, presidential spokesperson Harry Roque said the President told him that he wanted Sara to run for president.

Cayetano’s hint at running for president possibly against Sara was inconsistent with his previous statements that he would support Sara if she ran for president.

In 2019, Sara said Cayetano made a “veiled threat” to “break up” the pro-Duterte coalition in the House of Representatives if Sara endorsed Marinduque Rep. Lord Allan Velasco as speaker.

On Oct. 13, 2020, Velasco was elected speaker saying Sara and Hugpong ng Pagbabago, or HNP, were the “tipping point” in the speakership fight.

The rift between Cayetano and Sara by then became evident.

Atienza said Cayetano, being a traditional politician, sided with Duterte during the years that Cayetano needed Duterte’s popularity to rub off on him.

But Atienza said Cayetano’s support for Duterte had no reciprocity as he competed with other allies in the loose coalition composed of other traditional politicians who are also “angling for better prospects now that 2022 is near.”

“This alliance is currently breaking up because each faction is pursuing personal interests as the 2022 elections near,” she said.

Now that the alliance is breaking up, Diwa Donato, a social and political science instructor, said there was a need “to clearly distinguish them” as the “true opposition” or “opportunists.”

“We have yet to identify where Cayetano belongs after learning his future policies and interests. Will it be to save the country or to save himself?” Donato said.

Atienza said results of the 2016 elections should give lessons to Cayetano and other politicians who now find themselves treading paths different from Duterte’s.

In 2016, while Duterte won as president, Cayetano was not even close to having the most votes as candidate for vice president. He was third in the vice presidential race with just 5.9 million votes compared to Duterte’s 16.6 million votes.

Erstwhile allies of Duterte who are taking the path to a presidential campaign, however, are also heading into costly territory as running for president is not cheap.

While Republic Act No. 7166 limits campaign spending to just P10 per voter, many candidates have spent hundreds of millions of pesos for presidential campaigns. 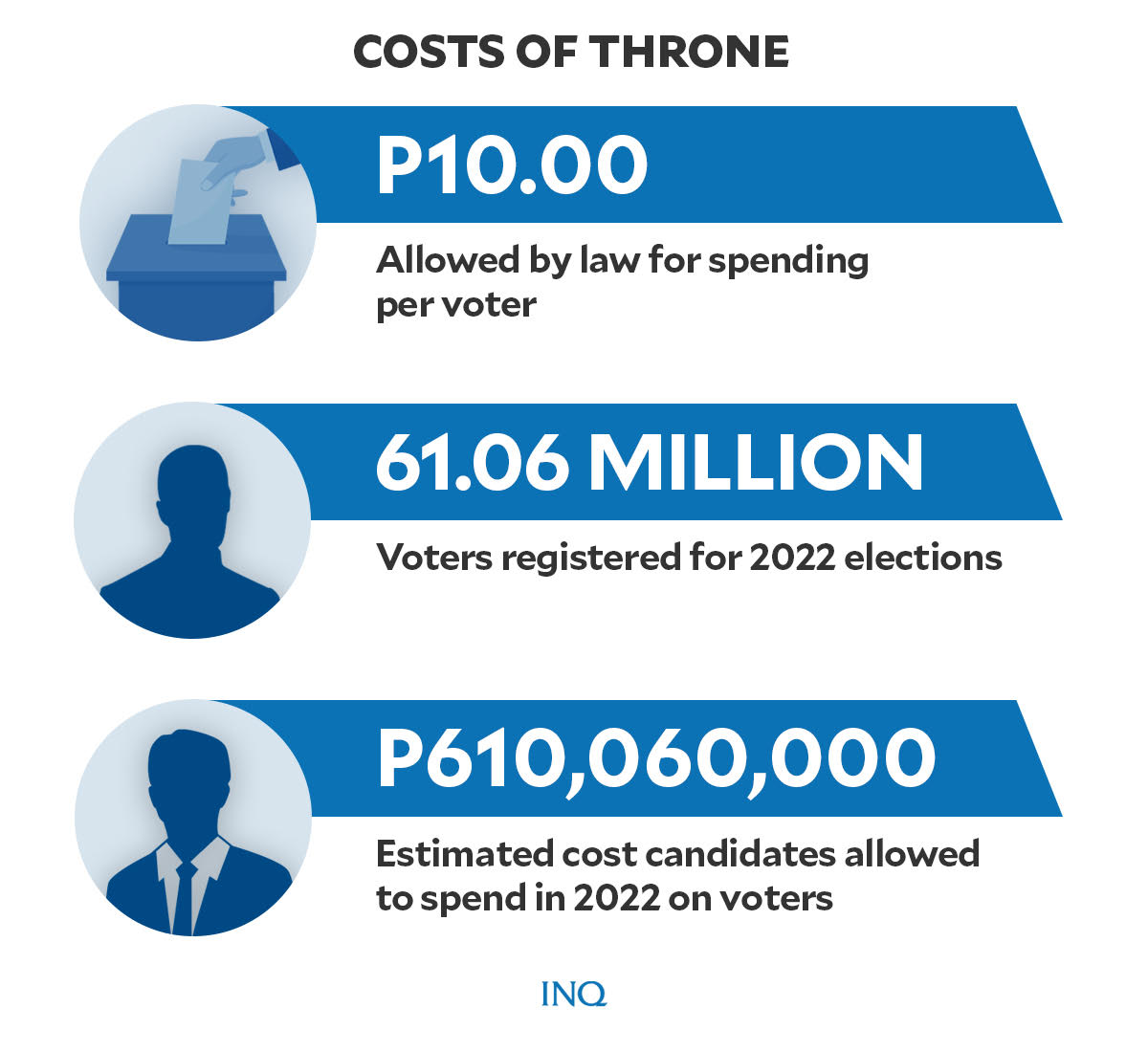 Last Aug. 23, Comelec spokesperson James Jimenez said at least 61.06 million Filipinos are eligible to vote in 2022. This means that a candidate for president may have to spend at least P610.60 million.

There were 54.36 million registered voters in 2016. This meant that a presidential candidate back then needed P543.60 million. 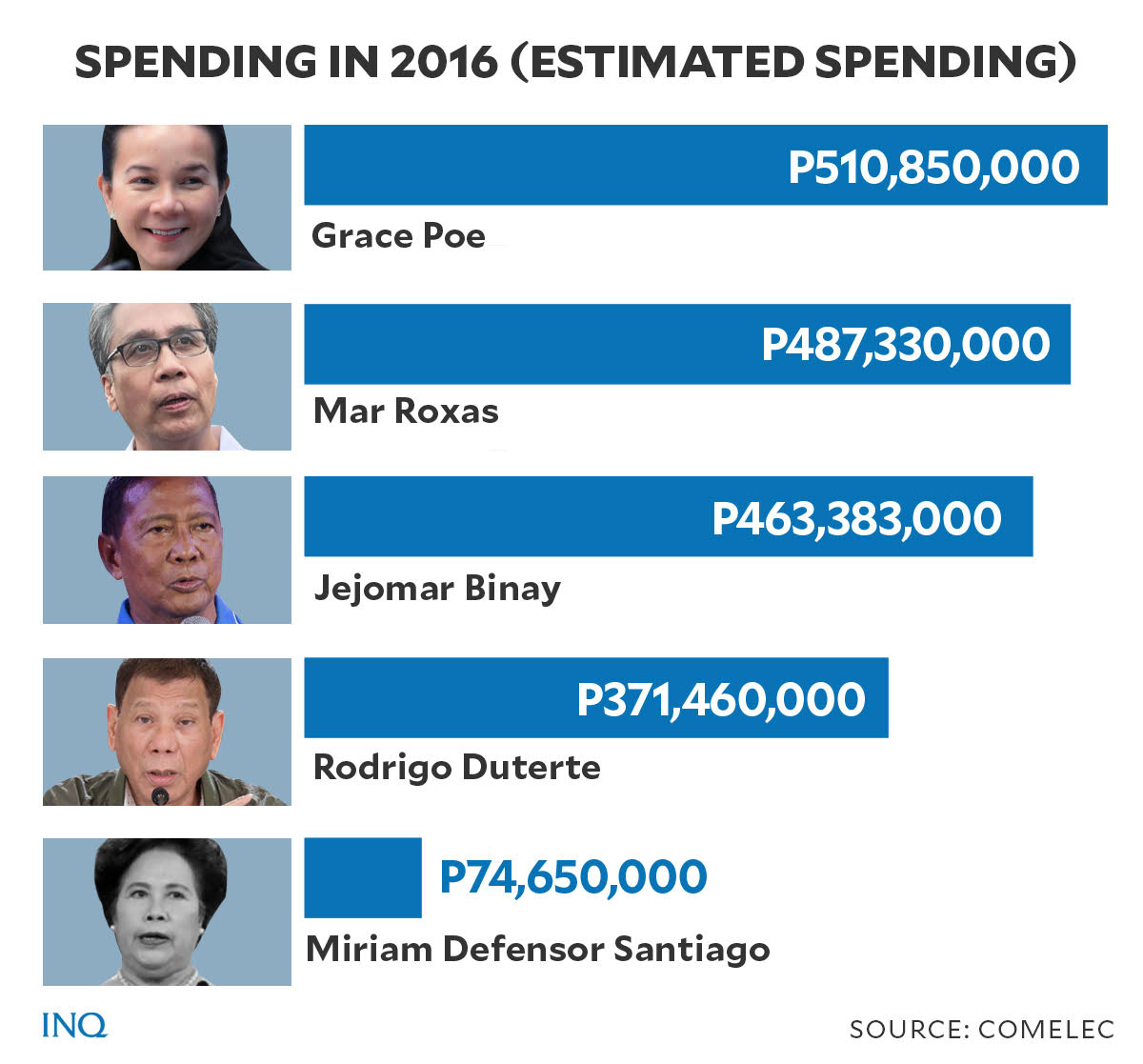 These figures, however, may still change if a new law is signed to increase the cap for campaign expenses of individuals vying for elective posts.

In 2020, the House passed a bill seeking to expand the ceiling for campaign spending to at least P50 per voter.