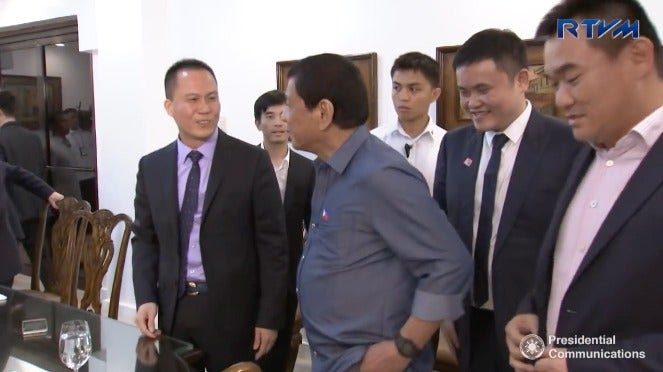 Former presidential adviser on economic affairs Michael Yang with President Duterte during a meeting with officials of Pharmally Pharmaceuticals in Davao City. Image from the March 18, 2017 video of RTVM Malacañang

MANILA, Philippines — Without the need for a “middle man,” the Philippines would have saved P284 million in the procurement of pandemic response supplies in 2020, Senate Minority Leader Franklin Drilon said.

“If there was a government to government transaction, without a middle man, the Philippines would have saved P284 million as commissioned, as fees of Pharmally,” Drilon said in an interview over ABS-CBN News Channel

The Senate blue ribbon committee is currently investigating the controversial procurement of “overpriced” personal protective equipment (PPE), face masks, and shields by the Department of Budget and Management-Procurement Service on behalf of the Department of Health.

The company at the center of the probe is Pharmally Pharmaceutical Corp., which bagged government contracts worth over P8.6 billion in 2020 despite being only several months old and having just P625,000 in paid-up capital.

“It is alleged that the government would have had to look for suppliers because of the tightness of the supply. They even had the Chinese ambassador assist them. If that is so, why do you have to go to a middle man, why not do a government-to-government transaction?” Drilon went on.

The minority leader pointed out that Pharmally earned P284.9 million in 2020 “from zero income in 2019” after winning the contracts.

“Why did you have to go to a middle man when a government-to-government transaction could have been done and I assume the income, net income of Pharmally of over P284 million in 2020 all came from commissions,” Drilon said.

The Senate blue ribbon panel will resume its investigation on Sept. 7.